There were always excuses for why girls died.

i am going to review this carefully, for all of you who were too cool or too civilized to run for copies at BEA and have to wait for october to grab a copy. me, i regret nothing.

when i first heard about this book, there was only a little teaser of a synopsis available, and when i finally got my hands on it, i didn’t revisit it or read anything printed on the ARC – i just dove in blind.

let’s just say i was unprepared for what this was. i’d assumed, from having read all the bardoogs before this, that this would be set in some fantasy realm which roughly correlated to real-world locations, but was entirely fresh and new and magical. so imagine my surprise to read about this girl kicking it in new haven and eating mamoun’s falafel. mind = blown.

those of you who are better about reading what a book is about before you hunker down between its covers will be less surprised, since it pretty clearly states it takes place at yale, but it took me a minute to recalibrate my expectations.

not unpleasantly so, by any means.

bardugo’s first adult novel is… spectacular. and it is emphatically modern—all of its themes of class and race and gender, all of the female rage and elitist entitlement, and alex stern, my new favorite character, teetering on that knife’s edge of the heroine/antiheroine divide.

never fear, there’s plenty of fantasy and magic and all of the brilliance one expects from a bardugo novel, and DAMN, does it have teeth.

Alex felt something dark inside her uncoil. “You’re a flat beast,” Hellie had once said to her. “Got a little viper lurking in there, ready to strike. A rattler probably.” She’d said it with a grin, but she’d been right. All this winter weather and polite conversation had put the serpent to sleep, its heartbeat slowing as it grew lazy and still, like any cold-blooded thing.

it’s a mystery/horror/fantasy cocktail that packs a serious punch. it is fierce. it is ferocious. it’s all sinuous with iridescent scales and fangs.

it ends on a promise of more to come, and i NEED there to be more coming, because i am smitten with alex stern.

That is the danger in keeping company with survivors.

i will keep company with her any day of the week.
if she’ll have me.

an easy five stars, with review TK, but to answer your final question, ms. bardugo:

update: BEA will not be burned down this year. 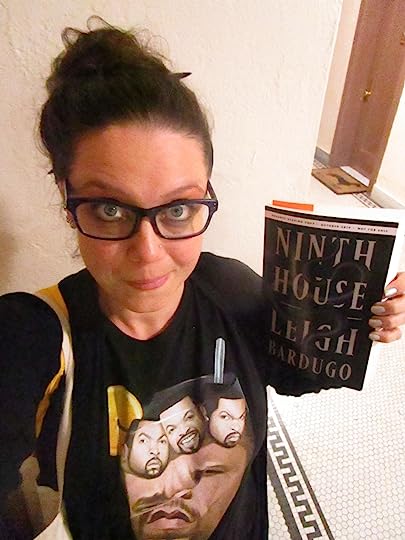 all of the good things at once.