Nick Cave: Mercy on Me by Reinhard Kleist
My rating: 3/5 cats 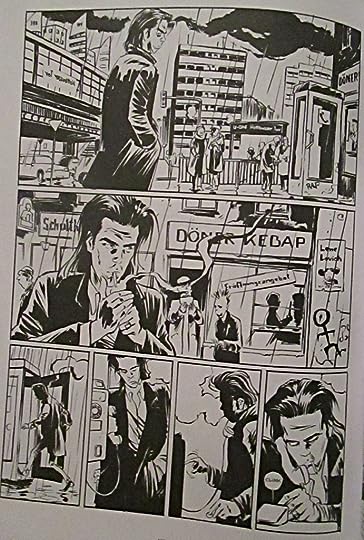 but i figured this one would be cooler, because it’s in graphic novel format, and it’s a mixture of biography and fantasy, in which nick cave interacts with characters from his own songs and novels, many of which are (rightfully) displeased with what he’s put them through. i don’t know how much cave contributed to this project (other than a backcover blurb), or how much kleist made up or drew from the nick cave mythos, but the end result is kind of uneven.

it might be my own lack of interest in hagiography, which is just as bad to me as bios that tear down the heroic gauze. judging solely on the artwork, it’s great, and had it just been a tale of nick cave being confronted by euchrid eucrow or elisa day etc, i think i would have loved it—mostly because kleist imagines euchrid to very closely resemble gollum, which is delightful. 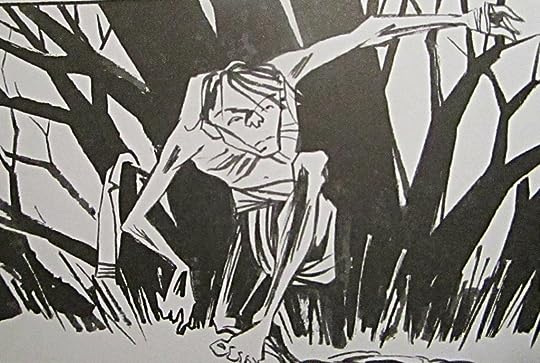 if there’s ever a graphic novel version of And the Ass Saw the Angel, i will for sure buy it 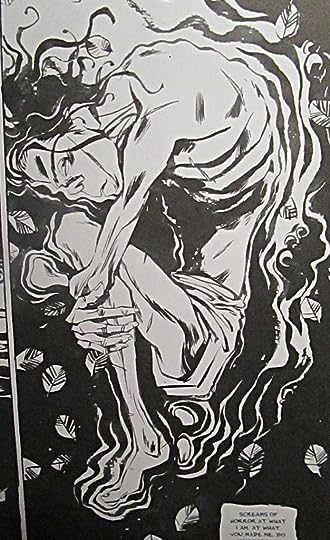 but there’s just so mucha this

all that teenage self-grandeur and “our music will change the world” and “oi punk rock fuck commercial rock and roll” and it’s very…adolescent. which is fine and appropriate for depicting cave’s rowdy reckless younger years, or during his addiction-clouded woolgathering, but in this book, he never quite seems to grow out of it. and that makes me squirm a little.

because i like nick cave—i like the boys next door, i like the birthday party, i like the bad seeds—he puts on a good show, his voice is equally skilled in “howling anguish” as “come hither to look at my etchings;” i’m a fan of his lyrics, his poems, and his novels; with And the Ass Saw the Angel being very close to my heart. his thematic blend of religion, violence, and poetry, appeals to the grit lit lover in me, and he’s probably the artist that paved the way for my appreciation of that stuff during my formative years.

but world-changing? wholly original? nah. that’s a fantasy of adolescence. nothing is truly original, music never changed the world, and there are musicians who scraped my soul closer than nick cave ever did, who were classy enough to acknowledge their predecessors. this book gives a begrudging nod to johnny cash, but cave and pals spend more time talking shit about commercial rock, which in this case means postpunk, a musical period i happen to enjoy very much. nick cave does not get to talk shit about bauhaus, the psych furs, or siouxsie. dude, seriously?

but that’s fine—a lot of it is during cave’s insufferable dostoyevsky-quoting youth, but the book kinds rushes the end. anita (lane) is all over the book and then just vanishes, even though they collaborated after their split, 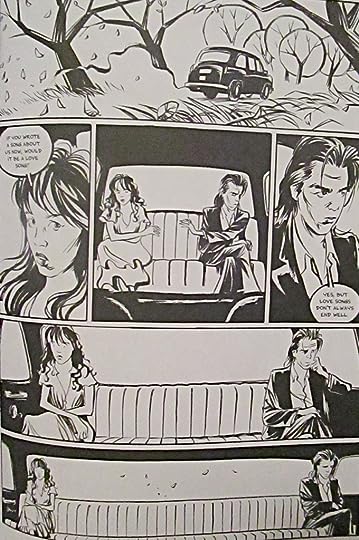 pj harvey and kylie minogue get a single panel mention, and so much is just glossed over. in a breathless sentence, marriage and kids and stability are fact-dropped before moving on. some of cave’s most interesting work is being done during this time, and it’s just barreled through and over. because boatman’s call is too mellow and mopey and piano-y? because there’s no interest in all the excellent musicians who contributed to murder ballads? i, for one, would love to have seen a cartoon shane macgowan. which may be redundant.

this book covers nothing of cave’s post-1999 work, and a lot of the book just feels like rotating hairstyles. it’s pretty, but there’s not enough meat to it. which is, i suppose, what you get when you pick up a biography made of pictures, but i was hoping for a little more oomph.