Love and Other Wounds: Stories by Jordan Harper
My rating: 4/5 cats

i read an early ARC of this, and i’m probably totally not supposed to be reviewing it already, but i’ve been in a bit of a review slump lately, and of the twenty or so books i still have to review, this was the one i was most enthusiastic about reviewing today, even though there’s at least one book i liked more than this one in the bunch. (that sentence is a mess, and gives you an idea of what happens to me during a review slump – i forget how grammar works)

so caveat, caveat etc. the copy i have has a jacked-up table of contents. one story is listed twice, and another is listed under two different titles. this is only relevant because i am going to be reviewing the stories individually, so the order may vary from the finished book, and i’m not sure which title is going to be used for the story so nice they named it twice. i guess we will all know in july.

but let’s be clear – none of these stories are nice. this is grit lit in all its glory, and fans of the genre are going to eat this up. the rest of you – i don’t know what you’ll make of it. fortunately, there are DOZENS of us who love this kind of operatic-violence-in-the-underworlds-of-various-backwoods-locations stuff. this one employs a cinematic brand of storytelling; very visual prose in which things escalate very quickly and are described in stark and vicious detail. but they are also occasionally funny. and they are all better written than what i have managed so far, rusty and dusty as i am.

i appreciate the range of subject matter in this collection. he manages to showcase the entire spectrum of familiar grit lit elements, touchpoint by touchpoint, but the stories are surprising, even to grizzled veterans of the genre like me. they read like dark little o. henry pieces. there’s some callbacking – recurring characters and reverberations, but all of the stories stand alone just fine.

Lucy in the Pit

opening line: If she pisses, she lives.

this man knows what a hook is.

it’s a story about a sixty-pound fighting dog named lucy. and yes – reading about dog fights is gruesome and horrifying, but despite all the uncomfortably graphic detail, there’s also something unexpected in this story: heart. sweetness. affection. this fierce and gutsy dog: Tough little bitch. Proud little warrior is inspiring, in a way. i know, it sounds unlikely, but it’s true. i do not like that dog fighting exists, but i really liked this story.

Prove It All Night

this one is told in a woman’s voice, which is rarely convincing when it comes from a male writer in this genre, Winter’s Bone being one of those exceptions. this is probably my least favorite in the collection, but it’s not a complete clunker. there’s some definite male-fantasy qualities on display here, but also some surprising nuance (surprising because – genre) and i liked the quiet explosion of the ending, even though the story as a whole was a little writing-workshop, structurally.

okay, so this one is like grit lit turned up to eleven. it is almost comically violent, but i mean that as a compliment because i enjoyed the shit out of it. right out of the gate we have a man running away from his grave through the desert, pistol-whipped and bleeding. View Spoiler »we have shovels to the head, meth, shotguns, escape and capture, threats, the aryan brotherhood, murder for hire, an out of control fire, barbed-wire injuries, shooting at enraged bulls, and then the story is like “you still here?? we’re just warming up, so let’s see you take THIS” and it’s jaws shot off and stampedes and a boy’s eyes popping out after getting stomped on by a bull and fucking tumbleweed on fire rolling into folks??? and then it’s “hmmmm, you still on board?? let’s try this!” and it’s a bull on fire falling on a still-living man and a truck’s tires exploding in flame with a man trapped inside – a nazi, naturally, who jumps out of the truck coated in melting and sizzling upholstery and then this line The buckshot made Carter’s head go away. and then riding a crazed burnt-pink bull outta there – lungshot and clinging to a horn while animals flee the inferno and flood the streets like the best nightmare ever: At the bottom of the mountain he came out of the smoke on the back of the bull like something out of a Greek myth, like a man who went down to hell to fetch not his bride but himself. « Hide Spoiler

and i also love that this man spells “teevee” the way i do when i write it out. that gets fifty points.

I Wish They Never Named Him Mad Dog

all good things. the importance of honor even within a system of codified lawlessness, the weary necessary violence of a job done right, posturing bravado vs. professional etiquette, building and maintaining a dubious reputation, a sort of set piece that highlights the distinction between showy gym-muscles and those that come from actual work, where “muscles” in this case is more specifically “badassery.” quiet, true badassery vs. showboatty badassery.

This is not going to end well.

it’s a great piece about a “watchdog;” muscle hired to supervise illicit transactions to make sure everything goes smoothly and without bloodshed. and what happens when a younger man stumbles into a reputation that leads him into our watchdog’s path, unwittingly in over his head and charmed by his own legend.

but he isn’t fooling everyone, and there are some fantastic descriptive passages.

He … got out with a pump shotgun in his hands and that hammer still hanging from his belt. He nodded and swung the shotgun up on his shoulders as he walked our way. I bet the others saw what he wanted them to see, the bad guy making his entrance to the movie. I saw the joy kidlike behind his eyes.

there’s a great build to this one. quiet, brooding, brutal.

this was probably my favorite of the collection. the descriptions in this one are excellent, and the details are vivid and original and it’s more the wire than justified – AKs instead of shotguns, coke instead of meth, black gangs competing for the new york drug trade instead of white skinheads competing for the meth market. and i know – shotgun, 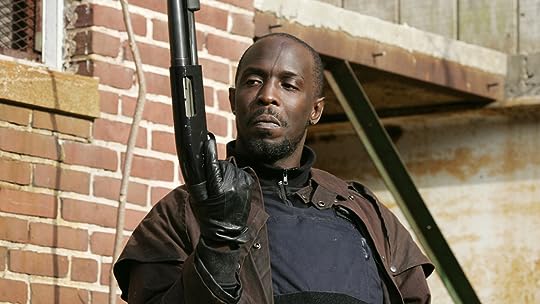 but you take my point.

If you can’t catch Quaco, you catch his shirt.

and this is why they call it “country noir” 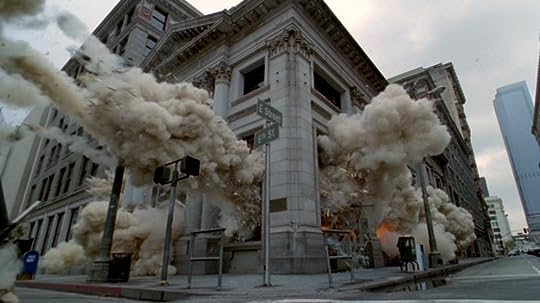 robbing banks is hard!! so very many things can go wrong! and they do, here. i thought this one was very funny, but that reaction made me feel really bad about myself. oops!

speaking of hooks: They meet over the body of a beautiful dead boy

this is another perfect story, and one which broadens the possibilities of the grit lit landscape – takes its themes of drugs, violence and old testament vengeance into a much glitzier world. it’s about a “cleaner;” a man whose job it is to move softly behind the scenes of hollywood’s misbehaving idols – smoothing suicides into unfortunate accidents, clearing away the pills, sweet-talking the bruised victims of celebrity rage. it’s a little peek into a rarified world where misdeeds can be spun and glossed.

There are two kinds of publicists in this world. The kind who get good news out and the kind who keep secrets in. Sarah is the second type.

green and sarah strike up a sort of relationship – meeting occasionally as their workpaths intersect, and it is horribly entertaining to read about the process of their professions.

Sarah nods and looks at the body. The smile goes away again.

“You should get out,” he says. “Of this business.”

“Why?” She bristles, defiant, and Green likes her even more.

“You asked about right and wrong.”

this one has some of the best descriptions of the whole collection. it’s terrifically powerful and it fits the tone of the collection perfectly, despite its setting being so different.

Love and Other Wounds

very short, and very clean. a clever road out of a seemingly impossible situation.

this one you can read here:

this is a little cautionary tale about why we don’t underestimate women. and why con artists who assume BBWs are desperate for affection and are therefore easy targets for romantic manipulation and exploitation should tread lightly.

Ad Hominem Attack, or I Refute This

this story is great. because how many times have you View Spoiler »wanted to punch those insufferably namby pamby philosophy 101 stoner kids in the fucking teeth? there’s no talking to them, there’s no conversation possible. it’s just flap flap flapping as they parrot back their newly-learned vocabulary and juvenile worldviews that normal people outgrew in adolescence. too many bad memories of college parties where i found myself trapped in “conversations” where it was clear that some silly boy thought i was mesmerized and silently awed by their word-labyrinths but i was thinking “just pack that bowl already.” and i know i have cited this scene a billion times before, but this story is totally that scene in Grendel when he’s all emo-moping his pseudo-intellectual existential garbage and beowulf is all “sing of walls, motherfucker! how you like being beaten with your own arm??? why are you hitting yourself??? you still think ‘i alone exist’? because I EXIST, motherfucker! and i will tear you to shreds.*” « Hide Spoiler

and that is why i love this story.

this one has a callback to an anecdote told in Agua Dulce, although the four-year-old boy becomes a six-year-old boy in this story, which tells of the repercussions and aftermath of the anecdote. again – i read an ARC so this will probably be fixed before it pubs, or it might remain as an example of the way stories morph as they become mythos, warnings, the word-of-mouth of the criminal underworld.

the return of the watchdog from I Wish They Never Named Him Mad Dog, showing that he’s still sticking to his code, cool and cautious as ever. he is only a secondary character here, but his presence is necessary and appreciated. i don’t have much to say about this story. it was fine, but not a favorite.

the best laid revenge plans of cuckolds gang aft agley. even if you think you know all the potential pitfalls and take your precautions. fate’s a tricky bitch. woof.

this one, like Love and Other Wounds is also about the kind of clever quickchange lateral thinking that turns the impossible situation into one that, while not ideal, at least gets the job done. but damn, the price is steep. love, vengeance, sacrifice. a great haunting way to end this collection.

i loved this book, and harper also has a full-length novel coming out: she rides shotgun, which i am going to grab with my hands ASAP please.

* may not be an exact quote