this is one of those finger puppet books where you pretend your fingie is a creature having adventures throughout the book, like little penis. 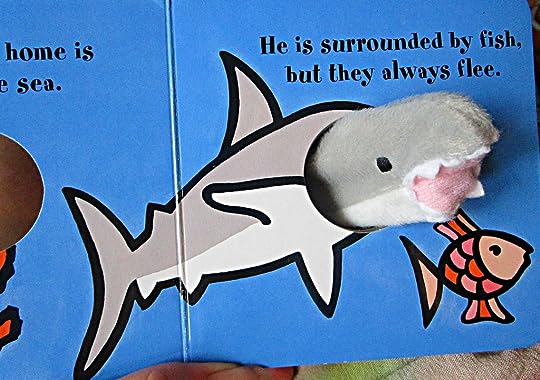 as a fun and formative finger puppet experience for kids, this is probably excellent.

as literature, it is somewhat lacking. not only does it seem to have taken its lessons in rhyme scheme from lang leav:

but this 116-word* book is studded with misinformation and demonstrates either a lack of responsibility or some willful self-deception on the shark’s part.

basically, this is about a lonely shark who wants a friend, but every time he approaches a fish, they swim away. this is the phrasing used:

All Little Shark wants
are a few nice friends,
but when they come near,
he always offends.

now, this makes it sound like he’s making racist jokes, to which fish are particularly sensitive, when in fact, it is much more likely that the offense comes when he TRIES TO EAT THEIR BODIES.

it is interesting to note that in this scenario, the fish approach him before he causes them to “flee,” but i don’t know that the journalism in this book can be trusted, considering that it later references a starfish as being “one of a kind,” which makes no biological sense, and insinuates that starfish are bioluminescent, which is true of very few of them, giving this book the dubious honor of being awarded “laziest research ever” in the finger puppet book category.

i do not think the discovery channel will ever include this on their list of must-read shark books, but there are worse places you could stick your finger this week, so i’ll round it up to four stars cats.