so, yeah—bardugo is three for three in these tor shorts.

i have always loved fairy tales, since i was a little sprout, and the darker they were, the better i liked them. and when i discovered, as a slightly larger seedling, the phenomenon of taking fairytales and retelling or modernizing them, it was a wonderful thing indeed, because the authors retained the spirit of the original works, but made them slightly less didactic and simplistic and therefore a little more ambiguous. they tended to be less facile in their moral distinctions, which was more appealing to me, because it seemed truer and more sophisticated; they demanded more from the reader in processing the stories.

bardugo kicks ass at this.

this one has the shape and all the elements of a classic, traditional fairy tale. the daughter of the duke, whose beauty was beyond reckoning:

There is some debate over what Yeva Luchova actually looked like, whether her hair was burnished gold or lustrous black, whether her eyes were blue as sapphires or green as new grass. It is not the particulars of her beauty but the power of it that concerns us, and we need only know that Yeva was lovely from the moment of her birth.

She was so beautiful, in fact, that the midwife attending her mother snatched up the wailing infant and locked herself in a linen closet, begging for just another moment to gaze upon Yeva’s face and refusing to relinquish the baby until the Duke called for an axe to break down the door. The Duke had the midwife whipped, but that didn’t stop several of Yeva’s nursemaids from trying to steal the child away. Finally, her father hired a blind old woman to care for his daughter, and there was peace in his home. Of course, that peace did not last, for Yeva only grew more beautiful as she aged.

and her beauty also becomes more dangerous as she ages. she is drugged and (temporarily) kidnapped by an artist smitten with her, men fight to the death for the honor of becoming her suitor, and

When Yeva stopped to remove a stone from her shoe and unwittingly gave the crowd a glimpse of her perfect ankle, a riot broke out, and her father decided she must be confined to the palace.

also true to the genre is the strategic manipulation on the part of her father in the arrangement of her marriage when yeva comes of age. like all good fairytales, the duke sets out three increasingly-difficult challenges for her prospective suitors, making sure he will personally benefit from the end-products of these challenges, and also arranging it so the prince has the advantage over all other suitors. yeva questions her father’s every decision, understanding that arbitrary contests are no way to determine the worth of a man, or his suitability as a life-partner, but not understanding the extent of her father’s greed or that her unconditional love for her father is not reciprocated, because a daughter is a commodity, and only as valuable as the highest bidder for her hand.

but there’s aways a dark horse.

and this is where bardugo really shines. she continues to structure the story pretty closely to the expectations of the fairy tale genre: unlikely candidate for the hand of the lovely young thing, magical/supernatural assistance, challenges handily won by the underdog, but then she subverts these expectations with a blammo ending that gives yeva the agency so few female characters in fairytales ever enjoy.

i have loved all three of these stories, and i just bought the last book in her trilogy, which i will be marathoning as soon as i possibly can. if they are anything like this, i am going to melt into the happiest reader-puddle ever. 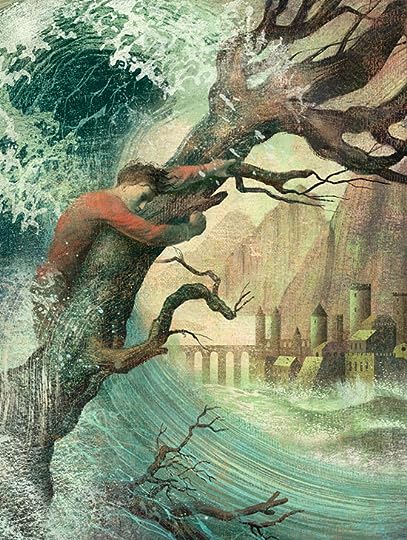