Is Somebody There? by Natsuhiko Kyogoku
My rating: 5/5 cats 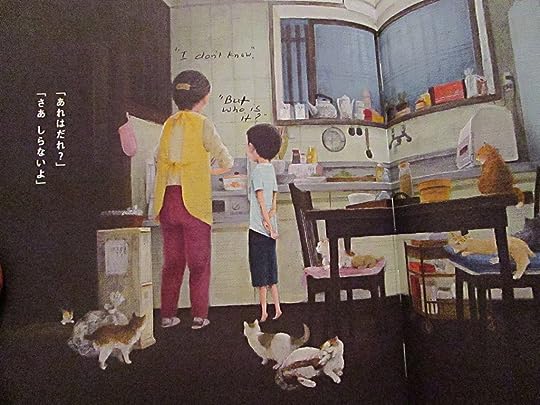 okay, you know how i am always saying stuff along the lines of “oh, it is so hard to be me and not be able to find a book that scares me, ohhh i am just too tough!”

well, this 15-page japanese children’s picture book (another wonderful thoughtful gift from brian and chizuru), gave me CHILLS! i didn’t lose any sleep or anything, but i definitely felt disturbed and creeped out, which is more than a book’s been able to do to me since i can even remember. so—kudos to Natsuhiko Kyogoku and kudos to brian’s translations for getting that job done.

this book is not only spooky, it’s also beautiful. brian points out that the illustrations are done in oils, and you can actually see the texture of the canvas in them, which is way cool. little blue’s pictures are doing no justice to how spectacular the artwork is in this book, but he’s doing his best. 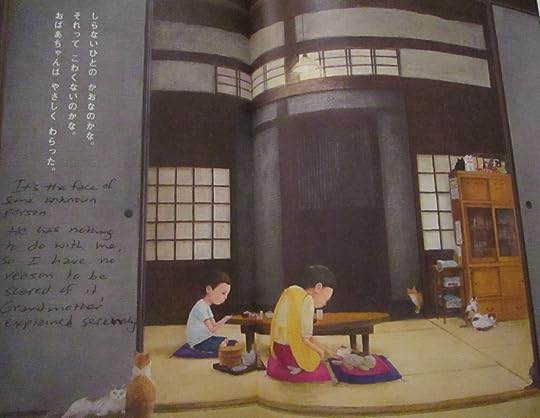 i’m going to go into a ton of detail about the plot of this book, and all the things it could meeeeean, both my thoughts and those of brian. if you’re wary of having a japanese children’s book with no english translation available spoiled for you, take this opportunity to go on your merry way ‘cuz i’m about to dissect this thing like mad.

so, a basic overview before i get all granular with interpretation and picking-apart.

if brian’s translations are to be believed, and i trust him implicitly, this story is about a little boy who is sent to live with his grandmother, in a house which has more cats than can even be counted. which is not a plot point, but it should be, because there are cats EVERYWHERE here. just when you think you’ve seen all the cats on a page, you notice another one lurking in the shadows. 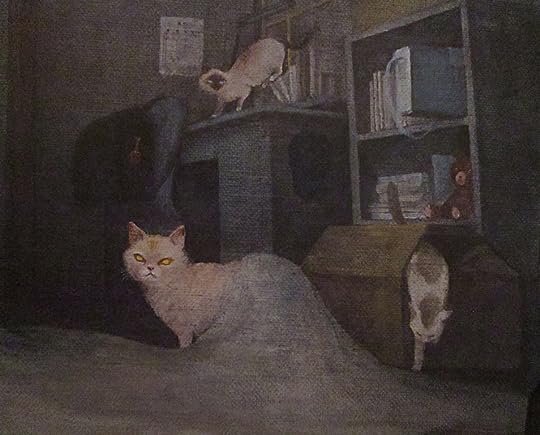 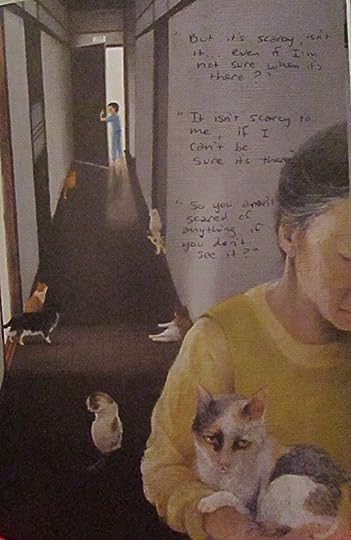 okay, right, sorry—i was distracted by all the cats

AAAAHHH—why are you so many!

okay so ANYWAY—he goes to live with her and while he’s there, he notices something utterly terrifying—a man’s face peering at him from the very, very high ceiling.

so, naturally, he’s terrified, and he runs to his grandmother to tell her, and she’s totally unfazed by it, and she’s all “yeah, i’ve seen that before. i just ignore it, though, and it’s fine.”

WHICH IS A TERRIBLE LESSON TO TEACH CHILDREN!

danger doesn’t just disappear if you ignore it. no one has ever not been eaten by a monster by hiding under their sheets. 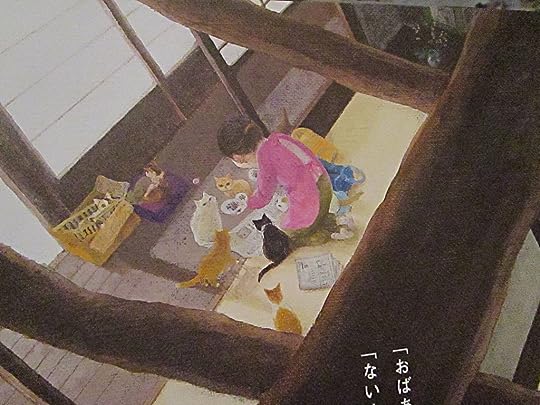 it is clearly from the scaryman’s POV, but it’s just dropped in the middle of the story without calling attention to it, like “doodley-doo, don’t mind me—just looking at you from the ceiling, carry on”

even seemingly-innocuous scenes are made creepish by little details, like the gloves in this one, taking over the foreground and looking like disembodied hands: 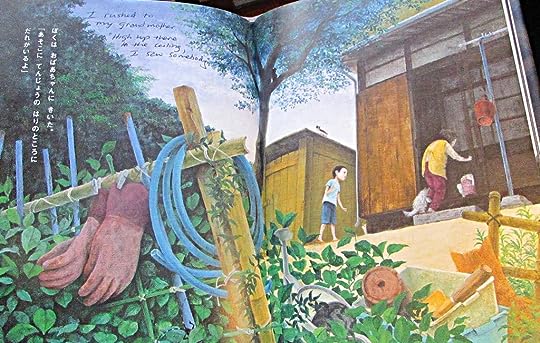 there are only four cats in this picture. you can either squint or trust my math.

why is this book so scary? if we were to outline the story, nothing much actually happens. the first six pages are entirely taken up with establishing atmosphere; ordinary, but slightly creepy: the house is old and dark, the ceilings are high, etc.

in fact, since there’s no english translation, and i really need to share this thing with others, i’m going to type out all of brian’s translations, to make it easier for me to really demonstrate how chilling this book is.

the title translates to—Is It Really There, or Isn’t It?

It was decided I was to live with my grandmother. She lives in a very old house.

Everything about it is old. The walls, the rice-paper windows, the straw tatami mats…

The ceilings are very high and very dark places.

Far too high for even the tallest adult to reach without a ladder.

“That goes up pretty high, doesn’t it?”

“Yes, very high indeed…Far too high to be reached.”

Even straining my eyes, it’s hard to see anything up there. There’s only a tiny, little window way, way up there, which barely lets in any light. It’s a blackness over us.

“Indeed it is. Very little light comes in.”

Down below, where we are, it is much brighter (because) we have an electric light.

“Grandma, have you ever gone up there?”

One day, I happened to peer up into the blackness above and…

Within that oppressive darkness, high up on the wall I could suddenly make out the face of a man. A terrible, evil, angry face.

I rushed to my grandmother.

“High up there in the ceiling, I saw somebody.”

Grandma refused to look up.

“You saw it too? Well I guess that means it’s real.”

It’s the face of some unknown person. He has nothing to do with me, so I have no reason to be scared of it,” Grandmother explained serenely.

“So you aren’t scared of anything if you don’t see it?”

“Nope, because it’s so high, not seeing it is the same to me as if it wasn’t there at all.”

But I can’t help it. I have to look. And because I look, I am terrified.

Because the face IS ALWAYS there.

i mean—come ON! if that isn’t as skin-crawling as The Tailypo: A Ghost Story, i don’t know what is. that maddening repetition, those empty conversations with a woman so emotionally detached that it feels like talking to an echo, the instructions to ignore a threat that has breached the safety of one’s home—it is such effective domestic horror. and so ambiguous! because what the what is even going ON here? is there really a face in the ceiling or is the grandmother just misguidedly indulging his imagination? and if it IS there, what does that mean? has the grandmother lived with this…thing all these years unharmed? or is it responsible for that air of drugged complacency she’s giving off. has it been preying on her until she’s just a shell? is she setting her grandson up for a similar fate? oh shit—does she have toxoplasmosis from all those cats? that’s…that actually makes sense. i think that’s the interpretation i’m going to run with, because it does explain everything—her blasé response to what is clearly a threat, the cats parading across every page like evidence at a crime scene waiting for detective karen to close the case. EUREKA, MOFO!

so there, i have, in writing this review, come up with an answer that totally satisfies me. good day.

brian had some other thoughts that were compelling, which i was going to share, but i just now realized he is no longer on goodreads. what the hell? so i don’t feel comfortable posting anything without his permission, and i’m feeling like a dick for not noticing his departure when it happened. guess i’m off to write a real letter and mail it overseas and hope he’s not mad at me, because i really am grateful for this book and all the others and i hate being the distracted loopy person i have become who doesn’t even notice when people are gone. i am as horrible as a face that lives in your rafters. and with a mirror-ceilinged elevator, i can actually be just that: 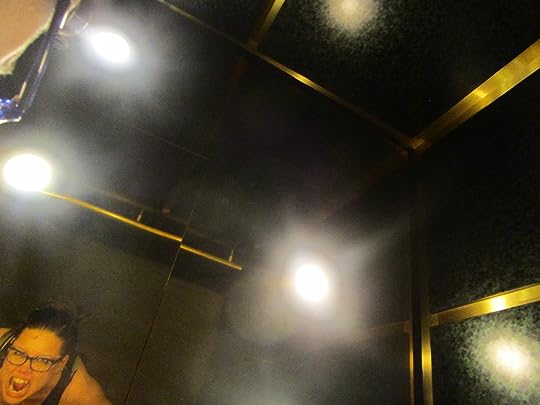 but if you want to see the “real” face from the book, here: 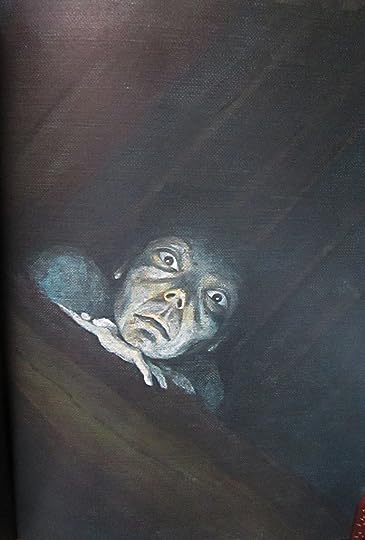 you decide which would be worse to see every day.