okay, i almost can’t believe i’m about to spend time reviewing this book with the same sincere and thoughtful consideration as i give any other book because

but i am what i am, so here i go, giving this trashy media tie-in book my undivided attention and whatever critical faculties i got left after months of isolation, smashing you sweet pearls with my swine. 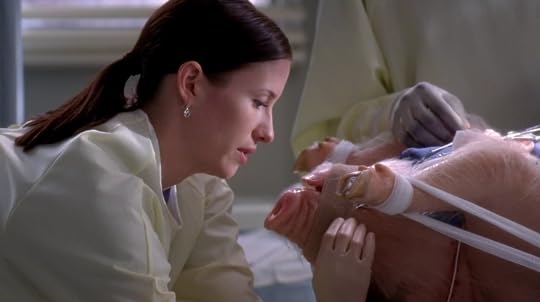 PERSONAL BACKSTORY: i only started watching grey’s anatomy a couple of years ago, when i was prowling netflix looking for something to background binge while i did other stuff. i’d never been drawn to it before, because i’d already watched ER and thought surely that was the definitive medical drama, but—since i’d already vacationed in shondaland with Scandal AND How to Get Away with Murder, i figured why not see what all the fuss was about, suspend my disbelief that the dude from Can’t Buy Me Love was believable as a sex symbol, and maybe get to see some cool-gross medical mishaps. 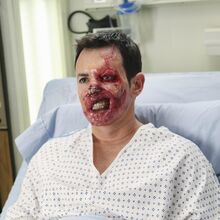 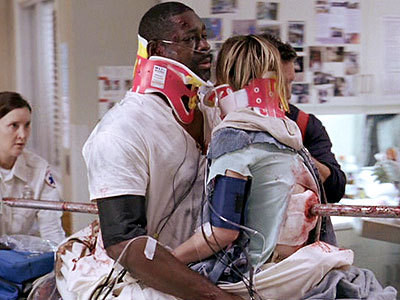 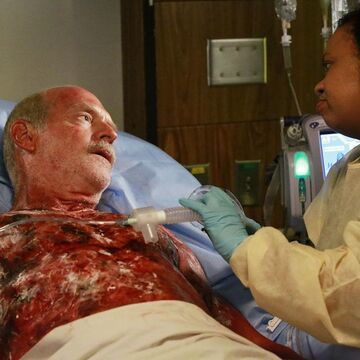 here’s the thing about grey’s anatomy—it is not a fantastic show, but it is powerfully addictive. i know this because i binged the 14 network-length seasons available on netflix at the time in well under a month. sean of the house made fun of me for watching it, caught a couple of episodes, and then he began watching it on his own, starting at the beginning and actually getting ahead of me at one point. greg ALSO made fun of me for watching it, before giving in and he not only burned through all the episodes available on netflix (15 seasons by that point), but he began having dreams about the show every single night and feeling bereft when he ran out of episodes.

season 16 just dropped on netflix, and he’s so relieved.

it gets its hooks in you, even though there’s so much about it that’s an eyeroller’s paradise. it’s teevee popcorn, and while it’s not as satisfying now as it was when it was fresh and hot (to me), there’s something comforting about it even when it’s stale and terrible.

so. greg got me this book for my birthday.

it takes place during seasons 1 and 2 of grey’s anatomy, but reading it feels more like the experience of watching the past 4-or-so seasons: it’s not great but you do it anyway. 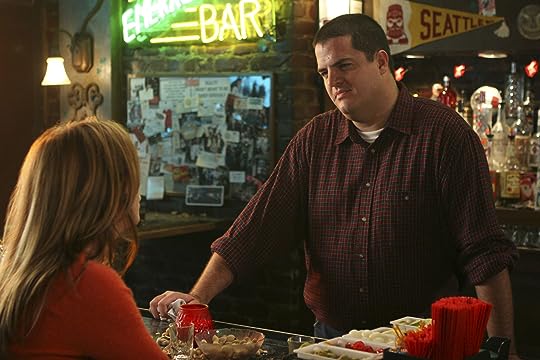 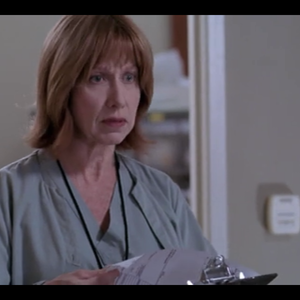 who—we are to believe—spend their downtime blogging gossipy tidbits about the staff of seattle grace hospital AND gossiping with each other in daily IM sessions about the very same topic.

both joe and nurse debbie get their own half of the book (in a read-half, flip-upside-down, read-other-character’s-half format), and each half alternates between their respective blog posts and joint IM convos, mostly just regurgitating the highlights of the season’s goings-on, but fleshing it out a little. a very little. if you’re reading this book to discover seeeeecrets and easter eggs and deleted scenes, like the mystery of cristina’s missing shoe

it’s not gonna give you much of that.

it’s fluff, but it’s not painful to read, despite some things that bugged me because i don’t know how to turn off the part of me that thinks even junk food books should be given a cursory edit before sending it off into the world (although i see now that this is a FIRST EDITION—thanks, greg!—and maybe any errors were corrected in subsequent printings, of which i am sure there were MANY because who wouldn’t want this book?)

because although i appreciate the editorial challenges of structuring a book like this, (tho’ probably not as challenging as editing the new kimmy schmidt interactive movie, which you should go watch now because connor is in it!), there are some continuity issues and timeline gaffes. there are occasions where someone will mention something in the blog part (say, debbie talking about meredith and mcdreamy co-owning a dog) and then seven pages (and four blog posts) later in her IM-with-joe part, debbie becomes outraged that he kept from her this oh-so-juicy gossip about meredith and mcdreamy co-owning a dog.

debbie will casually refer to what happens to men when they explode as “pink-mystifying.” which, while the callousness and neologizing are on brand for the show, i do not think it would be spelled with a y.

there are sentences like this, in one of joe’s MANY blog posts about karev:

Thanks to him, the entire hospital now knows exactly what’s underneath Izzie’s pretty blue scrubs.

someone needs to come along with a 10 blade and remove that malignant modifier! izzie may be pretty

what’s underneath her blue scrubs may be pretty

but the scrubs themselves? 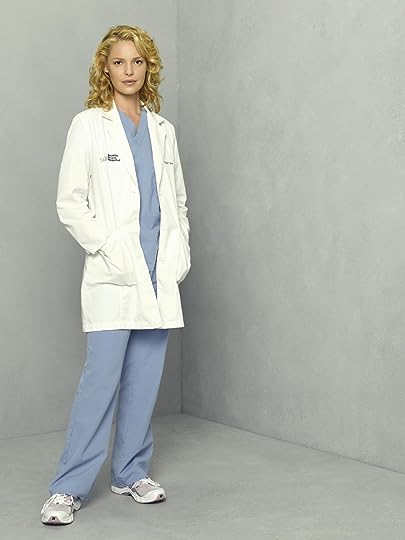 eh, not my type

oh, those aren’t big deals, you say? i am a nitpicking grammar monster who doesn’t even know how to use capital letters, you say? what about the fact that dr. derek “mcdreamy” shepherd is referred to, MORE THAN ONCE as “mcsteamy.”

and there is a mcsteamy

and you do NOT mix them up. although, and i’m just realizing this now, this was written in 2006, and i’m not a big enough grey’s geek to remember the first instance of sloan being referred to as “mcsteamy,” but considering he is only in one episode in seasons 1-2 (which i just googled, that wasn’t bone-deep grey’s knowledge), and even though he IS in this book, it is likely this book predates that appellation and maybe the show grabbed it from the book?, and i don’t know what to do with this knowledge, because it sure as shit won’t impress anyone at a cocktail party. not that cocktail parties will ever exist again in this covid-riddled world of ours.

WHICH GREY’S ANATOMIST WILL SAVE US FROM THE ‘RONA??

last complaint: one of the more annoying trademarks of grey’s is the pitterpatter nonsense cadence of roughly 70% of the characters’ speech patterns, part of which is driven by the need to give everyone from co-workers to love interests to patients some sort of cutesy nickname: evil spawn, mcWORDOFYOURCHOICE, really old guy, heart in the elevator guy, cardio god, the plastics posse, etc etc.

oh! which phenomenon is apparently something the internet-gang has been memeing for the entire run of the show and i am too late to this fandom to have noticed, but here, internet supplies a multitude of grids showcasing an assortment of primary and secondary nicknames, so here are a couple: 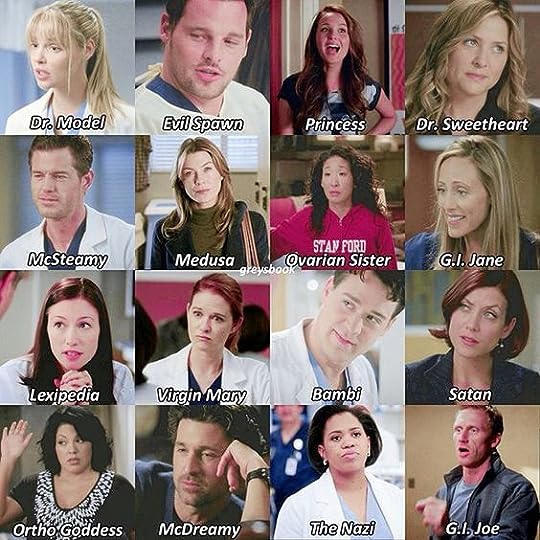 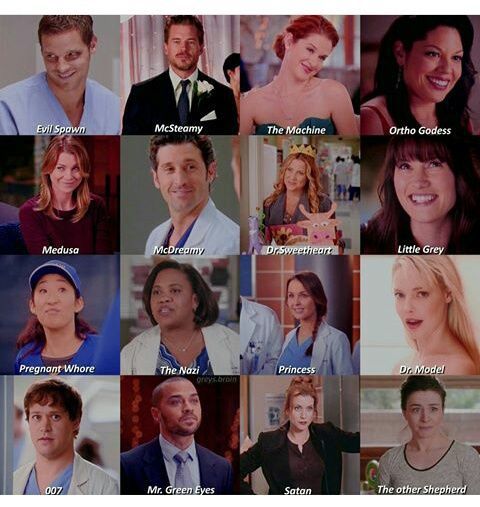 all of which i am posting for the excuse of posting THIS ONE which cracked me up because burke: 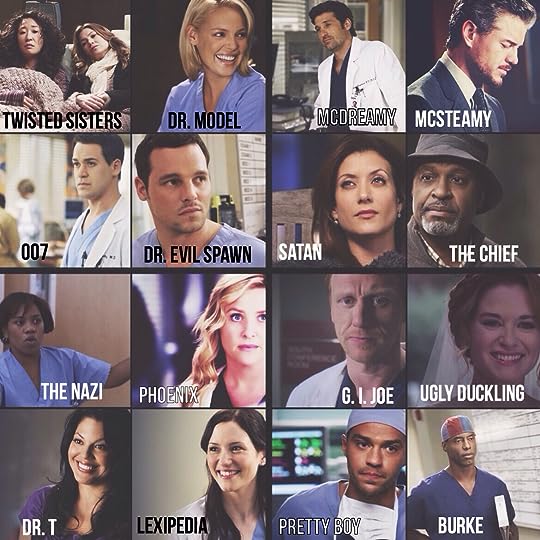 hahaha no nickname for you, mcboring!

i will say that one of the only good things on this past season was koracick referring to owen as “strawberry shortcake,” which caused me to guffaw and the last time i laughed during a grey’s episode was at this:

BUT, while it is an across-the-board trend, (and the shoulders-back, chin-up rapid-fire speechifying is a shondaland tee em) the cutesy repetitive nicknamey cadence isn’t something i remember joe ever doing on the show. he was the calm and reason in the storm 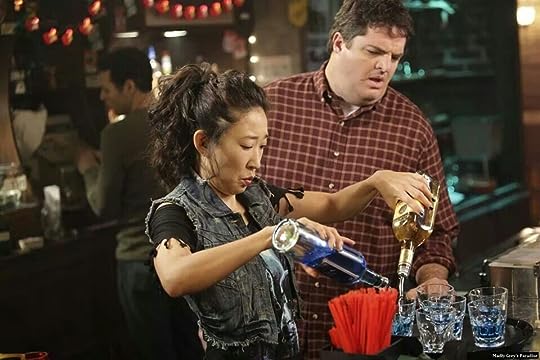 but his voice in this book is grating and sounds much more like a breathless izzy-george word-dump, punctuated ONE MILLION TIMES with grey’s most overused word. 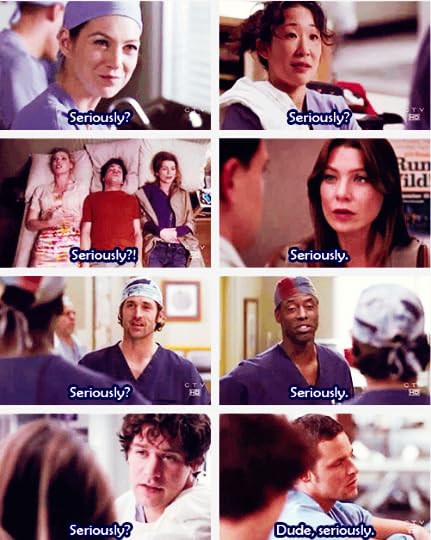 for example, here is joe’s blog account of meeting a new patron, who he immediately nicknames Crazy Psycho Dude. for those of you watching along, this meeting would have taken place in season 2, at the very end of ep. 25 (17 Seconds), while the character would actually appear in ep. 26 (Deterioration of the Fight or Flight Response).

It was then when I let my imagination run wild. I’m telling you, all I could think about was the idea that this guy could very well be the kind of guy who keeps women in a man-made well in his basement and says things like, “It rubs the lotion on its skin before it gets the hose again.” Seriously? Seriously.

The possibility that Psycho Crazy Dude could actually be psycho and crazy began to dawn on me. Now, I knew I had been lucky enough to survive a standstill operation. But what if I didn’t have any luck left? What if I ended up in the well? What if I ended up having to rub lotion on my skin? What if it was me, Joe the Bartender, about to get the hose again?

elephant in the room, YES, joe is misquoting the silence of the lambs and we are all deeply disappoint. but we are also deeply skeptical that joe would say any of that, or much of the other stuff attributed to him in this book.

i have spent so much time reviewing this book and i’m sure no one’s even reading to this point oh my god my decisions are BAD.

anyway, to say some nice things about the book, i love that joe’s section includes recipes for character-specific cocktails, like Meredith’s One-Night Stand and Bloodhound Yang.

i also love that bokhee gets a mention in here (even though they misspell her name as “boki”); a character often-addressed, rarely-seen-sans-mask, my personal posterchild for our times. 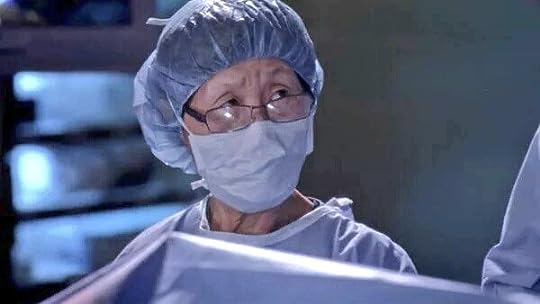