that’s an efficient summary of the book, but if you want to make a stew out of it, add that nietzsche/abyss quote, some lovecraftian themes and adjectives, and SO many birds—specifically DEATH BIRDS:

“Don’t you know the stories? Death birds are said to guide the souls of fallen climbers out of this world. If you believe what the old guides and mountain folk say, at least.”

He smiles. “Did you know mountain rescuers often find fallen climbers without their eyes? By the time they find the bodies, the birds have already gotten to them. Ravens, jackdaws, crows; they pick out the eyes and swallow them up.”

“Ask one of those guides. They say the birds do it so the soul is free to escape. Otherwise it’s doomed to stay and haunt the place it was found in. But sometimes the soul doesn’t want to leave and it lingers inside the bird for a while. They say that if you listen, you can hear their screams coming from the mountains at night.”

and now i have a new fear.

i am someone who loves horror novels that smoosh supernatural elements into the dangers of nature, because even without the things that go bump in the night, the natural world’ll always find a way to rock-block the hubris of humans trying to cram themselves into nature’s most intimate parts without consent—digging further, diving deeper, climbing higher, and nature has a very specific way of expressing that no means NO:

Every year, climbers—sometimes entire teams—disappear into deep glacial voids and die in their frozen darkness. If the mountain is merciful, the drop is deep enough to smash them into silence in one go. Most victims, however, are trapped between blue, narrowing walls of ice, and as their body warmth melts the ice, they sink slowly deeper and deeper, until they die very consciously of asphyxiation.

and now i have two new fears.

Echo is about a man named sam whose experienced-mountaineer boyfriend nick sets out with his even-more experienced companion augustin on an alps-scaling jaunt and comes back alone—physically, psychologically, and biologically changed. nick’s former golden-boy beauty has been ravaged; the lower half of his face swathed in a mummy’s worth of bandages holding what’s left of his face in, but his personality, his aura has also been altered—he’s brought back unspeakable horrors from the aptly-named Maudit; a stuff-of-legend tardis of a mountain where ancient forces scoff at human stuff like scale and logic and geometry, and are now clinging to him like psyche-rooted parasites, affecting everyone who comes into contact with him and unleashing The Morose on the valley below, along with—as i have mentioned—so many birds.

although at first sam is repulsed by nick’s spooky new characteristics, love conquers all, and he finds that new-nick is not without a certain dark intoxicating quality—the allure of vertigo that the french call l’appel du vide (the call of the void), the yawning-abyss dizziness kierkegaard described as “the dizziness of freedom,” the same that inspired an italian songwriter to declare: la vertigine non é paura di cadere, ma voglia di volare (vertigo isn’t the fear of falling, it’s the desire to fly).

none of those references are specifically in the text, although this book is absolutely a polyglot’s delight, riddled with often-untranslated bibbits of evocative phrasings that forced me to dust off my slumbering frenchiness.

the shape is a multi-POV, time-slippy narrative, mostly linear but pockmarked with holes, where the structure contributes to the reader’s discomfort—you kind of always feel like you’re walking in mid-conversation, the missing plot-points feel like missing time after a seizure or fainting spell and it’s all wonderfully eerie and uncomfortable.

it’s a surreal and suggestive kind of book, and although i’m not usually a fan of this kind of incomprehensible, unfathomable, joseph-and-the-coat-of-many-cosmic-horror-descriptors style of horror, i was surprised and thrilled to find myself completely creeped out several times, which is a rare occurrence for me. that whole opening bit with the blink-encroaching wraiths:

The people in the stairwell are still there.
They’re closer now.

as well as the thing that happens to the boy on the operating table and the smile nick draws on his bandages:

He turned to look at me, and, man, chills up and down my spine. On the bandage strips, where his mouth shoulda been, he’d Sharpied a smiley mouth. A black, half-moon curve, crossed at the edges for round Cupid cheeks. Coulda been innocuous, but wasn’t. Cuz his head was moving and the smiley wasn’t, giving his face the grisliness of a puppet come to life.

But the top half was real, and that was Nick. He made a muffled sound, looked happy to see me.

He typed on his iPad:

This way you’ll always know it’s me and never mistake me for someone else. When I smile, you don’t have to be scared of me, okay?

I couldn’t tell if he was joking or not. I smiled to be on the safe side and said, “I’m not scared of you.”

his fear is entirely justified, as was mine soon afterwards:

When I looked up, I saw him slowly swing his right arm and put his hand on his Sharpied smiley mouth.

and the cold, i mean THE COLD, it’s a monster all on its own:

I hadn’t even gotten halfway to the village before I wish I’d stayed home. The valley was on the verge of a panic attack. The mountains seemed to have been disjointed. The sky rocked. The cold unhinged. There are November mornings when the cold is clear, crackling, and crisp, but this cold was sticky, syrupy, clung to you. Like it was begging you for help. You, the first organism to have crossed its path, and would you please take it with you and protect it from what’s about to happen, because that was much, much worse than the cold itself.

Jesus. The Morose hadn’t even got started yet and my metaphors were already going haywire.

the day i finished this book, winter finally dumped a bunch of snow on us, and since i can now participate in the instagram-experience even though i still stubbornly refuse to own a pocket-phone, i foolishly decided to photograph this book out in the blizzard i had to brave on my way to work. i posed it here and there, trying to find the perfect alps-looking background, whilst being buffeted by the wind, waist-deep in a snowdrift, and by the time i had taken way too many very average shots, my fingers were completely numb and i had to stop off at connor’s so he could wrap my hands in a hairdryer-warmed scarf until i could feel them again and i have never felt such pain as the thawing of my fingies. needless to say, i was late to work, but once i was finally on the subway, i came across this passage and it made me laugh ever-so-ruefully:

I stick my frozen hands under my Gore-Tex coat and in my armpits. The burning pain that takes over my fingers as the blood flows back into them pushes all my thoughts out of my head and I have to scream.

all of that, and this is what i got: 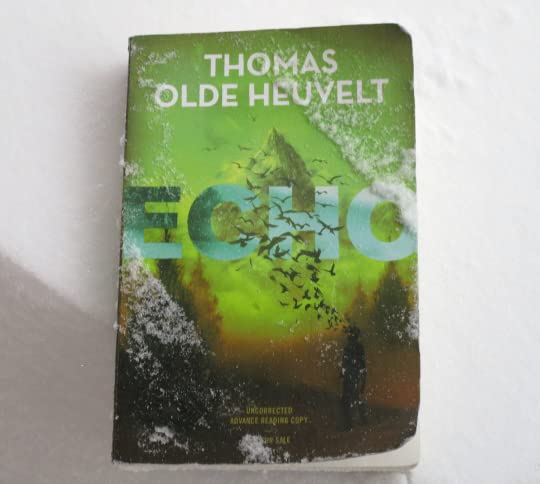 anyway, this book is spooky and i liked it very much.
that is my review. i did my best.

i am very grateful to tor/nightfire for sending me this ARC, and for caring about my safety enough to also send along a handy first-aid kit to protect me from life’s quotidian scrapes, even though it would in no way protect me from the dangers of LE MAUDIT. 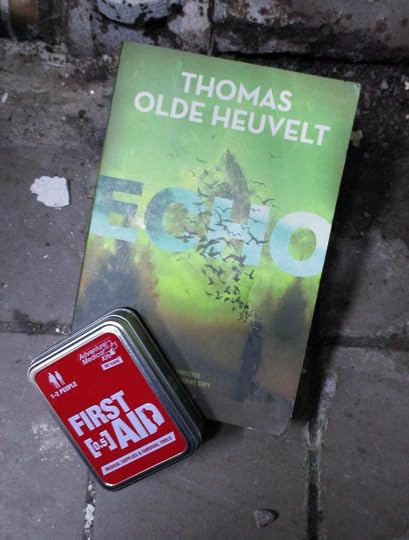