how rude am i? 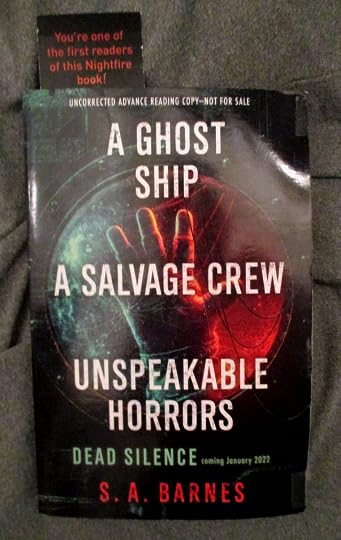 i got an ARC of this book back in august 2021, put off reading it until spooktober 2021, and even though i was so excited to be, as this bookmark declares, one of the first readers of this book, and even though the pub date got moved a whole month back, here i sit on delayed-pub-date-eve and i still haven’t reviewed it.

i am the worst.

the worst thing about being the worst is that i LOVED this book, despite my lack of interest in outer space stuff that doesn’t involve murderbot, and now i’m worried i’m not going to write a very good review for it because i waited too long and my brain is tired and i’m terrible at everything these days.

this book deserves so much more than me.

but you deserve this book—whether or not you’re into outer space stuff. it’s a mishmash of sci fi, horror, mystery, psychological suspense, and even some romance, which sounds genre-greedy, but manages to work, somehow.

it’s a whizz-bang adventure story about a beacon-repair crew on the tail-end of their final mission, after which machines will take over the work from humans like some futuristic version of the industrial revolution. team leader claire kovalik, our unreliable narrator with a tragic backstory, is not looking forward to this transition at all, so when the opportunity to prolong the mission presents itself, she digs in despite the protestations of some of the members of her crew.

to be fair, it’s a pretty exciting opportunity: the discovery of The Aurora; a luxury spacecraft that went missing on its maiden voyage twenty years ago carrying hundreds of passengers—the rich, the famous, and the infamous—whose disappearance became the stuff of legend, speculation, a bermuda-triangle-grade mysteeeeerious phenomenon, and here it is—the chance to make history, solve the mystery, or—for the less noble crew members—fill their pockets with bling.

and what harm could there be in boarding a ship that, despite being top of the line in every way, abruptly and inexplicably went dark and has been floating through places unknown full of whatever’s left of whatever fate its passengers met, undisturbed and unprovoked for decades?

as it turns out, SO MUCH HARM!! SO MANY HARMS!!! A MANYLAYERED HEAP OF HARMS!

it’s a locked-room mystery set in a haunted house in outer space, and it’s intense, wonderful, surprising, disorienting—there are so many different levels of unreliability to this thing and it is an absolute thrill trying to excavate the truth from claire’s slippery heap of memories distorted by hallucination, damage, amnesia, lies, self-preservation, and trauma, and even though i waited a long time to sing its praises, i am singing them as loudly as i can to make up for it.

‘cuz dead silence is the loudest silence of all.