this book is straight-up bonkers. seeing this was set “at an elite new england university” with an exclusive clique at its center and seeing it compared to Heathers, i went into it expecting a Megan Abbott-y/The Secret History-y type of deal; full of those dark and toxic currents that define adolescent girlhood, where affection shifts into power struggle at the drop of a hat, but also featuring a bunch of soulless smarty-pants big on ritualistic gatherings and down for some light murder.

this… is not that. which is not to say it’s bad AT ALL, it’s just not what i thought i was getting into. it is ALSO not, although this is frequently true of other books, that it is being misrepresented by overzealous marketing. you see, it is also compared to The Vegetarian, which i have not read, but now that i’ve looked into that book more, if i HAD read it, i probably would have been less taken aback by what this book actually is.

which is, as previously stated, bonkers.

this is The Secret History through the looking glass, carroll’s white rabbit split into four excessively co-dependent MFA students; twitchy and touchy-feely and calling each other “bunny,” operating symbiotically(?) as a “we;” each maintaining a specifically regimented style of expression in appearance and craft, but otherwise inseparable.

samantha, our narrator and entry into this world, is the fifth person in the workshop, on the awkward periphery of these cooing girls who always seem to be monkey-grooming one another and giggling and sparkling all over the place. unlike the bunnies, who are rich and well-assimilated in the jargony twaddle of MFA programs the world over (”I appreciate the uncertainty the piece gestures toward…I just think she could go further into the dream space. It’s so interesting how she performs and reenacts trauma.”), samantha is planted firmly in outsider territory; a scholarship student whose darker themes are called ‘angry,’ ‘mean,’ and ‘distant’ by the bunnies, from whom she seems content to maintain her distance; aloof and sarcastically eviscerating them from afar alongside her art school dropout bestie ava; she of the fishnet gloves and veil, the asymmetrical haircut and tattered underwear-as-outerwear look.

and then, unexpectedly, samantha is formally, by way of origami swan, invited into the bunnies’ inner circle, where she learns an awful lot about creativity, process, vulnerability, and true power.

so yeah, it’s VERY reminiscent of Heathers, with its interplay of the frivolous and the dark and the comedic, as well as individual and group dynamics, 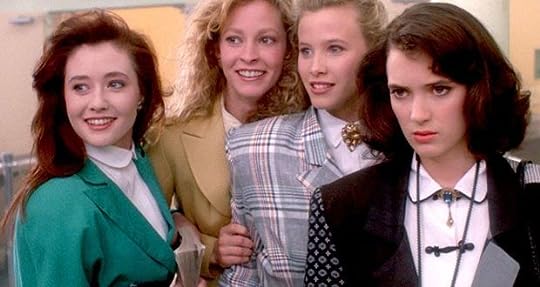 but it’s just as much molly ringwald and annie potts in Pretty in Pink; outsider snark as a weapon against the allure of the wealthy pretty people, and the spiritual cost of capitulation (which john hughes never addressed, but i always inferred), 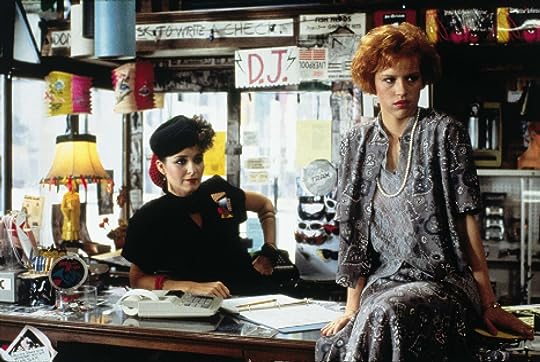 and a vision board collage of style and theme that’s like Desperately Seeking Susan and Pump Up the Volume and Heathers and 92% of john hughes’ oeuvre. and also, oddly, the spice girls, since the bunnies adopt a particular quirky fashion-based persona that sets them apart within their collective persona.

it’s not bonkers right out of the gate. at first, it seems like it’s gonna be a fun-poking campus novel. this book is so funny in its depiction of the MFA world; the fetishizations and the relentless cleverness and posturing and critiques, which i can only imagine is much worse now as millennials tiptoe thru the triggers trying to make art that offends no one and supplying feedback that is nothing but praise, even for the kind of self-consciously manufactured glop people like the bunnies produce. like the one samantha calls “the Duchess,” who writes “inaccessible and cryptic” pieces, she calls proems, “etched on panes of glass using a dagger-shaped diamond she wears around her neck.” or the work of the one samantha has dubbed “Vignette,” who shares “a series of unpunctuated vignettes about a woman named Z who pukes up soup while thinking nihilistic thoughts, then has anal sex in a trailer,” for whom samantha has little patience.

I hate Vignette’s pieces. They are dreary word puzzles I’m always too bored and annoyed to solve. Each paragraph is a half smile, half frown, way up its own asshole. Also, they beg questions like: when on her perilous, pirouetting journey from Interlochen to Barnard was she ever in a trailer?

but, of course, in a workshop of four hydra-like girls and a fawning mentor, an outsider does not have the luxury of honestly speaking her mind.

”What do you think, Samantha?” Fosco asks me.

That it’s a piece of pretentious shit. That is says nothing, gives nothing. That I don’t understand it, that probably no one does and no one ever will. That not being understood is a privilege I can’t afford. That I can’t believe this woman got paid to come here. That I think she should apologize to trees. Spend a whole day on her knees in the forest, looking up at the trembling aspens and oaks and whatever other trees paper is made of with tears in her languid eyes and say, I’m fucking sorry. I’m sorry that I think I’m so goddamned interesting when it is clear that I am not interesting. Here’s what I am: I’m a boring tree murderess.

But I look at Vignette, at Creepy Doll, at Cupcake, the Duchess. All of them staring at me now with shy smiles.

“I think I’d like to see more of the soup too,” I hear myself say.

samantha herself is not immune to that stereotypically, overly fussy brand of MFA writing, even though we don’t get to see much of the work she produces for the workshop. however, as the narrator, everything is filtered through her descriptions, and the prose is precise, overly crafted; the reader is bludgeoned with adjectives, with a particular emphasis on smells pinned into place with poetic words, where the bunnies’ outfits are described in every scene, creating a sensory overload that is frequently original and poetic, but is sometimes just… too much. don’t get me wrong, i loved most of the writing,

She shivers at the view of the grand trees, as if they’re not trees at all but something truly vile, like all the rosy-blond light that seems to forever bathe the campus is about to punch her in the face like a terrible fist of rich.

there’s just a lot of chewy prose here and sometimes it’s a description-bog.

and then… bonkers ensues.

it’s really fun and sharp and shivery, with a macabre fairy-tale overlay that gives it a unique spin on the coming-of-age tale. “coming-of-age” might seem misplaced, considering these are MFA students, but they read much younger than their actual age; not just the self-consciously girly-girl bunnies, but also in the themes samantha brings to the narrative; her awkwardness and loneliness and leftover-adolescent self-consciousness about fitting in; finding her place — for all of her ostensible disgust at the bunnies, their camaraderie is not without appeal for someone defined by loneliness and survival-mode embracing of their own otherness.

it may not have been the book i thought i was going to read, but it was a very pleasant surprise, and even though i am being intentionally vague about where this one’ll take you, i encourage you to find out for yourself, because bonkers is way better than boring. 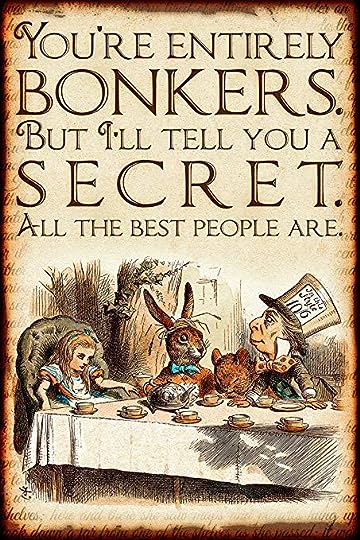 that was… unexpected. i need to process this one a little bit. review TK.