it does involve a murder on a campus, a professor character, and a yearning by characters outside the moneyed class to fit in and rub shoulders with those who have wealth and power. 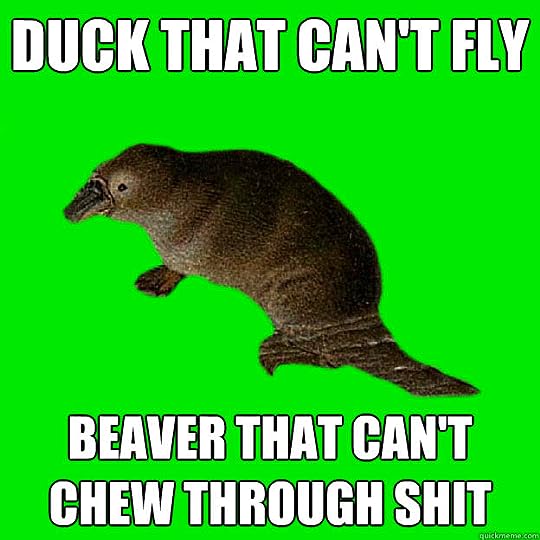 it’s a decent book, but like the platypus, it’s not sure what it’s meant to be. it’s bound to lose the mystery audience when it fails to deliver the momentum and pacing of a mystery, View Spoiler »and when it bails on the resolution « Hide Spoiler. unfortunately, that’s one of the few genres where having a number of central characters who are all unlikeable isn’t a detriment to the story. unlikeable characters are in no way a dealbreaker for me, but i think for people not going into this for a mystery novel, but as a regular litfic book about college friends and their various trajectories into adulthood, it might just become an unpleasant lump of unpleasant situations. although that schtick seems to work for bret easton ellis. (note to fans of ellis—this is an altogether different brand of unpleasantness—“self-preoccupied and reckless” instead of coked-up sociopaths.)

it opens ten years after the murder of a young girl on the harvard campus, a murder for which a professor was accused, but never convicted. the narrative weaves through the lives of three students and the accused professor, both then and “now,” detailing a tangle of obsessions, secrets, and carelessness that muddied the waters and shaped their futures. it’s more about these relationships than about events leading up to the murrrrderrr; its focus is doubt and fallen idols, guilt, covetousness, nostalgia, and forgiveness.

rufus storrow is the suave professor: aristocratic upbringing, romantically shady background, the fussy and pompous yet charismatic expresser of unpopular opinions that caused friction on campus, particularly with julie patel, the murdered girl.

he falls into bed, and a rigorously maintained secret relationship with georgia, a student whose father is a famous photographer with his own whiffs of scandal about him, and who becomes the novel’s central focus of love, lust, obsession, and envy.

charlie is the working-class boy infatuated with both georgia and storrow, adopting mannerisms and sartorial details and determined to reinvent himself and become the embodiment of the american dream.

alice is by far the best character; the daughter of serbian immigrants, screwed out of her inheritance, pissed off and ready to take on the world. i loved her rage and her calculating drive, and she’s the only character i found sympathetic.

oh, and the murder victim? that was someone else entirely. who she is as a character is not really important, nor does she have any real connection to our key players. she operates as pure symbol—a victim.

i said i found alice to be the most sympathetic, and i do, but it’s not just her but her whole story that is beautiful and haunting (in my brand of “beautiful,” which has splinters). it reminded me a little of Everything I Never Told You, where a child is torn between the diametrically-opposed good intentions of their parents. alice’s parents made the culture-shock move from belgrade to wisconsin, and while her beloved father radovan embraced america and its opportunities and wanted to unleash alice into this brave new world, her mother senka wanted to preserve their culture; to surround them with the familiar comforts of food and language of their homeland. naturally, alice is daddy’s girl—america’s girl—but her mother is a heartbreaker of a character:

Unlike her husband, she hadn’t chosen to study English in school and so, while Radovan settled into his American life easily, following American news, chatting with his American colleagues, she spent her first years in isolation, daunted by her surroundings and kept at home with two small children. Once the children were of school age, Senka’s situation only worsened; she watched her little girl and boy grow more and more independent and incomprehensible; they no longer needed her, and her own poor English barred her from pursuing any meaningful career. In Serbia she’d been an articulate student, as ambitious as her husband, but here she felt trapped, confined to menial housework, to stuttering stiff formulations, robbed of humor and grace. Only those who knew her in her native language knew her at all, she insisted; and if she must live in a nation of strangers, at least her own children should be made to understand her.

it’s passages like this that make me wish this book had been stronger overall, more focused on a single character instead of darting back and forth

in other words, i wish it had just been about alice. ‘cuz she’s a firecracker. i love her bold commitment to being a selfish pessimistic realist, all the way through:

…she was her father’s daughter, finally, and meant to live as he’d intended her to: American and free. Americans didn’t abandon their lives to care for aging parents. They didn’t yield their twenties, that precious, most selfish decade, that brief time in which her ambitious countrymen must accomplish so much: build a career, attract a successful and stimulating yet reliable spouse and, in the meantime, rack up experiences sufficient to console them through the next several decades of at least relative monogamy, part-time parental obligation, and whatever professional and personal stagnation would inevitably assault their impossibly high expectations. A satisfactory twenties was an inoculation against mid-life crisis, and if Uncle Vasily had the first clue about the particular perils of affluent, modern, Western life, he’d have understood that her years of immersion in superficiality were in fact the most responsible course of action she could take.

COME ON! how do you not love that? i mean, she’s highly unstable and generally horrible, but in a way that’s fun to watch.

another part worth calling out involves charlie, and his family’s appearance at graduation. charlie’s father has that working-class disdain for the entitled; for what charlie is struggling to fashion himself into, and he is not shy about showing it. the restaurant scene is priceless, down to his brother pocketing the tip. she writes charlie’s distancing himself from his past beautifully—his strained relationship with his brother and father, his love for his long-suffering mother, and his determination to make his own path through life.

For once, he didn’t feel like pretending he demanded less from life than he was able to take from it, and he didn’t care if his family viewed this as a reproach, as one more reminder of the distance their son had moved beyond them.

while charlie’s dogged resolve makes him a pretty cold fish of a character, he does have a few moments of shine and insightfulness:

What was nobility, really? It wasn’t behaving as if the whole world belonged to you: it was a demonstration of proper conduct and restraint, of not taking more than one was due.

there are beautiful moments throughout—georgia’s sad present-day situation and all the ickiness she found in india etc, but as a novel, it didn’t come together for me the way i’d hoped. but “rocky debut” isn’t a dealbreaker for me, either, and on the strength of some of the writing, i would definitely give her next book a shot.