The targets are just a bunch of heads at the end of the day, and inside each is a big juicy brain, about two pounds of which is water. The human body is mostly water, in fact, roughly two-thirds. We are literally trash bags full of liquid, waiting to pop. There are a hundred thousand miles of blood vessels, connected to a fist-sized muscle pushing five liters of blood around with enough force to squirt ten yards through the air should someone put a bullet through your neck.

Ah, yes. People fascinate me. I could kill them for hours.

i caught the tail end of an episode of America in Primetime this morning, which was focused on the way that the idea of the ‘hero’ has become more and more blurry throughout the history of television; the rise of antiheroes and situational morality and drama reflecting a violent reality and the catharsis of applauding a vigilante sensibility if the end result is just. or something like that – i didn’t catch all of it. but i did catch the david simon parts, first when he was discussing The Wire, and omar in particular – who never put his gun on no citizen, and then in his reaction to Dexter, which was respectful, but also firm – david simon is not on board with a show that celebrates violence to the extent it does, or glamorizes a serial killer into hero-status.

and all that is on my mind now as i sit down to finally review this book. because this is an unequivocally violent book, and while edison, the central character is indeed a killer – for hire, or strategically, for self-preservation, or occasionally recreationally, he’s never cast in a heroic light. or even an antiheroic light. it’s a really unusual angle to approach a character – it’s not about sympathizing with a sociopath, the way Dexter or You are designed and it’s never passed off as an essentially good person doing bad things for noble reasons, or because of trauma or abuse or affective shortcomings. fiegel knows how he wants readers to respond to edison, and he leaves no room for ambiguity. i have the pagehabit copy, annotated by the author, and one of the post-it notes reads:

This was one of the hardest scenes to write, but I really needed to show who Edison was.

i had expectations going into this book that were slightly off – i thought it was about a man, a killer, who kidnapped a little girl and raised her up in his image, and they went off on a léon:the professional/natural born killers/take your daughter to killing spree adventures. and it’s sort of like that, but with many unusual details that make the relationship less…chummy. i’ve read two books this year, with criminal daddy/eager daughter relationships: She Rides Shotgun, and The Twelve Lives of Samuel Hawley, but this one is the least likely to be made into a hallmark channel movie. unless hallmark drastically changes their stance on spree killing.

don’t get me wrong, i really enjoyed this book, but it plays rough and it never lets you become complacent with the character’s acts. it’s a lot like American Psycho that way, where you kind of get desensitized to the body count until ellis is all, NOW I BRING TINY MAMMALS INTO IT, and you’re shocked anew. there is nothing as graphic as that scene anywhere in this book, and edison is less irredeemable a character, but there are several moves i didn’t see coming, and i was like “damn, edison, wtf, dude?”

it’s not just edison’s story; it’s split between him and xtian, the girl he kidnaps at age 8, and the novel covers ten years of their exploits, but while her perspective is interesting, she gets a little harley quinn-flamboyant in her teens, and he’s a more subtle puzzle-box, which to me is more compelling and lasting.

i am very grateful to pagehabit for sending this my way, and i look forward to whatever this author has planned next.

oh, my god – another pagehabit box?? 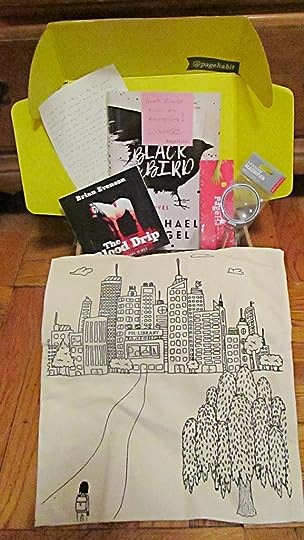 this one might be the best one yet: this book (which i had been really wanting to read), a short story by brian evenson ♥, a cute tote bag, and a tiny magnifying glass for my old-ass eyes that manages to make the body’s failings fun!! plus all the annotations & etc. i am AMPED!