Abigale Hall by Lauren A. Forry
My rating: 4/5 cats

i celebrated spooktober the way one ought to – with tiny candies and scary books, casting a wide net over the sea of horror and horror-adjacent genres to best diversify my frights.

this was meant to be my gothic horror read – a victorian ghost story where the horror was more suggested than overt, with half-glimpsed spirits and flickering candles instead of blood and corpses all over the place.

this book was having none of that.

first of all, it is set in 1947, so there ain’t nothing victorian about it. nor is it written in the swollen-but-restrained dumaurier tone i was anticipating. there’s some drawn-out suspense, but when it wants to bite, it doesn’t hold back. don’t get me wrong – there are no complaints from me for being a much more violent and bloody book than its cartoon-house cover led me to expect: 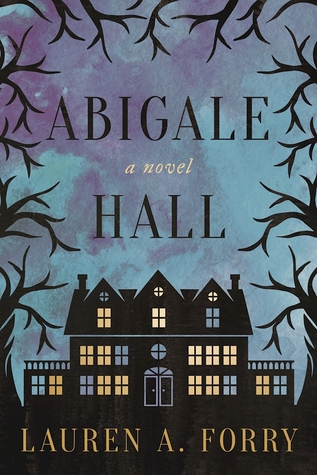 but it was most certainly a surprise.

there’s some excellent writing here, and most of it has nothing to do with the ooooOOOooo horror parts, but in the historical elements. the struggles of daily life in this postwar climate are so perfectly captured, distilled and seeping into even the smallest details of every scene. late-40’s london is really a perfect setting for a horror novel – a city physically torn apart by bombs, a populace still reeling from two massive wars, not knowing if a third one is about to erupt (spoiler alert – it does not), battered and braced for the inevitable, mourning their dead, families displaced, adjusting to shortages and rations and everything all seeming – having been proven to be – temporary, so easily destroyed. it’s the perfect place for nihilism, madness, and the indulging of base impulses to brew like tea – after all – what’s two or three more missing people after so much carnage? after the soldiers and the camps and the postwar suicides and the suffering?

it’s wonderfully vivid and bleak and horrible and that’s all before the real evil starts strutting its stuff, which doesn’t even happen in london, but in a giant spooky house in wales, where two orphaned sisters are sent – sold off by their selfish aunt to work as domestics, which experience will bring out the best and the worst in them. and while eliza and rebecca are living out this gothic horror-on-steroids storyline, eliza’s beau peter searches for clues to her whereabouts all over london, fleshing out the other half of the novel with a gritty urban mystery plotline that – AGAIN – the cover of this book seems to know nothing about.

it’s a bizarre book, but not a bad one. it’s just hard to pin down. it does do the formulaic gothic thing for a long time, all cruel spinster/ghost of murdered woman/missing girls/gruff groundsmen, but it’s also crime fiction and ptsd and exploitation and mental illness and the manifestation of evil in many different guises.

and it gets completely bananas at the end.
cray. zee. town.

i have only read this one time, goodreads – what are you playing at?

first and only review to come.