“Do rabbits cry?” I asked Chester 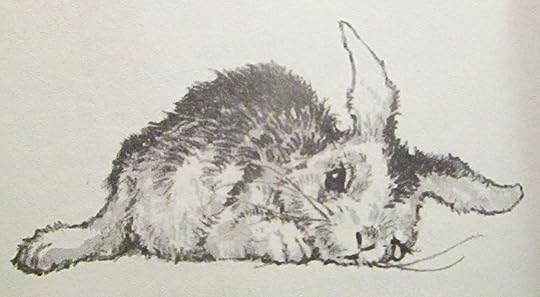 so, because i know you are all awaiting the answer to the question of whether or not bunnicula deigns to make an appearance in the sixth book of the series that pays his bills, after calling out sick to the past howevermany, yeah, he does.

does he in fact “strike again?” hard to say. chester, of course, would have you believe “He’s a spinach sucker! The bane of broccoli! A bad rabbit with bad habits!” out there “… attacking artichokes, sucking squash, biting broccoli, sinking his fangs into fennel – ”

but who knows what that little bunny’s reeeeaalllly up to once the sun goes down?

actually, i’ll tell you, because it’s such a weird story. as you know, because you are a bunnicula fan, even when that little vamp-bunny’s around, he doesn’t actually talk. chester, harold, howie, all the dogs and cats and birds at the kennel – lots of talking. bunnicula? not a peep. ever. as a result, his motivations have always been assumed, usually by the paranoid and high-strung chester – a highly unreliable judge of character, because cats are too smart for their own good. is how i’m choosing to interpret harold’s remark:

…my dog’s brain, which is to a cat’s brain what a corridor is to a labyrinth, could not begin to sort it all out.

so! in this book, everyone’s noticed that bunnicula’s been a little listless of late, after an uncharacteristically frisky/upbeat couple of weeks.

(speaking of frisky, are we ever going to find out more about that girl-bunny bunnicula reportedly knocked up at the end of Nighty-Nightmare? because there’s only one book left in this series and there’s been no mention of these bunny-pups in the last two books).

to condense it for you – chester has determined that bunnicula was cheerful because he saw and heard all the preparations for mother’s day going on in the monroe household and thought this meant his own mother (who [presumably] left him in a box of dirt at the movie theater YEARS ago) was coming to visit and was excited about it. and then when she didn’t come, he got sad. and then escaped to return to the movie theater in which he was found to meet up with her there. which was about to be demolished, a fact that all the other animals knew except bunnicula, even though the first part of this assumption relies upon bunnicula knowing what’s going on in the monroe household enough to be aware of holidays. but somehow not aware of the monroe’s picket-sign-carrying participation in the “save the theater” rallies that have been going on for a long time:

“Your mother and I have put months into fighting this demolition, Pete, you know that.”

pete knows, but somehow bunnicula doesn’t, because as wildly speculative as chester’s theory is, it turns out to be accurate and bunnicula’s about to hop into DANGER unaware.

and here’s as good a place as any to pause in my tearing-down the logic of a middle-grade book to point out that in this book, james howe gets a little meta (and maybe a smidge defensive) about something that’s been bugging me during this reading/rereading journey:

after reminding us that toby gets to stay up as late as he wants to read on friday nights (which i thought was the best ritual/reward ever when i was a kid) and how he always shares his stockpile o’ treats with harold:

He knows how much I love chocolate, and so he’s always sure to have at least one chocolaty delight ready and waiting for me. (Some of my readers have written expressing their concern about the potentially detrimental effects of chocolate on dogs, to which I can only say that while it is true some dogs have been known to become ill from eating chocolate, others have not. Luckily, I fall into the latter category. Also, I hasten to remind my readers that I, like the books I have written, am a work of fiction.)

THAT PRE-INCEPTION INCEPTION WOULD HAVE BLOWN MY MIND AS A KID SO IT’S A GOOD THING I AM GROWN.

it’s still not a great idea to give dogs chocolate, fictional or otherwise, but howe sneaks in a different PSA to make up for it, interrupting chester’s account of bunnicula’s nighttime feeding frenzy:

“By the time I entered the kitchen, he was gone. He had left his victims behind, though, carelessly scattered about the floor like so much litter on a public beach.”

“Uncle Harold,” Howie said, “when you write a book abut this, will you find a way to remind your readers that they should never litter?”

“I definitely will,” I promised.

anyway, it’s another fun adventure story – better than Nighty-Nightmare, which so far has been the low point in the series. this one comes with a game-changing development at the end and i guess we’ll see how that all pans out in book 7, the last of the regular series before it spins off into the “tales from the house of bunnicula” series, which i do not recognize as canon and probably will not attempt unless i’m told by one of youse that it is worth it.

i leave you with one picture: 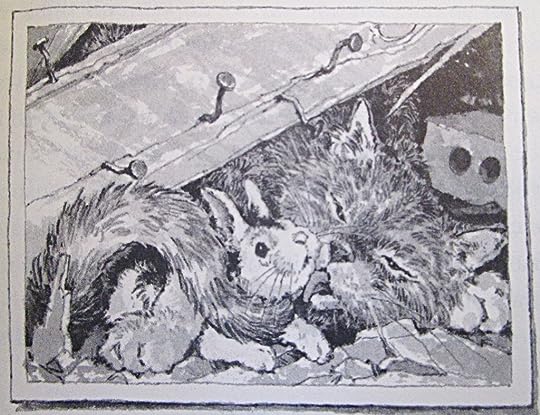 Chester had roused himself from his night’s slumber and was in the middle of doing that stretch cats do where they extend their front paws out on the floor in front of them as if they’re praying and raise their rear ends up high like they’re waiting for the whole world to notice and say, “Hey, that’s some nice tush you got there.”

do not read this book if you do not want to have the final sherlock holmes book spoiled for you.