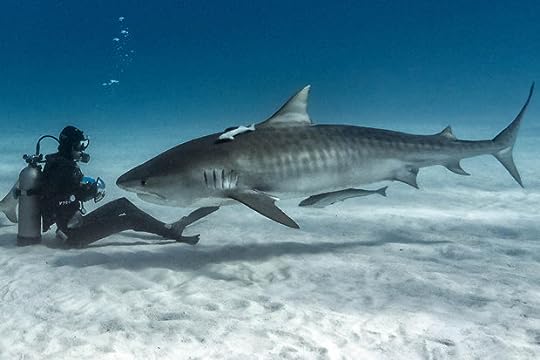 it’s always a good sign when the first word of a book is a typo. followed shortly thereafter by another typo:

A haven’t talked with Cort in ages, and it’s certainly good to see his face against as we stare at one another across the table…

all quotes in this book are [sic]. but not “sick” because love is love, even betwixt man and ancient monstershark 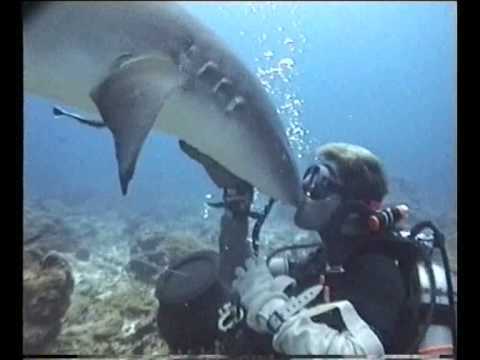 morn and cort are two old buds catching up over some chocolate milk, which as you know, is an intoxicant in the tingleverse. cort is embittered, finding no pleasure in life, and morn – inebriated and impatient, calls him out on this negativity:

”I’m not negative,” counters Cort. “I’m just realistic. We can’t all be like you and just blindly believe that everything is great. Things are getting worse. Love is not real.”

I almost choke on the chocolate milk that I’m sipping and struggle to collect myself. “What?” I stammer. “Now you’re definitely full of it. Love is real.” 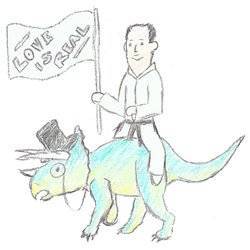 “Love is not real,” Cort repeats. “You think that love is just some kind of physical force that can protect you from the harsh truths of the world? If you swim out in that cold bay right now, is love going to protect you and keep you warm just because you believe in it?”

this upsets morn and he storms off in a huff

”Where are you going?” Cort stammers, chasing after me.

whether or not this would beget ironclad proof of love’s existence, i don’t know. logic is a little screwy in monsterotica. but morn thinks it’s a sensible plan, and off he runs to see it through, only we don’t know how this grand romantic gesture panned out because morn is, after all, five chocolate milks to the wind 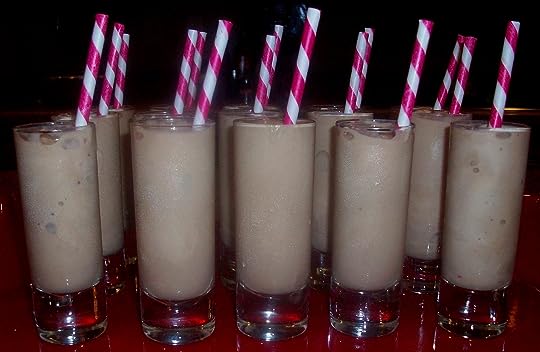 and there’s a lacuna in the text that resumes with him waking up on his couch, bleary-eyed, memory foggy, confronted by a breaking news story about a shark who has been jumped.

a handsome, prehistoric shark who lives in the bay nearby.

reporters are horrified, witnesses dismayed, but that’s no reason not to drop some wikipedia-flavored factoids, tingle-style:

”I think he should go to jail for what he’s done, jumping that handsome Carcharodon Megalodon like that. That ancient shark measuring up to fifty nine feet in length never hurt nobody!”

you know what else never hurt nobody? a little bit of winky meta-commentary:

“You know I thought it was funny at first, but it’s just the same jump over and over again!” 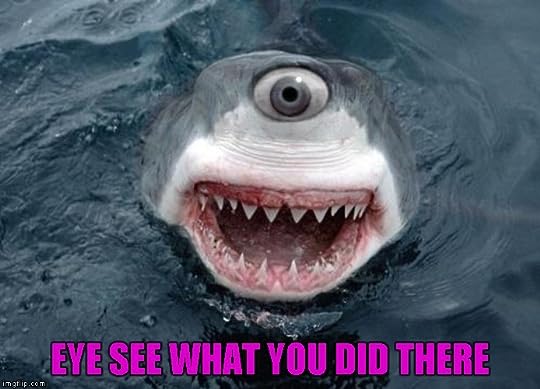 but now we gotta get serious because shark jumping is serious bizzness indeed, with serious penalties, as we learn when morn wonders aloud

Could I really have been trying to prove love so hard that I jumped the shark?

and does a bing search (A BING SEARCH!!!) inquiring, What is the punishment for jumping sharks?

only to learn – The punishment for jumping sharks, prehistoric or otherwise, is complete and utter exile from all civilization, banished to a life of wandering meaninglessly through the desert wasteland. 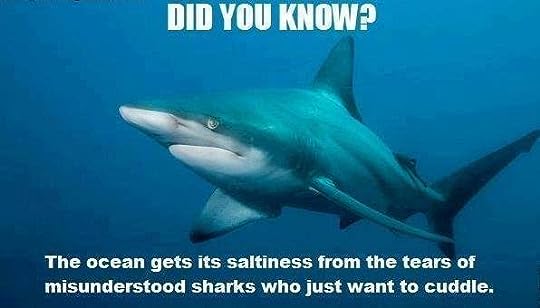 in order to avoid prosecution, he heads back to the scene of the crime in order to apologize to the handsome ancient shark, but when he finds him, there don’t seem to be any hard feelings.

BUT BE PATIENT – HARD FEELINGS WILL SOON BE HARD

speaking of patient, that’s actually who the megalodon is waiting for, there in the middle of the bay

”Are you the ambulance boat?” the prehistoric shark asks, gnashing his rows of seemingly endless, razor-sharp teeth.

“What?” I question, not even sure where to begin.

“The ambulance boat,” the monstrous sea beast repeats. “I’m meeting one here for a drop off. They’ve got a patient onboard.”

“You’re a doctor?” I suddenly question. 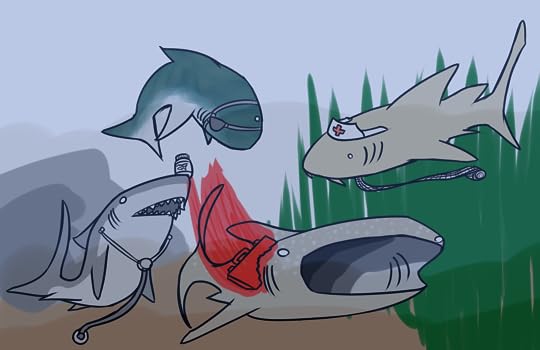 i love that this megalodon is a brain surgeon (named dr. perks yono) and i love that his expected patient reschedules during this story, like “oh, something came up. i will have brain surgery later in the week k thx bai.”

“I need to talk to you about something,” I admit. “I think I was the one that jumped over you last night.”

The ancient monster’s eyes go wide with recognition, then confusion. He shakes his head back and forth in the water. “I don’t think so, I got a pretty good look at the guy who jumped me on that jet ski, and it certainly wasn’t you.”

“Nope,” the Megalodon offers. “You’ve got the same leather jacket thing going on, but this guy was a lot cooler. He kept saying Aye!”

I shake my head. “Yeah, that doesn’t really sound like me. But if that’s the case then why am I all wet?”

The prehistoric shark looks me up and down. “Well, you do look kinda familiar. I think I saw you swimming up there above me, shouting about proving love or something like that. You were wasted.”

there is one way to confirm his identity, because according to the megalodon doctor, whomever was there, doing the jumping, was not wearing pants.

so morn takes off his pants – because they need to get to the bottom of this AND LEMME TELL YA – BOTTOMS WILL BE GOTTEN TO and dr yono goes full little red riding hood tricksy-interrogation on him, “my what big … eyes you have,” coaxing him to tumescence in order to make a proper ID, of course.

I slip my underwear down and step out of them, not at all hiding the fact that I’ve now swollen to a half chubs.

“The guy swimming above me was totally stiff,” Dr. Yono explains. “I think it was you swimming up there last night but… I’m still not sure.”

I’m trembling with desire now, unable to calm myself in the presence of this incredible beast. “Want to give me a hand?” I question.

oh and he DOES

and although the shark on the cover of this book has human hands, this shark has proper sharkfins and if you are concerned about what a hand job from a shark might feel like, considering that those sharky denticles make human skin bleed very easily, have no fear for morn’s delicate peenskin because the dr’s skin is remarkably soft, even on morn’s most tender vittles. BY WHICH I MEAN HIS TESTICLES.

and he very much enjoys the doctor’s examination, but is he ready to up the ante? 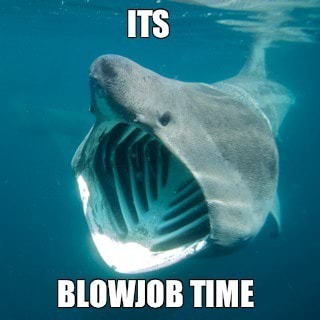 “Do you want me to suck you off?” the Carcharodon Megalodon coos. 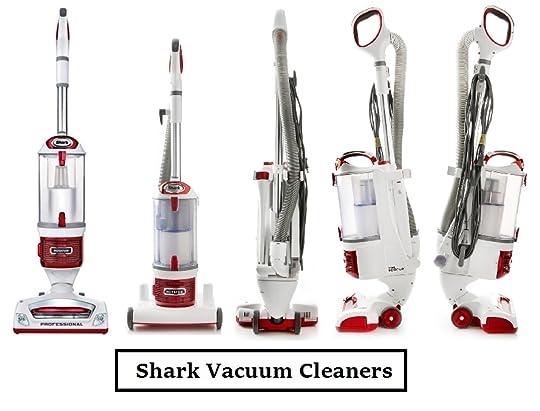 sure, why NOT stick your dick into the mouth of a sixty foot prehistoric killing machine? 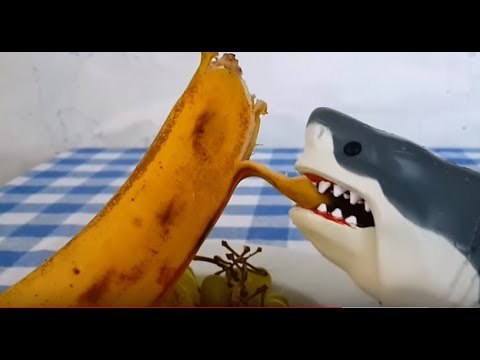 being a prehistoric holdover, the good dr has had ample time to hone his skills. and … evolve some lips. 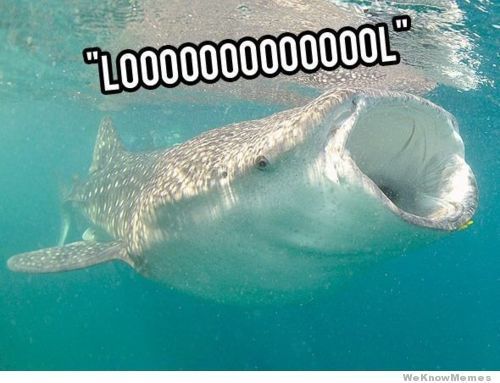 but i think morn is deluding himself a little here

Overwhelmed with aching lust, I reach behind the good doctor’s head and pull him up against me, plunging my cock as far as I can into the creatures waiting mouth.

leaving aside the question of how long morn’s arms must be in order to encircle the giant shark’s head because this is monsterporn and no one’s expecting an accurate representation of biological possibles, let’s not flatter ourselves, morn, with the fantasy that there’s any part of your endowment that’s not able to fit into the mouth of your megalodon lover. “as far as i can?” ain’t no megalodon struggling to receive your teeny peeny.

if he can fit all these nerds in his mouth 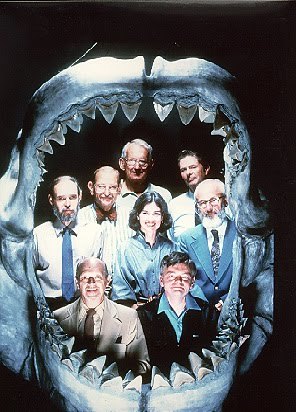 and these people who may or may not be nerds

he’s taking your modest human peen with plenty of room to spare.

just to ram the point home a little more, this is the size of a megalodon’s tooth next to a well-hung banana 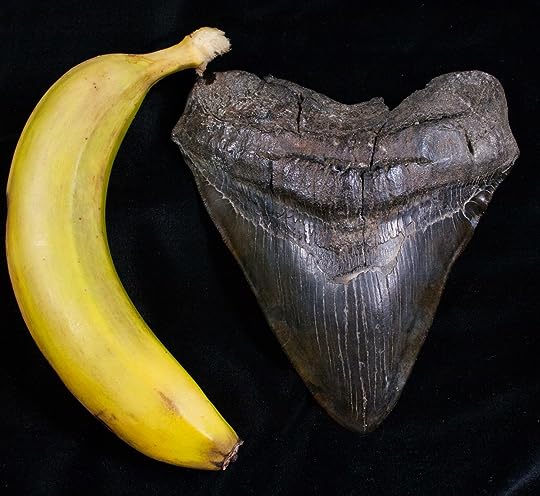 having given, it is now time for the dr to receive and morn, clad in his scuba gear, slithers down below and gives him a little hand action.

It takes a while to get there, but eventually I see his massive member coming towards me in the darkness of the ocean. When I finally reach it, I wrap my hand around Yono’s girthy dick, beating him off with lustful gusto.

lustful gusto = amazing. i can see naming a rustic new england tavern or b&b after this: the lustful gusto. but i digress. 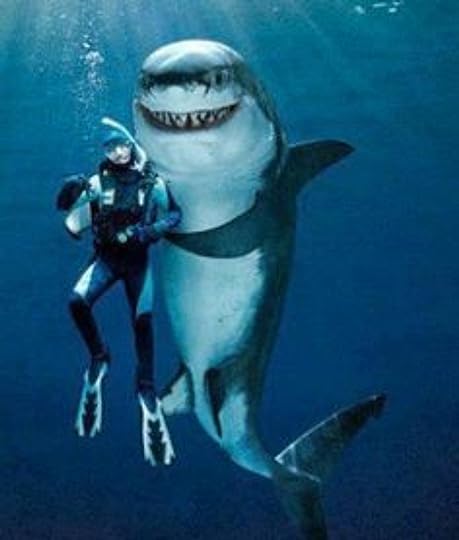 and then it gets weird. 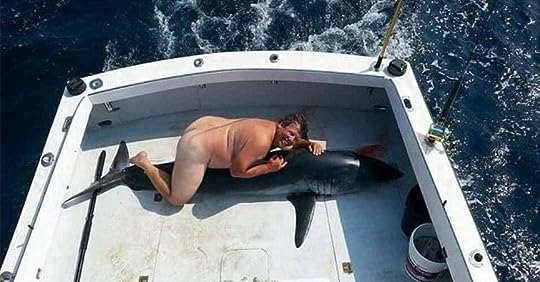 in the middle of all the aquatic pounding, the two realize they are in love

and dr yono gets real ambitious with his lovemaking and, still fully inserted in the backdoor of his human lover, he does some kind of weird after hours sea world shit and raises himself halfway out of the water, thrusting emphatically while propelling himself forward,* eventually resulting in a climactic and messy jizzy fireworks show:

and then, unable to stop themselves in the throes of postcoital momentum like some gay aquatic bestiality version of thelma and louise, they approach the ramp and jump together. 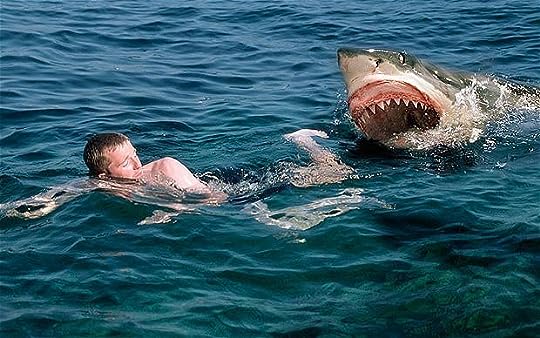 *isn’t this the kind of shit dolphins and other trained water-dwelling creatures do to delight tourists? because i tried to find a GIF of this, using many colorful phrases, and had no luck. however, i have once again, in the course of GIS-ing visual touchpoints for this review, seen so very many things that will haunt me forevermore. 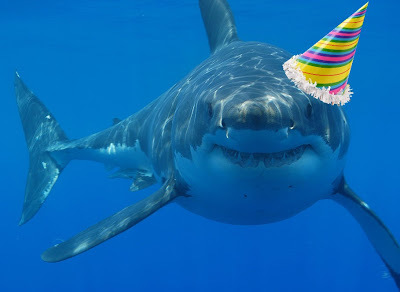