Where the Trains Turn by Pasi Ilmari Jääskeläinen
My rating: 3/5 cats

“Oh what a nice picture! Is it a cow? And that must be a milking machine.”

“No.” (The child is very indignant about his mother’s poor insight.) “It’s a horse-moose who travels in a time machine to the Jurassic period where the dinosaurs will eat him up.”

(Mother takes an aspirin and a glass of water.)

man, some tor shorts are long!! my fault for not doing the scrolly-downy thing to see what i was getting into, and also my fault for not realizing that i had read this author before (The Rabbit Back Literature Society) and only been half-into it. a lot of reviews on here are complaining about the poor quality of the finnish-to-english translation of this story, where phrases like my gay collie Robbie occur, but are not as fun as one would hope. and it’s true that there’s a stiffness to the prose occasionally that makes it kind of…distant. however, the narrator herself, known only as “e.n.,” contributes to this feeling—she’s a woman completely set against imagination or flights of fancy, who abhors fiction, and reads encyclopedias to relax.

It’s hard enough to cope day by day with what presumes to be my own everyday reality; to stir and feed imagination with fiction would just make me lose my sense of reality altogether. It’s pretty fickle already, my understanding of which part of the things I remember has actually happened and what is composed of mere empty memories which never had a reference in the historical continuum that’s called objective reality.

and yet she finds herself in a tor short; one that is infused with all kinds of fantastical happenings and flexible reality.

this story is her written chronicle of the events that happened to her and her son, to try to make sense of what she witnessed and cannot quite accept despite her claims that my memories in their subjectivity and contradictoriness are much too confused for me to bother recording them. e.n. is a cold fish of a woman who does not allow herself to be ruled by grand emotions, and yet was quite reasonably happy (or at least fairly unruffled most of the time). like all of our parents, she had sexual intercourse exactly once, which resulted in the birth of her son rupert.

raising a child proves to be very taxing to her and her need for order and reality. rupert is a particularly imaginative, creative child, whose behavior causes her equal parts love and distress.

More than a couple of times I was seized with a feeling that I had been caught in the middle of The Great Irrationality Circus where Rupert was a pompous mad director. Even looking at him made my head ache.

she is raising rupert alone, having no need for his father gunnar after he served his purpose in half-creating rupert, but she allows him access to their son one day a month, during which they usually go to the railway to watch the trains. in typical colorless prose, she relates

Now and then I found it difficult to believe that only eight years back we’d had intimate intercourse with each other. But Rupert of course was a rather concrete evidence of it, thus believe I must—we both must.

so romantic!! and if that’s not a good enough valentine card for you, she also refers to gunnar as the only man in this life I’d ever allowed to push his male protrusion inside me.

so but one day, rupert returns from one of his train field trips with gunnar all in a tizzy, insisting that the train tried to kill them, and worried that it has followed him home. gunnar has no idea what rupert is talking about, just that he’d suddenly flipped out, screaming and scratching, when they were in the middle of their day. rupert’s mother shoos gunnar away, and tries to talk sense into her son, who keeps claiming that they saw one of the special trains, the ones that leave the timetable and run off rails. his mother is not having that, and tries to talk some sense into him, but several days later, they learn that gunnar had been killed by a train on his way back from their home.

rupert continues to fear the trains and retreats into himself and his imagination, preferring his own company over that of other little boys.

and somehow this woman who only believes in facts and reality comes up with this spectacularly colorful image:

I would have let both my breasts be ground to mink food if only Rupert, too, could have been one of those healthy, noisy, happy children one saw in our neighbourhood.

she decides to rid him of all imaginative stimulation—she burns all his comic books, storybooks, coloring books. she buries all his crayons, paper, and all of his drawings. she forces him into the chess club, the model airplane club, and other places where imagination is suppressed. basically, she’s the worst.

and he accepts it, although he still knows that the train is out there, waiting to get him.

that’s all i feel like relating here, but just know that this story goes on and on, and takes some surprising turns, initially grounded in reality but then slowly allowing room for the fantastic to encroach, against all e.n.’s inclinations.

the writing is kind of a drag, but the ending is interesting and the payoff is worth all the slogging to get there. mostly.

it’s not my favorite tor short by a long shot, but you might like it more than me. 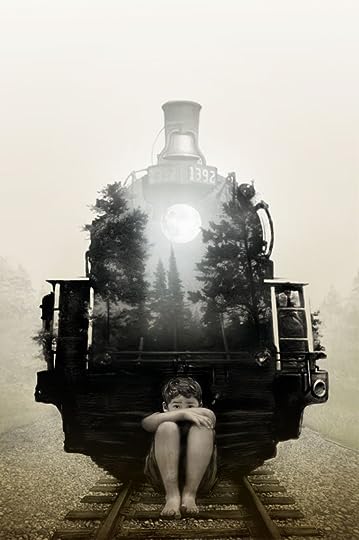