What do they study now, our girls? A bit of addition and subtraction, telling time, making change. Counting, of course. They would learn counting first. All the way up to one hundred. 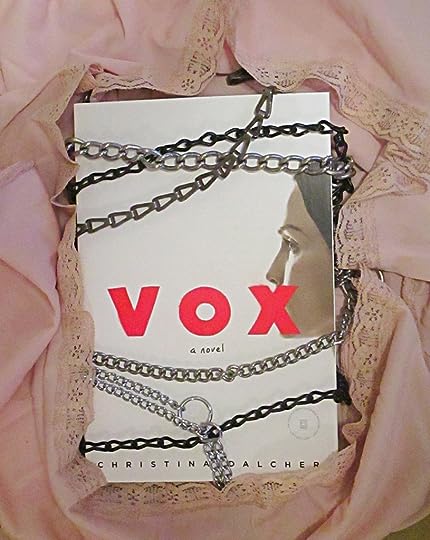 as a thought-piece, i would give this a high four stars cats, but as a novel, it’s got some structural flaws. it would be a very good book club choice, however—plenty of food for thought and discussion. it just needs some conceptual tightening; it’s missing that extra spark that would bring it all up into “amazing debut” territory.

the basic premise is straightforward: it’s a near-future dystopia in which white christian conservative male fundies have come to power and figured out how to keep all of us hysterical, mouthy women down—a metal “word counter” shackled around the female wrist that delivers an electric shock, of increasing intensity, for every word spoken that exceeds a woman’s daily allotment of 100. along with that, all typical dysto-rules apply: homosexuals are imprisoned until they come around and choose heterosexuality, premarital and extramarital sex has heavy consequences (for women), women aren’t allowed to read or write or work or use birth control or even collect the mail from their own mailboxes, and cameras are everywhere making sure these rules are followed.

this book is two things—it’s a cautionary tale about noninvolvement/nonparticipation, about ignoring the signs and the trends until it’s too late, and it’s also an author with a doctorate in theoretical linguistics having herself a “what if” party about excising language from 1/2 of the population.

it’s telling the story it wants to tell, and that’s not the story of “how this happens.” that’s touched upon, sure, it’s not altogether absent, but it’s not a priority. this takes place about a year after the laws go into effect, and things have happened quickly. there are lots of questions left unanswered because again—the hows and the details are not the concern here. i’m not sure what rules apply to deaf women, but i know that hearing women are not allowed to use any sign language to supplement their daily word-allotment. i’m also not sure what is determining or tabulating these word counts—at one point, the main character has one word left in her quota, and she speaks it to her daughter, “Goodnight,” which i would have counted as two words. and what about hyphenates? acronyms? there must be workarounds. but those are my concerns and what i would address if i were writing this book, but i am too lazy so i don’t get to bitch about an author not answering every question i have as a reader.

what i found most interesting was the effect upon the children. (former) cognitive linguist/wife/mother/first person narrator jean mclellan has four children: eleven-year-old twin boys, a son about to graduate from high school, and a six-year-old daughter. the twins are barely present, but the youngest and oldest are better-developed, in how they respond to these regulations, how they are changed. it’s very effective and horrifying to see a little girl adjust and apply herself enthusiastically to the rules, as though it were a game, and to see a young man embrace his role of privileged enforcer.

the weaknesses are mostly in the conflict resolutions. many of them are overcome too easily, too neatly. personal ones, like what i will call ‘patrick’s acquiescence’ and scientific ones like what i will call, ummm ‘look at the science i did just now.’ oh, and ‘final face-off,’ too. the blocking on that is still a bit muddled to me.

an interesting aside—although this was written before the second season of The Handmaid’s Tale aired, there are more than a few details that pop up in both. neither of them make the future look super-rosy. for anyone.