True Crime Addict: How I Lost Myself in the Mysterious Disappearance of Maura Murray by James Renner
My rating: 4/5 cats

in the opening pages of this book, the recently fired, mildly disgraced investigative journalist james renner goes to a gentleman’s club where he manages to derail a perfectly good lapdance into a quiet reflective conversation with his stripper, whose sister’s killer was about to go to trial for her murder.

that is what a true crime addict looks like – someone for whom boobies are not always the most interesting thing in the room.

throughout the course of this book, james renner will investigate crime, get himself incarcerated, be verbally and physically abused, follow false leads, learn that he scored “very similar to” ted bundy on his psychopathy test, spend the night in a room full of teddy bears, find a chilling surprise in a dirty magazine, drink and drive to put himself in the shoes of a missing woman, get into cars with strangers, take the advice of a psychic, explore his own family’s legacy of violence, be internet-stalked and threatened by a creepy dude making targeted videos straight out of a low-budget slasher film, witness his autistic son predict the future with chilling accuracy, discover a modern-day underground railroad, and casually, but earnestly, drop in some theoretical physics bombshell about how there’s a fairly good chance that the entire universe as we experience it is just a computer simulation in which it’s possible to trigger glitches in reality.

this is not your typical true crime story.

this is a true crime story by james renner, whose fiction has never felt the need to confine itself to any single genre or any reader’s expectation so there’s no reason to have anticipated anything different from his nonfiction. however, this approach is much more difficult to adapt into nonfiction, even narrative nonfiction, without the story seeming scattered or lumpy or purposeless.

this book, whose focus is on the mysterious 2004 disappearance of maura murray, is not lumpy.

the recent popularity of nonbook sensations like Serial, The Jinx, Making a Murderer, and The People v. O.J. Simpson have helped to elevate the true crime genre out of its literary gutter, long sneered-at as being the pap of supermarket checkout lines – those garish and jaggedy-fonted mass markets in which violent crimes, usually against women, are exploited for some ghoulish frisson with no merit but shock value.

because while, yes – that is a large part of the true crime market, there are nobler and more meaningful reasons to examine the realities of a world, computer simulation or not, in which violent things happen: to explore causation, study historical context, identify cultural or socioeconomic factors of crime, predict patterns, dissect psychology – to figure out why these things happen, if they can be avoided, and what all of it says about us as a species.

but this book isn’t quite that, either. it’s somewhere in the middle. it’s neither sensationalistic nor academic in its treatment and it lives in this space where memoir and true crime and metaphysics spin into a story of absence and obsession and the impossibility of inherent truth while acknowledging the eeriness of coincidences, recurrences, or as renner borrows the term: fearful symmetry.

this is, instead, a story of a man, suddenly rudderless, obsessed with finding the why and how of a woman’s disappearance, and what the search for these answers did to him: Without the rigid structure of newspaper reporting, I was becoming increasingly manic. The only thing keeping me sane, really, was the mystery of Maura Murray’s disappearance.

renner has the dogged spirit of a journalist with a novelist’s flair for the dramatic, which brings a perfect balance to this kind of writing. he’s a storyteller, with a tone chatty enough to draw the reader in, but his professional background allows for a more authoritative perspective than many – he knows the tricks of the trades of both the media and the police, he has contacts that can lend their expertise to special skill sets like statement analysis, he’s familiar with procedure, jargon and shorthand; what it means when something is not being said, he can identify the anomalies in this case and extrapolate from that. and there are a lot of anomalies in this case, niggling discrepancies, outright contradictions, red herrings.

he also, with his bundy-grade sociopathy, has the kind of tenacious mind that not only sees anomalies, but must understand them and what they signify. he’s obsessive, he won’t back down, he’s a little self-destructive, and isn’t shy about crossing the line from investigation to invasion when he comes up against the reluctance or flat-out animosity of friends and family members who absolutely do not want him writing this book. as his psychologist tells him, claiming that true crime writing may benefit him: “Your mind works like the people you chase after. Like a good detective. You’re a sociopath, too.”

and he just goes balls to the wall, not only picking apart the case, but bringing so much more to the table in his asides and tangents, locating the echoes and odd synchronicities in the bigger picture: the violent history of early new england, the genocide of the abenaki (who believe our universe is a dream and that words have souls), the BTK killer, ariel castro, as well as those found within his personal sphere: a violent grandfather, his own near-abduction as a child, the stalking of his sister, the emerging violent tendencies in his son and his attempts to manage his own rage with prescription drugs and alcohol.

I knew him for what he was: a crazy man only pretending to be dangerous. And he had no idea who I really was: a dangerous man working really hard not to be crazy.

it’s a messy case, but fascinating. during the course of his investigation, he will hear a wide and varied range of theories and suspects from his sources, each plausible to a degree, and maura murray’s squeaky-clean and sympathetic façade will chip away to reveal the laura plamer-caliber mass of secrets underneath.

moral of the story – don’t go missing, because that’s the end of your privacy.

by the end you have a pretty convincing picture of what went down, but as he says right from the beginning: The first thing you learn as a reporter is that nothing you read in the newspaper is true…Every article you’ve ever read is a little untrue. I guarantee it.

There’s no real closure. This is an existential world, my friend.

i know i have grumbled before about authors of nonfiction who insert themselves too much into the story (*koff* The Mole People: Life in the Tunnels Beneath New York City*koff*), but in this case, it feels more natural. a privileged white girl interviewing homeless people living underground, who have established a complicated society with its own rules and hierarchies and history – it’s clear which of the two perspectives is the more interesting.

but here, with a case in which so much is unclear, the story of the frustrations of the investigative process and the strain of a distraction becoming an obsession; of what the helplessness of not-knowing does to a man, a marriage, a family, a mind – that story must hold as much appeal to a reader as the story of a woman who disappeared.

the only reason i gave this four instead of five stars is because full disclosure: i got to hang out with james renner before i read this, and when he was describing to book to me, the angle that most interested me was this idea of tracing a line from his grandfather’s violent crimes, his own experience of abuse, the propensity for violence within himself, modulated with medication, the manifestations of violent tendencies in his son, the discomfort of studying violent men while worrying about his son becoming a violent man, and the fears of having another child: I didn’t know what I was more afraid of: that it would be another boy, or that it would be a girl brought into a world full of dangerous men. i wish there had been more of that, because i think this immersion into the study of violence can have a desensitizing effect until it becomes personalized, and i could have read so much more about his own experiences navigating this psychological minefield.*

and i could have read an entire book about his son’s spooky talents.

okay, there are two reasons for the four stars – also because i don’t want my integrity questioned. these are my true and honest opinions of this book, and even though james renner did buy me a plate of berries, i cannot be bought by a plate of berries. 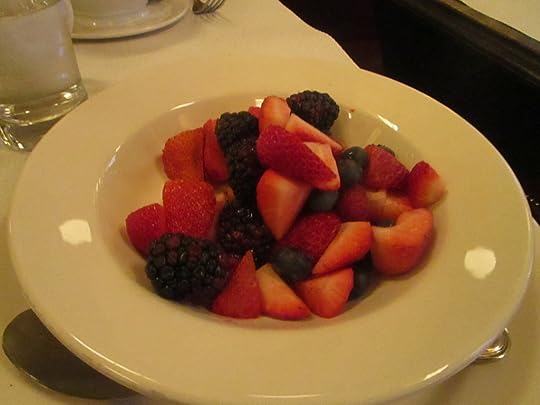 * this is not a true spoiler; it just doesn’t really fit up there, but i wanted to include it as an example illustrating what i’m talking about in terms of parallels and the personal :

View Spoiler »The Cymbalta keeps me calm. I’m a calm guy. I am. But there’s a freedom in blind rage once you give yourself over to it that is as welcoming as any drug. On the other side of rage is a certain calm. The eye of the hurricane. I found that place, at age eight, when I was beaten by my stepmother. Her beatings taught me where to find it. I had forgotten how good it felt to give myself over to that pure hatred, that realm of vengeance where you don’t care about consequence or morality. Beat me. Beat me. See if I care. You’re not getting tears from me. Not today. Today all you get is this smile. which ties in later to an episode with his son, who has already declared “pain is funny,” Time-outs didn’t work anymore. There was nothing left. So we went back to spanking. I should have known how he’d react; it’s what I did, after all. When I spanked Casey, he found that calm place I had discovered. That calmness on the other side of rage. I would spank him and then he’d smile. He’d fucking smile at me and say, “That didn’t hurt,” like he was a young Giles Corey.

THIS is what i’m drawn to the most, in this book – it reads like fiction, but it’s not and it gives me chills. « Hide Spoiler