The Empty House by Algernon Blackwood
My rating: 3/5 cats

that’s pretty much the meat of the story – there’s a lot of dry ice packed around that meat for atmosphere; doing whatever it’s called that makes dry ice do that rock and roll thing

but atmosphere, schmatmosphere, right? we want the ghosties! other than that – the lack of scary ghosties – i suppose it’s a fine story of buyer’s remorse – to go from giddy excitement, from *thinking* one wants to see a ghost; professing the desire to see a ghost, taking steps towards seeing a ghost:

”I’ve got the keys,” she announced in a delighted, yet half awesome voice. “Got them till Monday!”

“The keys of the bathing-machine, or—?” he asked innocently, looking from the sea to the town. Nothing brought her so quickly to the point as feigning stupidity.

“Neither,” she whispered. “I’ve got the keys of the haunted house in the square— and I’m going there tonight.”

and then, once inside the haunted house and confronted with ghosts re-enacting their paranormal crime scenes, to regret having wanted to see them in the first place because OH THE TERROR! which is silly, since these ghosts are truly just doing their own thing, not actively threatening our fella and his aunt, engaging less with them than the spirits in disney’s haunted mansion ride. 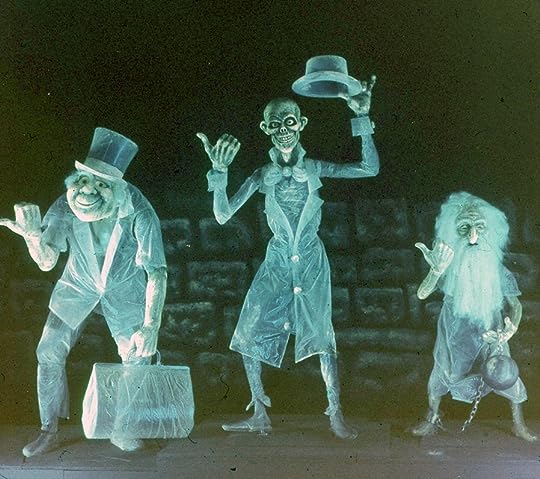 the ghosts have no interest in these two, and frankly, neither do i. this might be my favorite review of this book.

i love seth, i love the idea of these stories, and i friggin’ love the way they look altogether-like, but i haven’t had my dress blown up by any of them yet, and i have been DRINKING.

you’d think that would make me more easily influenced, but alas – i am only more resistant to this book’s supposed charms. #notacheapdate #ittakesmorethanonedrinktogreasemywheels

mission statement copied from my review for One Who Saw

this holiday season, i am going to read through ‘seth’s christmas ghost stories’ line on biblioasis, and i encourage you to do the same. the books are so cute and tiny, you can stuff someone’s stocking or dreidel with ’em! the cover art and interior illustrations are by seth, and they are seasonally spoooooky, blending the spirit of halloween with christmas cheer the way nature, and jack skellington, intended.