The Thing about Growing Up in Jokertown by Carrie Vaughn
My rating: 4/5 cats

We’re not in Jokertown anymore.

First off, we’re the only jokers in sight. All kinds of people fill the sidewalks, rushing back and forth to wherever. Young, old, men, women, all ethnicities, in suits and skirts and raggedy jeans and workout clothes. None of them are jokers. It’s actually weird, seeing so many people and not a scale or tentacle in sight.

hey, just me again over here reviewing my weekly tor short a little bit behind schedule.

last week was another week sans a new shorty dropping, but now that i can hang with y’all wild cards kids, i have ample oldies from which to choose, like this charmer of a tale.

since i had been so mystified years ago reading Nuestra Señora de la Esperanza before i was initiated into the wild cards-verse, i decided to read this one, also penned by carrie vaughn, with my newfound understanding of what this world is all about.

and it is a delightful, almost YA-feeling romp of a story, full of the wholesome energy and feel-good vibes that are What We Need Right Now.

it’s a reasonably self-contained/self-explanatory story, so even if you are completely new to wild cards (or someone like me, with a whopping 4 WC stories under yer figurative belt), you won’t be out of your depth here. sure, the specific details might be unfamiliar, but the woes of the adolescent experience are pretty much universal.

I’m sixteen, and near as I can figure all my friends and I do is worry. What are we gonna be when we grow up, who’s gonna ask us to prom, how the hell do you fit in when you don’t look like anybody else in the whole world. We’ve got a lot to worry about.

the worriers in this case are a group of four joker pals: a gentle fuzzy giant with horns and claws called beastie, splat (née franklin steinberg); who can flatten his body out bonelessly, kris; whose skin is a color-shifting human mood ring, and our narrator miranda; who is built like a whippet with mongoose-like fangs earning her the nickname rikki. and rikki can RUN.

they all live in jokertown on the lower east side, whose residents enjoy a lovely sense of community rooted in their shared-but-varied afflictions, and there’s a real old timey small-neighborhood vibe to the place, marred only by the occasional gawking tourists.

Jokertown gives you some weird ideas of what’s normal, but if you never leave, you never need everybody else’s normal. Normal normal.

still, part of growing up is a restless yearning for new experiences beyond the hometown’s borders, and rikki’s particular joker-trait makes her especially restless—barred from competing in high school track because of her unfair advantage against the nats, she’s longing to release some of that pent-up running energy and just …GO!

There’s gotta be something out there for me to do, where I can run and have it be useful and not just some weird joker trick.

to that end, the foursome decide to take the subway to central park, and, after braving the stares of commuters, they have a fine day in the sprawling privacy of cultivated nature and rikki does indeed find something useful to do with her gift.

i liked this one very much, and i’m glad i was able to right the wrong i’d previously done to carrie vaughn. her relief, is, i am sure, immense. 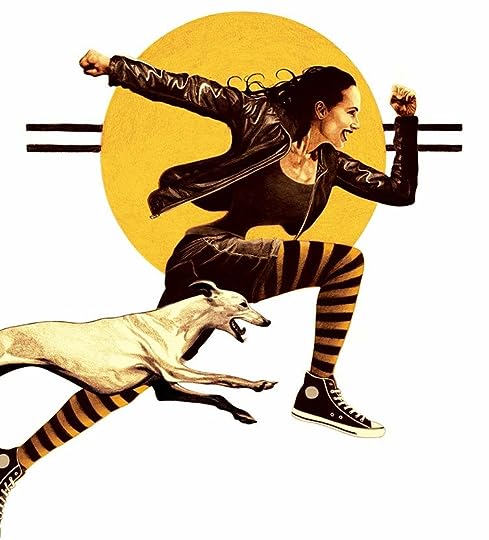