The Plot by Jean Hanff Korelitz
My rating: 4/5 cats

even though i am not an instagram-person, i accepted celadon’s invitation to be part of their little free library promotion for this book, and here i am dropping a copy off at 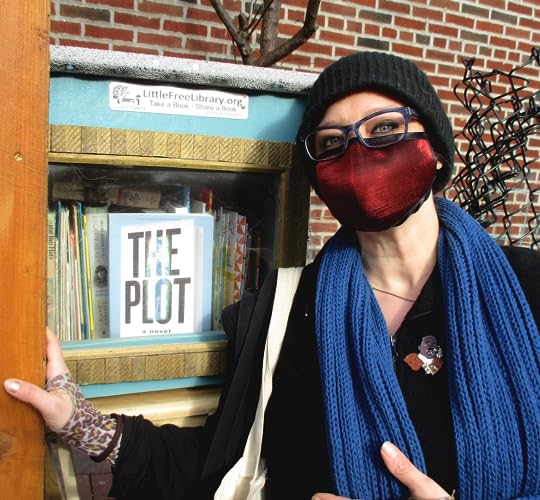 see the people who DO use instagram doing the same thing today @celadonbooks, #ThePlotBook

i’m probably being a little unfair to our dear antihero, the aforementioned former wunderkind-author jacob finch bonner, whose debut novel The Invention of Wonder received such critical praise that he seemed poised on the brink of becoming a Famous Writer. but that early promise fizzled, his career trajectory became a study in diminishing returns, and he ended up teaching creative writing in the low-residency MFA program of a shabby school, becoming more disengaged with each passing year.

you’re not gonna fall in love with jacob, or even feel too sympathetic about his slide into the rut of failure. he’s competitive and envious, and a little delusional about his own talent; his desire to be a writer is more about the prestige of being a writer than the actual work of writing, and he has a very ‘but i WANNIT‘ sense of entitlement about his thwarted expectations.*

the novel opens on jake depressed by the detour his life has taken; his prospects limited, resigned to being a one-hit-wonder paying his bills evaluating the creative outpourings of his students; each year another batch of supremely unpromising wanna-be writers.

but then he meets evan parker, an arrogant fratboyish blowhard, who has this plot. a plot so unusual, so hooky, that it’s destined for bestseller status. evan hasn’t actually written much of it, but it doesn’t matter, because the plot, you see, is enough to guarantee his success. parker is so confident in the ‘can’t fail’ of this plot that he’s not looking for jake’s input as a teacher/mentor—he’s just there for the degree before before blasting off into fame and fortune. evan eventually, grudgingly shares the details of the plot with jake, who stews in jealousy over its originality, resenting the fact that this douchey bro is destined for accolades and success; to live the life he himself has been denied.

it is very much this dynamic:

bone-deep jealousy of genius in the hands of a fool.

so lemme interject to talk about this amaaaazing plot real quick. it’s…fine, i suppose, but ‘nothing new under the sun,’ yeah? it’s a lifetime movie/domestic suspense thriller kind of premise—a variation on some fairly common tropes. it certainly has commercial viability and would appeal to the book club set, but strictly in terms of plot qua plot, i don’t think it’s an idea that would necessarily make anyone swoon over its conceptual originality.

anyway, time passes, jake slips even further down the professional ladder, and when he learns that evan has died suddenly, leaving no trace of his manuscript behind, he decides to snag that golden plot and write the book himself, calling it Crib, and it does indeed become a blockbuster sensation, catapulting him into the life he’s always wanted—book tours and interviews and praise, marrying a wonderful woman who is—more importantly—a fan, and then he starts receiving anonymous messages calling him a thief and threatening to expose him.

which, no big deal, you can’t copyright a plot, right? and it’s not like he stole any of evan’s content, even if it’s a little ethically iffy because of the whole teacher/student thing. still, finders, keepers, dead men can’t sue &etc. only it turns out that evan’s plot was ripped from a real-life situation and someone isn’t too keen on their story being out there in the world.

jake’s investigation into the identity of his accuser and the circumstances of evan’s connection to the events of THE PLOT are back-and-forthed with excerpts from Crib that finally reveal the details of THE PLOT—the juicy secret someone’s determined to protect.

it’s not an aha shocker of a reveal—there are some references in here that’ll set off alarm bells in savvy readers who have two specific book-notches on their belts, but korelitz builds suspense well, and i really enjoyed the claustrophobic tone of the ending (not the epilogue). but to be honest, the best part of the book was not the mystery, which was a bit predictable (and, frankly, i don’t understand the why of it—why risk exposure?) but it was the writery stuff—the publishing details, the professional envy, jake’s questionable self-evaluations and justifications, the frustration of settling and the humiliation of teaching—it’s all wonderfully, bitterly exposed; a scab peeled back.

The Clive Cusslers and mom bloggers might still be persuadable that Jake was a famous, or at least a “highly regarded” young (now “youngish”) novelist, but the would-be David Foster Wallaces and Donna Tartts who were certainly present in the pile of folders? Not so much. This group would be all too aware that Jacob Finch Bonner had fumbled his early shot, failed to produce a good enough second novel or any trace of a third novel, and been sent to the special purgatory for formerly promising writers, from which so few of them ever emerged. (It happened to be untrue that Jake had not produced a third novel, but in this case the untruth was actually preferable to the truth. There had indeed been a third novel, and even a fourth, but those manuscripts, the making of which had together consumed nearly five years of his life, had been rejected by a spectacular array of publishers of declining prestige, from the “legacy” publisher of The Invention of Wonder to the respectable university press that had published his second book, Reverberations, to the many, many small press publication competitions listed in the back of Poets & Writers, which he had spent a small fortune entering, and, needless to say, had failed to win. Given these demoralizing facts, he actually preferred that his students believe he was still struggling to reel in that mythical and stupendous second novel.)

* this is probably too close-reading to be of interest to anyone casually checking out this review to see if they wanna read this book, so i’m plopping it into footnote territory because i appreciate the character-work. this is from an early scene (ARC p 18), at a start of semester barbecue where jake and alice—the poetry teacher, are chatting. alice has praised his work and been self-deprecating about her own, and jake thinks she may be flirting. he’s a bit dismissive of poetry, but he’s all puffed up by her appreciation of his novel, with being “thoughtfully admired” by another writer, and he responds indulgently with “studied modesty” and more than a little condescension until she divulges:

“I’m starting as an adjunct at Hopkins this fall, but I’ve never taught. I might be in pretty far over my head.”

He looked at her, his reserve of goodwill, already small, now swiftly draining away. Adjunct at Johns Hopkins was nothing to sneeze at. It probably meant a fellowship she’d had to beat a few hundred other poets out for. The university press publication was likely also the result of a prize, it occurred to him now, and just about everyone coming out of an MFA program with a manuscript went in for every one of those. This girl, Alice, was quite possibly some version of a big deal, or at least what passed for a big deal in the poetry world. The thought of that deflated him utterly.

oh, that seethe. it is worth noting that in alice’s first appearance, she “looked to be about his own age,” and in her second, she’s a “woman…standing beside him,” but then—tellingly enough, when he feels vulnerable by her accomplishments, he reduces her to a “girl.” and i knoooow this is third person, but it’s a very close third person POV…until it isn’t, and that little dig is just jake all over.

there’s another book on the publishing horizon that sounds like it might be friends with this book: Kill All Your Darlings, and even though i read and didn’t love a different book by david bell (Bring Her Home), i really want to read this new one.