The Pallbearers Club by Paul Tremblay
My rating: 4/5 cats

this is a book about the complexities of friendship. it’s also about an epic jacket battle* during which kant’s ideas about the sublime are used as fightin’ words.

clearly, there’s a lot going on in tremblay’s latest, and ain’t none of it easy to summarize intelligibly in a little book report (i do not envy anyone tasked with BISAC-ing this one), but let’s give it a shot…

it’s a genre-slurry of horror, humor, history, memoir, metafiction, and whatever’s more meta than metafiction. it’s also stylistically playful—shaped as the manuscript of a memoir written and rewritten over the course of many years by the pseudonymous art barbara (who is maybe/maybe not tremblay himself). in it, art unpacks the details of his life and decades-long friendship with the also-pseudonymous mercy, who took him under her leather-clad wing when he was an awkward teenager and has been in and out of his life ever since. her influence on him has been profound, life-changing, and, art suspects, maybe even a little diabolical.

now, mercy has stumbled upon art’s manuscript, and has taken the opportunity to annotate his version of their relationship, offering feedback and corrections in the margins; contradicting art’s memories of their shared experiences, critiquing his writing style and word choices, questioning his portrayal of himself, or of her. 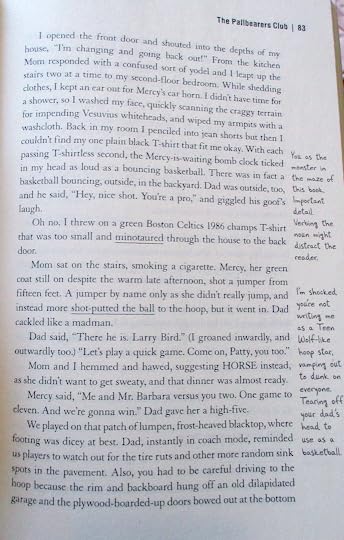 (i am team VERB ALL THE NOUNS!) 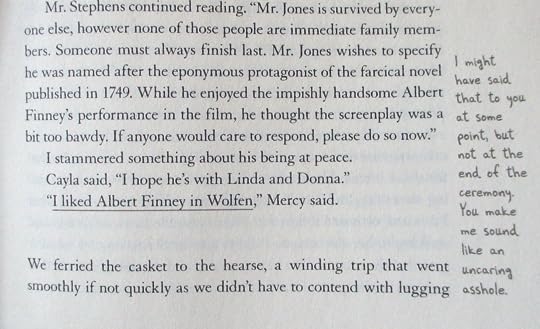 through these comments, which alternate between teasing and confrontational, we get two very different perspectives of the central characters and their motives, and some insight into the dynamics of their relationship—a platonic m/f friendship whose central question is not the cheeky “will they or won’t they?” but the ominous “is she or isn’t she?,” and the dark suspicions art has been nursing for years about mercy and her effect on his life (and her furniture) shifts the narrative into spooky, uncanny territory.

they met during art’s senior year of high school, when mercy responded to art’s ad recruiting members for the pallbearer’s club; a group created by art as a sort of professional mourner service for people who died without family and friends to see them off into the great beyond.

a gangly, scoliosis-stooped loner, art was immediately drawn to the enigmatic and effortlessly cool mercy, who became his virgil into pot, punk music, and the wonders of providence, both its contemporary (for them) club scene and its eerie historical legends, like the one about mercy brown, a notable woman whose story is known to all of little rhody’s babygoths. 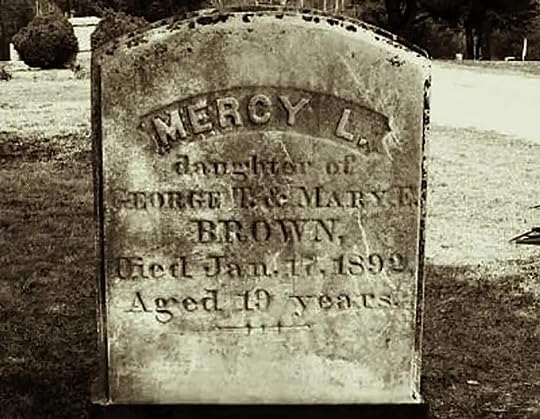 their friendship changed his life, but the precise nature of that change is the crux of this he said/she said account; a game of pin-the-tail-on-the-unreliable-narrator that depends on whether you believe art, who insists on referring to his book as a memoir, or mercy, who is equally insistent on reclassifying it as a novel.

although she’s—literally—sidelined, mercy is a vibrant, multifaceted character whose personality shines brighter in her brief comments than in art’s smirking/sullen version of her. she can be sarcastic and barbed, pushing back against art’s veryserious literary endeavor with some much-needed comic relief:

The rest of this chapter? Jesus, man. The idea that you were going to sell/publish this as a memoir is batshit insane.

but her reactions to what art’s written about her are just as often desperately sincere—wounded by his misperceptions of her and her intentions.

That hurt then, and it hurts now reading it.

if art is meant to be paul tremblay/not paul tremblay, it’s not a very kind self-portrait, either in his physical descriptions, his behavior, or his writing skills, which—as art—are frequently turgid and overwritten. concerning the surgery to correct his scoliosis:

I was going to emerge from the surgery physically transformed. Maybe not quite a butterfly poking through a chrysalis, but my kyphotic, cowering body would be radically altered/reconstructed by this time tomorrow. It might not be enough (it would never be enough), but I hoped it might be.

that is a good example of art’s prose-stylings; dripping with self-deprecation, laden with ominous foreshadowing and unnecessarily grandiose language, and mercy’s more lively, conversational voice is a breath of fresh air as she rewrites his-story, often better, and certainly less self-consciously, than his own version of events.

I sense you leaving, and I want to say a single word that somehow means sorry, please don’t go, help me, it’s not your fault, I wish it wasn’t my fault, goodbye.

I wrap myself around your leg and I sift myself through your very essence. I shark within your cells, and I breathe you all in

I am losing you and the loss is aching and delicious and bottomless and as addictive as the gain, as the replacing.

You open the door, stand at the precipice, break away, and leave.

mercy accuses him, multiple times, of romanticizing, lying, confabulating, she is incensed at his “libelous portrayal of my dialogue,” but as the book progresses, detailing an aimless life derailed by health issues, paranoia, and substance abuse, her commentary becomes longer and increasingly revealing, and buried beneath mercy’s humor and her playful jabs are some heartbreaking realities that eventually—maybe—lead to the truth.

i don’t know if i succeeded in my goal of summarizing this intelligibly, but i certainly plopped out a lot of words, so imma tie it off here, WITH ONE MERCY-LIKE MARGINAL NOTE:

considering that each chapter of this memoir novel is named for a hüsker dü song, with additional titles snuck into the text (i see you there, The rest of the ride to the city was candy apple gray…), it is BANANAS that The Girl Who Lives On Heaven Hill did not find its way into the book. BANANAS.

if you want your copy to have spikes, you’re gonna have to DIY—bookstores and libraries frown on that kinda thing.

oooh, and in the finished book, mercy’s text is IN RED!!!

in this book, the narrator mentions being at club babyhead in the 90s, a club yours truly also frequented in the 90s. therefore, it is within the realm of possibility that karen brissette (the one who is ME, and not the character from tremblay’s novel A Head Full of Ghosts) fictionally crossed paths with the pseudonymous narrator (who may or may not be paul tremblay), at that club or any of the other providence institutions namedropped in this book, and all i gotta say about that is JEEZ, tremblay, stalk much?