The Museum and the Music Box by Noah Keller
My rating: 4/5 cats

It is winter in the city. Snow dusts the rooftops with a glistening silver, disguises the identity of certain streets, buries children on their way home. The naked statues of pale maidens are clothed now in dresses of frosty white. In the attic it is cold. Like the rats, I build a nest of papers, ancient texts, parchment and papyri, scrolls and palimpsests. I crumple them and stuff them beneath my coat, but still I shiver. I remember how warm your body was, as if for a heart, you had a tiny sun. We were planets, the two of us, orbiting in darkness.

this is one of those stories that i liked, but i do not expect many other people to like. what actual “story” there is is pretty ambiguous; you are presented with a series of images and given the opportunity to infer enough to be reasonably satisfied, but it’s an elusive little slippy number, and the reader is kind of abandoned in the flow of the prose.

as my idiomatically-challenged high school french teacher used to say, “you can lead a horse to a river but you cannot always expect him to dunk his head in there.”

this story is not for people who want to dunk their heads in there.

this is more for people who appreciate atmosphere and can get caught up in beautiful imagery without having to have loose ends wrapped up. this story is all loose ends. it’s a scenic drive off a cliff.

The map is old; one edge is singed by fire, the other eaten by mold. Ink seems to vibrate across it, a frantic tracery of lines. Island and fjords, inlets and bays, river mouths which open like dragons, spitting fiery deltas into the vastness of the sea. Crisscrossing lines cover everything, like the fishermen’s tangled nets. They tell of old trade routes and prevailing winds, currents and gyres, channels between wreck-strewn reefs, the migrations of singing squid. Beneath all this I follow your journey. The map gives no mention of your vessel, so I do not know how to imagine you: the captain of a felluca or dhow, oarsman of a trireme, helmsman of a junk? What were you seeking, as you sailed north, through the Bay of Kes, into the Morlian Sea? Was it treasure? A chest of gold beneath coral sand? Revenge, perhaps? The map is silent, too, on your motives, as you thread the Thevrian Channel, as you round the Cape of Bitter Morns and set your course, north by northwest, into the vastness of the Nameless Ocean. Why do you spin in circles? Are you searching for some hidden isle not inked on any map? Some ancient beast or vast leviathan? A wise and pendulous jellyfish, whose answer you seek to some perplexing riddle? Or did a storm, clenching you in its fist of rain and wind, hurl you so far off course? Did you descend into madness, led astray by a glimmering mirage, a host of angels with green-gold scales which swim beneath your bow? Or was there mutiny? Silent, stupid map! You hint at everything yet tell me nothing. You are not smooth like her skin, nor do you curl round me, enclosing me in whispering softness, sealing me from the world’s wind.

i think that is lovely, if insubstantial. and if this were a larger story—a novel, for example, the lack of closure or concrete story would probably irritate me. but in this small, dreamy shape, i thought it was pretty little escape into the swirl of words.

and i am capable of enjoying something that strikes me on a visceral level, even if it makes no sense. i mean, what the crap does this mean?:

and yet, it is a fantastic song, where its moodiness makes the lyrics work. the atmosphere supplies the clarity the actual words lack. and that’s what this story does, for me. it’s a little tone-piece, and i dug it. many will not. 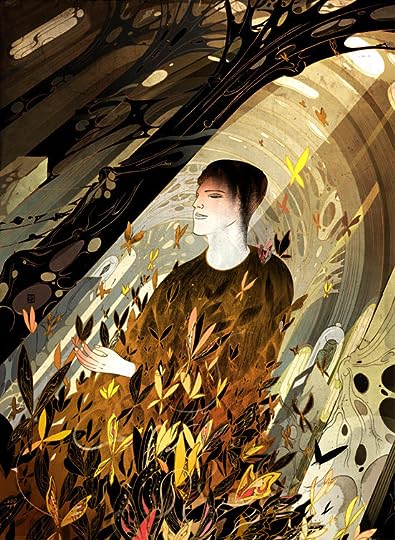