The Hatching by Ezekiel Boone
My rating: 4/5 cats

She didn’t know how many of them there were, but they were frantic. Dozens of them at least. They’d been packed in the egg, and they came out in a swarm, their bodies unfolding, alien and beautiful. Big and fast, black apricots thundering against the glass. Skittering.

if you’re looking to read a book about carnivorous spiders attacking humans and animals, this is one of them! 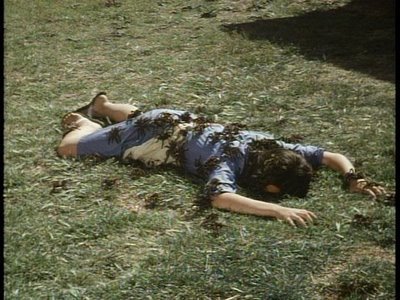 which is not meant to sound dismissive or deflecting, but this is one of those books that delivers exactly what it promises: spiders coming to get you. 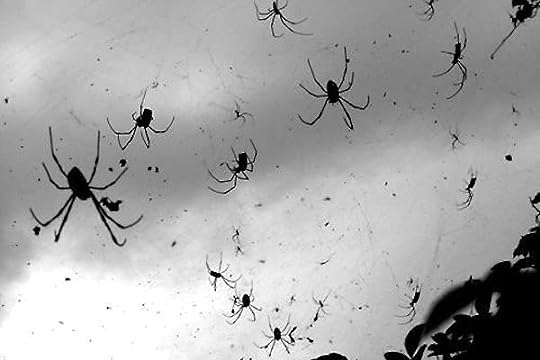 it isn’t trying to redefine the horror adventure novel or using the allure of killer spiders to secretly sneak in some social or political agenda or make you think real hard about anything beyond ‘WHAT’S THAT CRAWLING ON MY ARM??’ 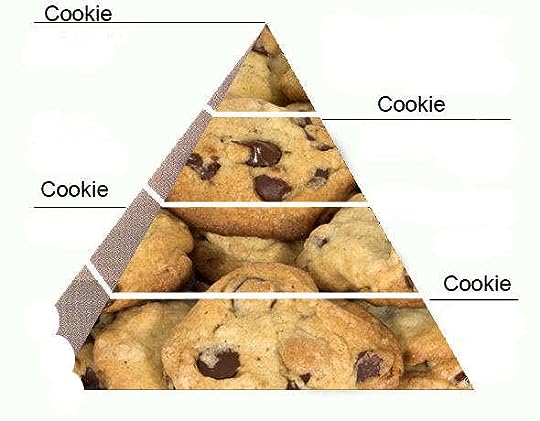 and is taking back the world, one massive flood of carnivorous spiders at a time.

although the writing here is several rungs above that of your average syfy original movie, it still gives you pretty much all of the guilty pleasures those movies provide: bloodshed, horror, humor, creep factors, etc. however, this isn’t trying to replicate or rejuvenate the spirit of those classic pulp ‘nature attack’ books like the (spectacular) guy n. smith crab series,* so it’s considerably less schlocky and crass and offensive and is instead full of progressive social elements like lady-scientists AND a lady-president; competent women who haven’t sacrificed their sexuality, as well as people of color in positions of power and gay survivalists. which is to say the complete opposite of those guy n. smith books.

The Hatching is the first book in what will hopefully become a long-running series, and the cast of characters is very large (although somewhat smaller by the end, because spiders.) there are some story-spokes i’m not seeing the significance of yet (scotland, anyone??) but i expect that in the forthcoming books, these will be more prominent and plot-driving.

in any case, it’s a fantastically fun. i’m going to risk quoting a longish scene because i think it’s the perfect moment of “shit going wrong fast” that makes this book so much fast and skittery fun. and i don’t want to hear any grief about spoilers. this is a book about killer spiders. here are some spiders, killing:

The camera crew finally gave up on the traffic and set up on McCarthy Quad at the University of Southern California. It was the perfect shot for a reporter who couldn’t get an angle on the real action. The dichotomy of reporting on fear and chaos from the middle of an ivory tower oasis. Students walked past in the background as if nothing was going on twenty-five miles across town. The reporter blathered excitedly, filling time in the way that only a seasoned pro can fill time when the facts are almost entirely speculation.

And then, the spiders came gliding down from the sky.

At first, there weren’t many. The camera caught a few black dots against the cerulean sky, cotton candy trails of silk streamers looking like vapor trails. But then some of them started drifting down. For a few minutes, it was almost comical. The camera recorded one landing near the reporter who promptly squashed it with his shoe. There. What was so scary about that? If you’ve got a shoe, you’re safe. Around the reporter, however, students were pointing and beginning to scream. And then the camera caught one student flailing her alarms, five or six of the large black dots scurrying over her, and then a burst of blood from her face, her shirt staining crimson. And more screaming. And more screaming. And more and more and more and more. And the camera suddenly dropping. All Teddie could see on her screen was pavement and shoes and socks and the alien movement of spiders, and then just the lower body of the reporter, his legs kicking and then kicking more weakly, and then not moving at all. And all of it, Teddie realized, running live because she hadn’t ordered it cut away.

That’s when she threw up the second time.

this book is just sheer spidery delight and i cannot wait for the follow-up because i’m sure there are more animated gifs of spiders on the internet that need to be used.

*of which, YES, i have only read TWO, but i gotta say – they are amazing. i mean, if you like sexist racist homophobic softporn books where giant crabs kill people. and you do.

okay, so a lot of times i get review requests and they’re for things that i know i’m not the right reader for, like romance or certain kinds of fantasy, but every once in a while, i get a request that i’m pretty sure comes directly from angels who are reading my soul.

so thank you, angels.

bring your carnivorous spiders to me. 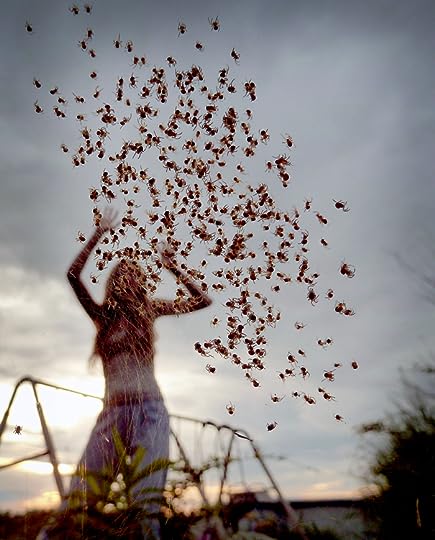 i got the arc today, and it’s pretty rad. 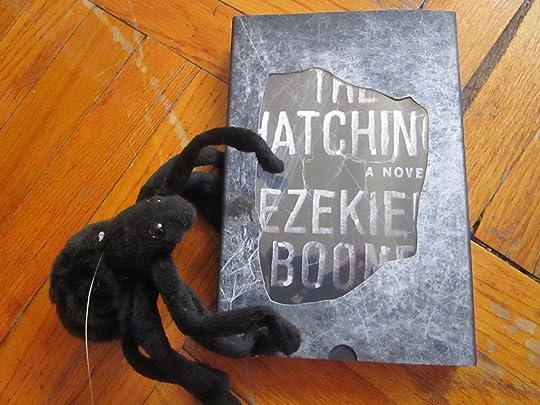 that’s my own spider. it is not carnivorous. it is charlotte.

this is the back of the slipcase, all webby 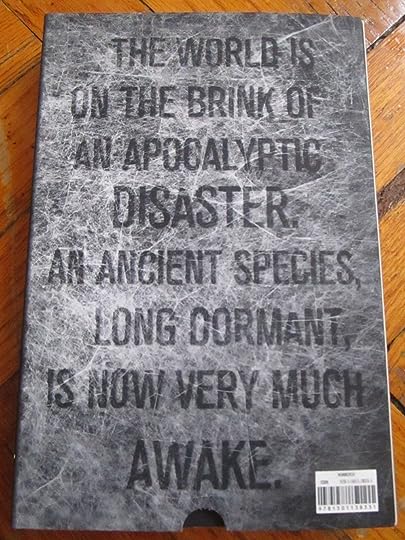 and this is behind the book in the slipcase: 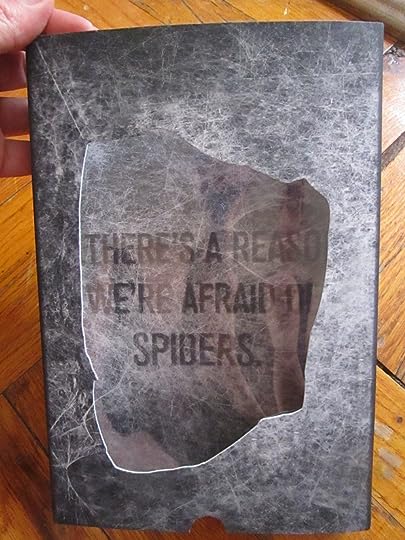 and for good measure, this is maggie “i ain’t afraid of no spiders” goose 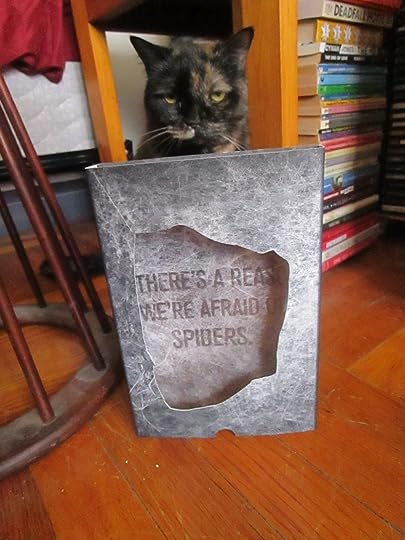 i love well-designed arcs. i want to read this one SO bad RIGHT NOW, but bossy stack is bossy 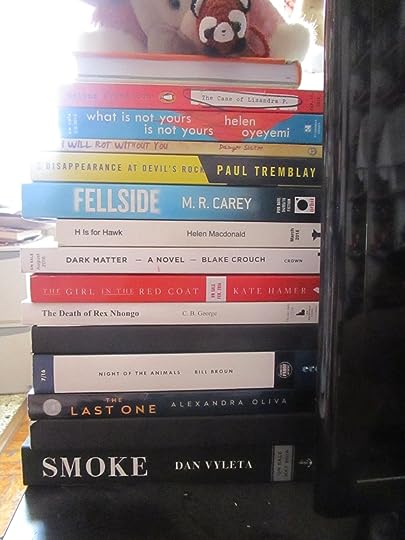 but imma let this one cut the line a bit. sorry, H is for Hawk – you’ve waited this long…