The Grace Year by Kim Liggett
My rating: 4/5 cats

this book loves me 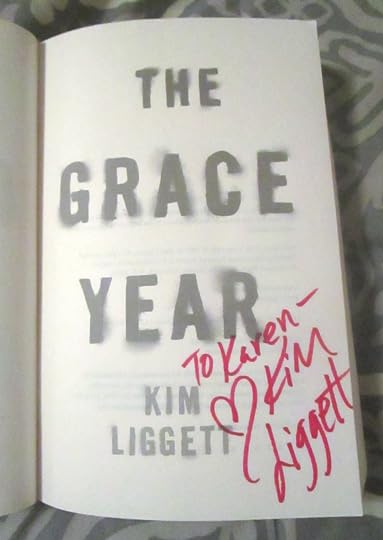 but i only consider it a really good friend.

i had been looking forward to reading this like crazy, but i didn’t love it as much as everybuddy else, and that makes my readerheart sad.

the premise sounded outstanding: speculative feminist fiction featuring a hyper-patriarchal community in which the fear of female sexuality is so profound that sixteen-year-old girls are rounded up and exiled for a year in an outlying compound; isolated from good decent folk while the potency of their sexual awakening is released harmlessly into the wilderness so they can then return purified, ready for the duties of marriage IF they have been chosen by an unmarried man, or for the working world if they have not. no one who has not gone through the ordeal themselves knows what *actually* transpires during the grace year—speaking of it is forbidden, but many girls die or do not return, giving even more strength to the belief in the seeeeecret magical power of sexy teengirls.

through the eyes of reluctant and rebellious tierney james, we will learn all about what goes on behind those closed gates, when girls who have never been allowed freedom, agency, or any control over their lives whatsoever are thrown together and forced to survive a whole year without supervision or intervention, with uncivilized ‘poachers’ ready to kill them if they stray into the woods, all while they are—let us not forget—being relentlessly purged of their sexual toxins; exposed to the highly-concentrated outpourings of so much dangerous female magic.

spoiler alert: contrary to what we all know about what happens when teengirls are left to their own devices, there are zero sexxy pillow fights.

i loved about 3/4 of this book. it started out with great promise, intensifying suspense, mysterious details—building the world of this sexually repressed, misogynistic community where troublesome wives can be gotten rid of—in that old public execution-y way—for dubious reasons, all on a man’s say-so, thus freeing up his bed for some sweet tender teenbride, where marriage is the only salvation or protection for women (unless—of course—you become troublesome), where women can be banished for minor infractions, or for the infractions of their sisters, fostering a climate of fear and competitive viciousness as social survival mechanism, pitting women against each other, and now let’s toss a couple dozen adolescent girls who have been told they have magical powers into close, unmonitored, quarters and see what happens!

bring on survival of the cruelest.

all of this was great—the character dynamics were as fierce as i’d expected, the spectrum of emerging personality traits allowed to develop in this self-governed community felt authentic, the psychological stress and escalating tension was well-handled and that reveal was top-notch. it reminded me of two other books that would spoil this book if i named them here and would spoil THOSE books if i put them in spoiler tags, so i’ll just appreciate it on my own. but if you want some name-droppy readalikes, this is definitely Lord of the Flies meets The Handmaid’s Tale meets The Crucible.

around the 3/4 mark, however, it lost me a bit. there was a big chunk of story that revisited already-covered ground without contributing anything new, there was a completely perfunctory love story; one with necessary dramatic payoff, sure, but its development was bland, and the story seemed to lose its way. i thought the ending was strong, if a little on-the-nose, and my overall post-read impression is favorable, but that big disappointing chunk lost momentum for me, and it was hard to recover.

also, speaking as someone who has never referred to a map in a book that included them, for the first time ever i really could have used one. it was hard for me to picture this location, to understand where the safe places were w/r/t the compound, and how locations were…arranged. i read this as an arc, and it’s possible the finished book will provide one for visualizationally-challenged folks like me, but i struggled a little.

i liked it more than i didn’t, but some of it falls apart under scrutiny. so, do not scrutinize! take it as allegory, as symbolism, read chelsea and tatiana’s excellent reviews, and i will round up my 3 1/2 stars cats because i did like so much of it.

View all my reviews