The Candy House by Jennifer Egan
My rating: 5/5 cats

first things first: you can totally read this if you haven’t read A Visit from the Goon Squad; the book that birthed it. but you should read it, because it’s great.

of course, i read A Visit from the Goon Squad over a decade ago, so i was a bit worried that my honeycombed memory of all of the things that made it great would affect my understanding or enjoyment of this companion book. i really should have been worried about my brain’s ability to track this one, which is a LOT all on its own.

this book deserves, and rewards, a reader’s full attention. it’s not difficult to follow, but there are a lot of characters, and a name mentioned offhand in one chapter might get their very own POV chapter down the line, while others may never come up again.

unfortunately, circumstances and deadlines got between me and this book, and i had to put it down a few times to focus on other thing$, so each time i picked it back up, i had to do a little back-flipping scramble through the chapters to refresh my memory about who each of these characters were and who they were to each other.

i would like the world to stop, just for a day, so i can reread goon squad and this one without falling behind in everything else.

like goon squad, The Candy House is more a collection of interwoven stories than a novel (when i was, belatedly, trying to refresh my memory of goon squad after reading this, i went over to its wikipedia page, which learnt me that egan “considers the book to be neither a story collection nor a novel”).

this one is structured much the same; a tonal novel fragmented into a whirlwind of POV shifts, time shifts, stylistic shifts; rebooting itself chapter by chapter as recurring characters glide in and out of the narrative, brushing up against each other in a complex web of relationships. it is triumphantly interlocking and i can’t even imagine how much diagramming she put into this. 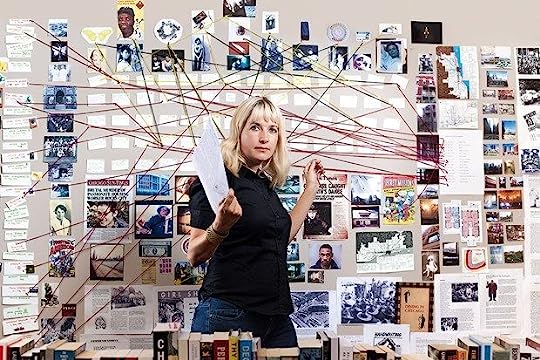 NB: that is not jennifer egan. her wall is probably even crazier.

it’s a tardis of a novel—it’s fewer than 350 ARC-pages, and yet it contains too many multitudes to even address in the space of a book review; it is—to borrow a sentence from the book, “a galaxy of human lives hurtling towards his curiosity.”

the most basic-bitch summary is that it is about “authenticity in the age of social media,” and although it loops back and forth through time, the snake in the garden of it all is Mandala, the brainchild of CEO bix bouton (remember him from goon squad? i don’t, not really!), which offers people the opportunity to externalize and store their consciousness on a cube, preserving their memories so they can be revisited, re-experienced. these can then be uploaded and shared with an online collective, which anyone who has contributed their own thoughts and memories can then view.

that sounds diabolical to me, but i’m barely a whisper online. in egan’s near-future world, people are quite comfortable sharing their innermost, and nearly everyone is plopping the contents of their brains out there for the world to see. of course, even if you don’t opt in, you’re still visible in other people’s memories, in a more invasive form of tagging.

naturally, there are resistors to the whole shebang; and a nonprofit called Mondrian shall lead them—the brainchild of chris salazar, bennie salazar’s son (remember him from goon squad? i do—but barely, and really only because of how excellent his name is), enabling “eluders” to opt out, hiring writers as “proxies” to stand in for an eluder—a whole cottage industry geared towards radical privacy.

book clubs will no doubt enjoy the ‘would you or wouldn’t you’ discussions this book will generate, and it’s certainly a complicated issue. on the plus side:

…tens of thousands of crimes solved; child pornography all but eradicated; Alzheimer’s and dementia sharply reduced by reinfusions of saved healthy consciousness; dying languages preserved and revived; a legion of missing persons found; and a global rise in empathy that accompanied a sharp decline in purist orthodoxies—which, people now knew, having roamed the odd twisting corridors of one another’s minds, had always been hypocritical.

on the downside: loss of privacy, mega-surveillance, shame, knowing what everyone really thinks/thought about you, the disorientation of seeing the most meaningful moments in your life through someone else’s critical filter, and just too too MUCH information. about everything.

she does more than she ought to be able to do with this conceit, given how relatively short the book is—truly, every segment offers up some sort of rabbit-hole meditation to chew over—and i’m just going to briefly touch on a couple of the juciest-to-me parts of her imagined future.

1) the diminished power of language—this is not directly related to the whole mandala v mondrian opposition, and it isn’t a huge part of the book, but it interests me as a heightening of the semantic bleaching already dehydrating language in everyday usage, and a pushback against cliché in creative writing.

It was Athena who first made them aware, in the workshop where Gregory and Dennis met, of word-casings and phrase-casings: gutted language she likened to proxies…”I want words that are still alive, that have a pulse. Hot words, people! Give me the bullet, not the casing—fire it right in my chest. I’ll die gladly for some fresh language.”

She meant their prose, not their conversation, but Gregory and his peers strained for fresh ways to say, in workshop, that a piece of writing was powerful (“coiled,” “obsidian,” “hegemonic”) or flat (“Waxen,” “kerneled,” “Coffee grounds”).

2) fiction’s place in a world teeming with Entertainment, where strangers’ lives and memories can be viewed like movies, lacking any shape or context.

“But knowing everything is too much like knowing nothing; without a story, it’s all just information.”

we need our shepherds.

3) the toll of all of this on human behavior. this is a big one, and of particular fascination to me. she takes a multi-angled approach to it, and if anyone’s looking for a dissertation topic, you could go nuts on it: particularly through the characters of alfred, lincoln, and chris.

the first wink is alfred, who is desperate for authenticity, for [g]enuine human responses rather than the made-up crap we serve each other all day long. the phoniness of television revolted him in early childhood, and it just got worse.

…by age nine, Alfred’s intolerance of fakery had jumped the life/art barrier and entered his everyday world. He’d looked behind the curtain and seen the ways people played themselves, or—more insidiously—versions of themselves they’d cribbed from TV: Harried Mom. Sheepish Dad. Stern Teacher. Encouraging Coach. Alfred would not—could not—tolerate these appropriations.

he wonders: “Why did people have to pretend to be what they already were?”

chris’ job entails creating “algebraizations” of storytelling tropes (Hero Delivers Comeuppance to Perennial Jerk, Blurred Faces Lean Over Protagonist, Gradually Sharpening), and finds this distillation of experiential universalities into data leaching the richness from his own life and flattening the way he interprets his own experiences (Straight Arrow Hijacked by Lawbreaker, Is Unexpectedly Exhilarated).

lincoln is a “counter,” a profession seemingly custom-made for the neurodivergent, using his numerical-compartmentalizing life-slant to develop analytics/metrics to predict, exploit, and monetize human behavior.

the relationship between actual human behavior and the systems designed to analyze these behaviors becomes all kinds of circular and insidious—algorithms and human behavior feeding off each other, reducing humans to traits and character types and expectations, presented as entertainment and regurgitated by performative behavior fulfilling these expectations.

infinite jest is one of my all-time favorite books, and thematically, there’s a lot of overlap between her and david foster wallace: technology, entertainment, addiction, loneliness, projected self v inner life and self-image, truth/history/memory, spies, individuality, and how we can be connected to absolutely everybody and still feel absolutely alone, scrolling through our own staged social media feeds for evidence of our happiness.

it’s a staggeringly strong book and a sharp poke in the eye of modern life and relationships. her prose is clean and bright, her characters are flawed and nuanced, and the book overall is resoundingly empathetic. my powers of articulation are not at their peak right now, but i blathered my best and now it’s up to you to do better. 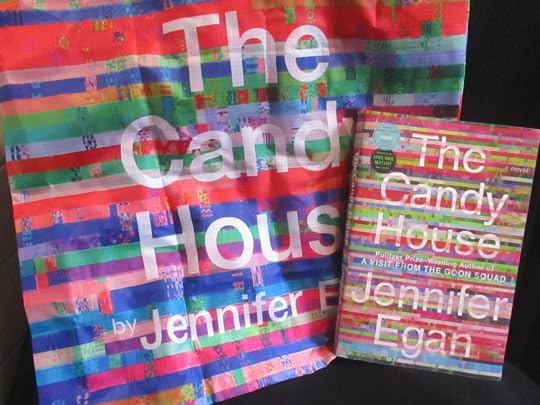 NOW AVAILABLE!! still organizing my thoughts about this book—hopefully i will finish my review tomorrow? for now, apply these words from my DOPE CANDY HOUSE BAG to this space. 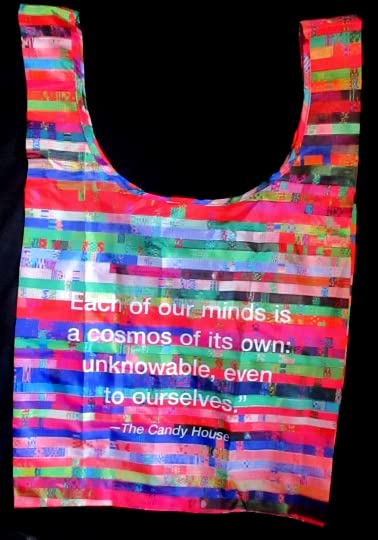 review to come, but WOW WOW WOW—i forgot how good she was.

yeesh, let’s see if i remember enough about A Visit from the Goon Squad to appreciate this one properly!