The Argonauts by Maggie Nelson
My rating: 3/5 cats

this is the opening paragraph of the book:

October, 2007. The Santa Ana winds are shredding the bark off the eucalyptus trees in long white stripes. A friend and I risk the widowmakers by having lunch outside, during which she suggests I tattoo the words HARD TO GET across my knuckles, as a reminder of this pose’s possible fruits. Instead the words I love you come tumbling out of my mouth in an incantation the first time you fuck me in the ass, my face smashed against the cement floor of your dank and charming bachelor pad. You had Molloy by your bedside and a stack of cocks in a shadowy unused shower stall. Does it get any better? What’s your pleasure? you asked, then stuck around for an answer.

and i rolled my eyes.

this is the second paragraph of the book:

Before we met, I had spent a lifetime devoted to Wittgenstein’s idea that the inexpressible is contained – inexpressibly! – in the expressed. This idea gets less air time than his more reverential Whereof one cannot speak thereof one must be silent, but it is, I think, the deeper idea. Its paradox is, quite literally, why I write, or how I feel able to keep writing

and i rolled my eyes.

if you enjoy reading about penetration AND impenetrable abstractions, this here’s your friggin’ peanut butter cup:

for me, this is all like baby pictures stuffed with math. which translates through the karen-filter as “things i recognize as having appeal to others, but make me bored and impatient.” which is how i felt during a lot of this book.

In one of my favorites of your drawings, two Popsicles are talking to each other. One accuses, “You’re more interested in fantasy than reality.” The other responds, “I’m interested in the reality of my fantasy.” Both of the Popsicles are melting off their sticks

but it doesn’t stop her from contributing to that hollowness – examining and probing and dissecting, melting off her own stick.

i’ve always been a bit theory-resistant. i was a wee english major undergrad at NYU, and even then, bright-eyed and bushy-tailed and presumably full of intellectual suppleness, i balked when it came time to play literary theory roulette; reading a single text through a variety of different filters: today we are lacanians! and now feminist theorists! and new historicists! i understand the purpose; to introduce young minds to the exciting possibilities of critical approach, but it always struck me as intellectual busywork, and an incredibly limiting exercise to shoehorn a text into some rigorous discipline, interpreting through such a narrow and frequently inappropriate channel, imposing meaning instead of just listening to what the text itself had to say. fortunately for my gpa, i was very good at bullshitting, but it was never comfortable for me, corsetting a voluptuous book into a narrow vision without regard for authorial intent, and the experience of critical chameleonism reminded me of that scene in Ridicule which i cannot find quoted on the internet, but if you’ve seen the film, you know which one i mean. shallowly parroting someone else’s dogma is way less interesting than finding one’s own voice and critical perception. and that’s what i think of lit theory.

but it could have been worse.

‘cuz shit like this just makes me go into hulk smash mode:

A few years ago, she told me the story of a subsequent feminist theory class that threw a kind of coup. They wanted – in keeping with a long feminist tradition – a different kind of pedagogy than that of sitting around a table with an instructor. They were frustrated by the poststructuralist ethos of her teaching, they were tired of dismantling identities, tired of hearing that the most resistance one could muster in a Foucauldian universe was to work the trap one is inevitably in. So they staged a walkout and held class in a private setting, to which they invited Christina as a guest. When people arrived, Christina told me, a student handed everyone an index card and asked them to write ‘how they identified’ on it, then pin it to their lapel.

i have no issues with the index card element, apart from my antipathy for the spectacle and hippie-dippery undertone at play here – where it’s all just a stagey opportunity to flaunt participants’ tolerance and inclusiveness and commitment to diversity which – if you really are all of those things, you don’t need to broadcast in such a clumsy way. it’s the squirm-equivalent of saying “i have a black friend.” and it’s incredibly superficial – being a lesbian or genderfluid doesn’t make you interesting any more than liking asparagus or being color blind does – it’s a detail of who you are, and if you are only defining yourself by whether the genitals of the people you fuck are innies or outies, you need to aim higher. build a bridge or something.

the thing is, she actually sums up perfectly my own approach to sexuality, before she goes prancing back off into the land of ever-more-granular labeling of sexual expression:

There are people out there who get annoyed at the story that Djuna Barnes, rather than identify as a lesbian, preferred to say that she “just loved Thelma.” Gertrude Stein reputedly made similar claims, albeit not in those exact terms, about Alice. I get why it’s politically maddening, but I’ve also always thought it a little romantic – the romance of letting an individual experience of desire take precedence over a categorical one.

i mean, doesn’t that make the most sense? if we’re acknowledging that sexuality is a spectrum, and adopting the sensible approach of “letting an individual experience of desire take precedence over a categorical one,” why even bother with labeling where you stick your pin on this spectrum? sure, i have idealized aesthetics as far as what i find attractive in both men and women, but my individual experiences of desire have frequently deviated from this aesthetic, because how swoony you feel when you’re around someone you love transcends whether their junk is inside or outside their body, or whether they align with whatever your preferred physical ‘type’ is – tall/short, blonde, asian, whatever.

but as tolerant as i am (although clearly intolerant of hammy displays of tolerance), i have no time for people with identity-dismantling fatigue who are so easily vexed by poststructuralist ethos. i’m too practical to be impressed by empty performance, sound/fury that is ultimately unproductive and noncontributory. and while the author is also made uncomfortable by the students in this anecdote, she is nonetheless devoted to the bombastic argot of the world of gender/feminist/queer theory – all “reproductive futurism” and “sodomitical mother” and intellectualizing her own pregnancy, fretting about the symbolism inherent in being a pregnant woman, specifically a pregnant lesbian; how that defines her in the larger context of the new queer family – if it smacks too much of homonormativity and what it all meeeeans. you’re a lesbian? and you want to have a baby? so maybe just be a lesbian who has a baby and focus on raising your son to be a decent human being full of vitamin C and good grammar without wasting time worrying yourself about the “smug autoeroticism,” the “obscene” nature of “the pregnant body in public” and all the circuitous thought-diddling that should only preoccupy stoners.

Is there something inherently queer about pregnancy itself, insofar as it alters one’s “normal” state, and occasions a radical intimacy with – and radical alienation from – one’s body? How can an experience so profoundly strange and wild and transformative also symbolize or enact the ultimate conformity?

fortunately, the book isn’t all hifalutin’ contemplation; the best parts (for me) revolve around nelson’s relationship with harry, her pronoun-slippery spouse, who is her perfect partner, both sexually:

Why did it take me so long to find someone with whom my perversities were not only compatible, but perfectly matched? Then as now, you spread my legs with your legs and push your cock into me, fill my mouth with your fingers. You pretend to use me, make a theater of heeding only your pleasure while making sure I find mine. Really, though, it’s more than a perfect match, as that implies a kind of stasis. Whereas we’re always moving, shape-shifting. No matter what we do, it always feels dirty without feeling lousy.

and whose pillow-talk (or concrete-floor talk), demonstrates a similar proclivity for passionate balderdash:

In whose world is the morphological imaginary defined as that which is not real?

when nelson is writing about their relationship, particularly the summer of our changing bodies. Me, four months pregnant, you six months on T, it’s lovely – the juxtaposition of their experiences transforming what was formerly abstract into something more tangible and meaningful:

On the surface it may have seemed as though your body was becoming more and more ‘male,’ mine more and more ‘female.’ But that’s not how it felt on the inside. On the inside, we were two human animals undergoing transformations beside each other, bearing each other loose witness. In other words, we were aging.

and, during that same time, living in a hotel after harry’s top surgery and coincidentally coming across a reality program featuring a woman with breast cancer recovering from her own mastectomy:

It was uncanny to watch her performing the same actions we were performing — emptying her drains, waiting patiently for her unbinding — but with opposite emotions. You felt unburdened, euphoric, reborn; the woman on TV feared, wept and grieved.

that is some wholly powerful shit.

and i did enjoy coming across this passage, since it made me feel bad for all my earlier eye-rolling:

Shame-spot: being someone who spoke freely, copiously, and passionately in high school, then arriving in college and realizing I was in danger of becoming one of those people who makes everyone else roll their eyes: there she goes again. It took some time and trouble, but eventually I learned to stop talking, to be (impersonate, really) an observer. This impersonation led me to write an enormous amount in the margins of my notebooks – marginalia I would later mine to make poems.

this writing-in-the-margins habit comes through in the structure of this book – it’s a little indulgent, personal, scattershot and messy, with frequent quotes whose authors are attributed in the margins, and this shape is actually perfect for its subject matter, which frequently addresses the inability to categorize things tidily, including harry:

How to explain – “trans” may work well enough as shorthand, but the quickly developing mainstream narrative it evokes (“born in the wrong body,” necessitating an orthopedic pilgrimage between two fixed destinations) is useless for some – but partially, or even profoundly, useful for others? That for some, “transitioning” may mean leaving one gender entirely behind, while for others – like Harry, who is happy to identify as a butch on T – it doesn’t? I’m not on my way anywhere, Harry sometimes tells inquirers. How to explain, in a culture frantic for resolution, that sometimes the shit stays messy?

and i think that’s the main takeaway for me – sometimes shit stays messy, no matter how many labels you throw at it, no matter how much time you spend spinning your thinking-wheels. the difference between her conclusion and mine is that shit staying messy is my endpoint, not an invitation to throw more scrabble-words at the situation. 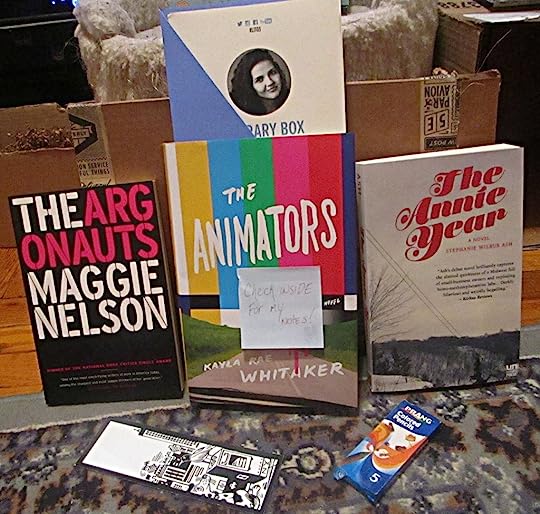 the second book in my second literary subscription box from quarterly. huzzah!