since joel is being a slowpoke, i am going to write this review before i forget everything i was/am thinking about it and it gets lost in too-many-books-past.

yeah, so i had no idea this book was about vampires.

but, karen, you have voted for both elizabeth and mariel’s review of this book, surely you read reviews before you vote!! surely you don’t just “insta-vote” and RUIN goodreads.com for the rest of us???

to be fair, i did read elizabeth’s review but it was ages ago, when i had no intention of ever reading this book, so i just enjoyed her writing without absorbing the details, and the book itself went “whhhooosshh” outta my brain. and mariel. well, mariel is a very special brand of reviewer, and i think she only said “vampire” one time in her very convoluted but awesome review.

i mixed this up in my head with the other fantasy books i have been commanded to read, and i thought this was another beauty and the beast retelling. imagine my confusion when the vampires showed up to crash the party. and i liked it, but i did not get out of it what everyone else seems to have gotten from it. this is like a seminal work to the fantasy-lovers and they swoon when it is mentioned.

so what am i missing??

this is intended as a genuine question because i have never read/seen any of it, but is this what true blood is like?? this is the sense i get—southern location, accepted and casual reactions to the supernatural mingling with humankind, central woman straddling two worlds and looking good doing it. is this a fair assessment?? i am just curious if this book was an inspiration to a young(er) charlaine harris, or if this is just a common theme in fantasy novels.

so i am going to talk about genre fiction briefly, as someone who does not read much genre fiction, because i just have some questions/observations. and you will correct me if i am totally off base.

fantasy novels, including this one, seem to revolve around a strong central female character and several “helper” male characters who don’t have much power, but work to protect or nurture the female. in this book, she does have a boyfriend, but he is more symbolic, like something for her to rub her sexuality against. he can physically protect her with his might, but he is really only there to give her what she needs and not ask unpleasant questions, fading into the background so she can View Spoiler »have guilt-free near-relations with supernatural beings. « Hide Spoiler and she pretty much does see him as a means to an end, as she freely confesses. she is glad that he doesn’t ask her the questions (which, considering what is going on all around her, and the behavioral and physical changes that are happening to her, would be pretty natural for him to ask) but she sees his presence as comforting and his “respect” for her emotional reticence as a mark in his favor. he is the comfiest of sweaters (the garment), but no one has a conversation with a sweater.

(this is totally different from high or epic fantasy, which i gather is pretty misogynistic and rapey.)

now, if this was a romance novel, the characters’ dynamics would be all different. in romance novels, (the few i have read) women seem to give up all their agency to be swept away by something larger than themselves, they wouldn’t be taking charge and we all know what happens when a woman meets a vampire in a romance novel. 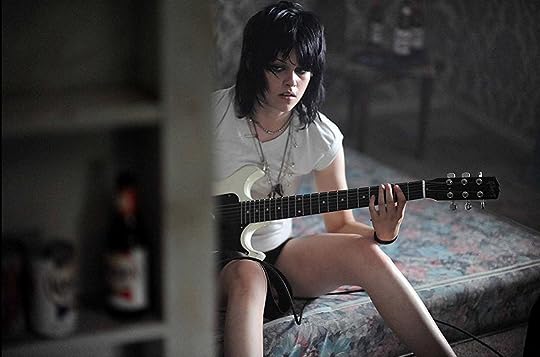 she becomes a lesbian rock star, of course…

but the sentences were kind of killing me:

My mother, who would have loved to forbid these visits—when Mom goes off someone, she goes off comprehensively, and when she went off my dad she went off his entire family, excepting me, whom she equally passionately demanded to keep—didn’t, but the result of her not-very-successfully restrained unease and disapproval made those trips out to the lake more of an adventure than they might otherwise have been, at least in the beginning.

The Cinnamon Roll Queen wasn’t going to be bought off by a fast food hamburger—supposing I ate hamburgers, which I didn’t, and after tonight, even if I had, id’ve given them up—but Prime Time was a twenty-four-hour gourmet deli.

aggg—it makes me exhausted unpacking those sentences. it shouldn’t take this much rereading to make sense of a vampire novel, should it?other than that—i did enjoy all of the baking. i have some questions about the nature of sunshine’s talents, and how with her work schedule, she would ever ever see the daylight, and View Spoiler »i was very disappointed to have been royally teased with all this talk of her paternal grandmother and her badass dad, and they don’t show up in any significant way?? come on!! i need sorcerers!! so unfair! « Hide Spoiler

awesome librarian character a plus…

not really a review, but some things that have been bouncing around in my head since i finished this like 8 books ago. i blame joel!! joel is the problem with goodreads.com!