Slice Harvester: A Memoir in Pizza by Colin Atrophy Hagendorf
My rating: 4/5 cats

this is one of those books that feels like you are hanging out with its author engaged in one of those meandering first-date conversations where you’re having a good time, and excited about having a good time and sharing every fun anecdote you have in your arsenal and enjoying the company of a like-minded individual. the author is completely unaware of my side of the conversation we had while i was reading his book, and that’s fine, but it was indeed a conversation. because we mourn the loss of the same things: st. marks pizza, coney island high, st marks in general. and we both enjoy food-projects – while not pizza-specific, i have my weekly “adventures in food and fun” where i drag greg all over new york to eat food, so i appreciate reading about someone else’s commitment to new york eats, especially a project as daunting as this: to eat a slice from every pizzeria in new york city.

because there is A LOT of pizza in new york. in fact, the 435 slices he had, while staggering, actually seems low. you can walk down a block and pass three pizza places and think nothing of it. it’s the visual equivalent of white noise. pizza is easy to make, it’s inexpensive, and it’s the fantastic drunk 4 am food when you know you should eat something but you don’t have time to slow down. (i mean, from what i remember. old people don’t do 4 am drunks) but and here’s the thing – for a city that is generally known for its pizza (pipe down, chicago!) and for the omnipresence of the pizzeria, a lot of it is just … shitty. it’s nonfood – something you eat just to fill you up a little – the 5 dollar handjob of food that you instantly forget having eaten. so i commend him on his quest because he learned this lesson the hard way.

but this book is not a tell-all of his experiences. it’s not a collection of pizza reviews and it’s not quite a memoir – there’s no real shape to his stories. but it’s entertaining and filled with his tales of drunkenness and the punk scene and people he knows* and ether he’s huffed, how he got his couch, and making soup for his sick girlfriend garnished with a few wayward cat hairs, like most meals in my house. same here, man. it’s a hodgepodge of his stories of innocence and experience loosely structured by his slice harvesting mission. worth noting is his first teenaged foray into trash and vaudeville which is this totally cheesy fashionpunk store on st. marks – it’s kind of like what hot topic used to be for suburban kids and it is one of the very few things on that block that is still there somehow. but his wide-eyed adoration of it: As we left, I made a mental note to get my whole wardrobe from this place as soon as I was a grown-up is utterly charming.

i do wish there had been more about the pizza. i mean, there’s plenty, but i could have done with some addresses and more of his hilarious assessments of what he encountered inside, my favorite of which is:

The pockmarked texture of the burnt cheese reminded me of James Woods’s grimacing visage as he masturbated his new belly-vagina with a pistol in Videodrome.

i mean, a-plus for the reference. and he later references the stuff, which is one of my all-time faves, and when he gets the opportunity to eat pizza with phoebe cates and her daughter, his touchpoint is drop dead fred, which is absolutely the correct answer to “best phoebe cates movie ever.”

some of his other critiques:

—It’s not that the cheese didn’t have a taste so much as it had an antitaste. It tasted of lack of absence.

—I’m glad we ate it, because if we hadn’t, we’d be left to wonder how bad a slice of pizza could truly be.

overall, it’s a sweet story about a punk kid with an appreciation for kris kristofferson and slick rick growing up and finding love and getting sober, growing out of zines and into the blogosphere, looking back on his life’s journey which, like the pizzerias of new york, contains some shitty slices but also some shining stars that make the shit worth it.

i’m going to include this medium-long excerpt, because it is perfect and very DFW-ish in its cadence and his passion for pizza is powerful, contagious stuff:

Feelings that are similar to eating magic pizza: when music perfectly matches the weather or your mood (Billie Holiday on a trembly tape deck when it’s rainy; Cam’ron out a car window at the beginning of summer, drinking a beer on a stoop with your pals with Three Headcoatees on the jambox, Lee Moses on spring evenings, etc.); the sense of relief and/or exultation felt when you’ve been having an ambiguous “not a date but not not a date” hangout with someone you’ve been crushing on and tension has been mounting all day, and then you finally hold hands or have some other affirmation that The Feeling Is Mutual; finding a rare record or book or stamp or baseball card or shirt or coin or whatever the fuck you collect in a thrift store or at a garage sale or whatever; when you look so sharp right after a haircut and you got on your new black jeans that fit just right and you know you’re going to be the flyest person in whatever space you’ll be in for at least the next couple of hours, if not the next few days. What these disparate moments share is the feeling of everything falling into place, the feeling that regardless of all the external bummers of day-to-day living, things are at least momentarily going your way; the fates are smiling down on you. Maybe your feelings aren’t the same as mine; maybe for you eating a perfect slice feels like stealing home in your softball league, your kid getting straight As, or slam-dunking the Henderson account. You get the point, though. The right slice makes it all feel okay.

warning – this book will make you really crave pizza. have some nearby.

* including aaron cometbus who does indeed have stupid long arms that i am still mad at because one sometimes you are at the housing works open air book fair or something and these loooong octopus arms will just snaffle up all the books you are trying to grab with your regular-sized person arms and you NEVER GET OVER IT. 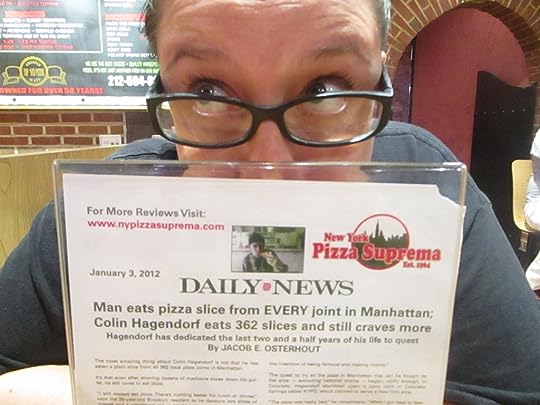 okay, review to come and all, but i just wanted to say THANK YOU, mr. hagendorf, for letting me know that pizza suprema is the closest thing i will ever get to my much-beloved, much-missed st. marks pizza. the day after i finished this book, i ran right out to test pizza suprema’s eggplant slice, which was my every-day treat back when i lived/worked near st. marks pizza. and it was damn good. 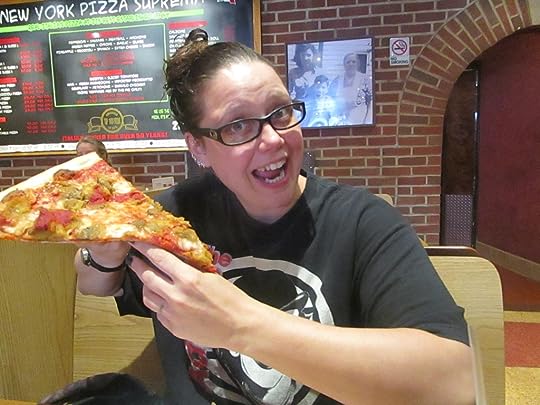 proper review to come, but i just wanted to celebrate being led to excellent pizza in a city of mediocre pizzas.

Congrats – you are a First Reads winner!