is the poetry contained here in every way more ambitious, mellifluous and meaningful/capable of inspiring emotion than some poets who shall remain nameless but who are paying their rent with their shitty poetry?

i think the framing of that question itself serves as an answer.

Looking towards Greenwich,
Towards that great confluence of sky and river,
Thames and Tower,
On misty mornings when Westminster rises
In this pearl-gray hour;
Had you been strolling on the Embankment then,
You would not have looked up towards Scotland Yard,
Its windows silvering in the sun,
And thought: Murder is abroad.
No, you would not have known
The blind man coming towards you in these waves
Of Londoners, his white stick tapping
The ground like a divining rod, is looking
Over his shoulder at you.

this book may not be perfect, and it’s not the easiest to follow at times, but it gets that fourth star cat because it’s pretty damn rad that an established mystery author decided to write a mystery as a series of poems. i applaud people who like to shake things up.

this takes place in a town full of weirdos—it feels a bit like it’s set in some edward gorey-town, to which the enigmatic bygraves is summoned to solve a crime which will become a series of crimes. bygraves is a cipher who communicates his findings in unusual ways, as these chapter titles illustrate:

a note from Bygraves found under a malt vinegar jug

the poem-chapters take many forms—some are long, some only a few lines; some rhyme, some are free verse, and then you get to the middle of the book and there’s a parade of poetic form-chapters, all incorporating the word murrrrderrrr in their titles:

and all adhering to the rules of those forms.

‘cuz poems have rules, tumblr-poets, and that’s part of the challenge, part of the fun, and part of the honor of being a damn poet.

(although The Bygraves Sestina is not a true sestina. but no quibbles from me: i had to write a sestina in undergrad and it was a pain in the ass. so was the villanelle. this is why i am not a poet.)

so, yeah—it’s confusing as hell, this book, and it’s not always clear what’s really happening—there are shifts and a playfulness with reality, but most questions are answered, if you dig a little and infer a lot.

as this mostly-well-rhymed poem promises, the process of investigation will lead to enlightenment:

Mystery. It’s all the same
Questions without end or aim.

What will lead us to the dead?
Footprints in the flower bed.

What appeals were made too late?
Sift the ashes in the grate.

What was fatal in this mug?
Pick the fragments from the rug.

What has tolled the final knell?
Find the sexton and the bell.

What heart has become too fond?
Cast the net across the pond.

What act was misunderstood?
Take the footpath to the wood.

What mind has succumbed to grief?
Search the rocks beneath the cliff.

What was buried in the sand?
Shine the lantern down the strand.

Clues that lie as scattered as
The blown leaves across our paths.

Sinlence, speak. Wind, unwind.
Everything will be explained.

and for those of you who remember the dreadful booktheft by one sean patterson, THIS is what you want to see when you have an old library book in your home when you are not, in fact, a library: 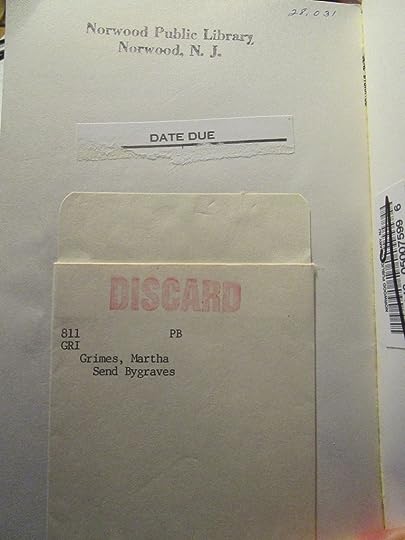