there is a 1,000 kilometer horse race in mongolia called the mongol derby with the reputation of being “the world’s longest, toughest horse race.” human riders mount a series of 25 wild ponies, swapping ‘em out every 40 kilometers “to ensure the endurance [falls] on the humans, not the horses.” participants train rigorously, obtain sponsorships to offset the enormous entrance fees, prepare themselves for the physical and psychological hardships of being on horseback for more than a week; through the heat and the rain and the aches and exhaustion of what is a frequently solitary trek over mongolia’s unforgiving terrain. despite all these preparatory measures, many riders do not make it to the finish line due to illness, injury, or fatigue. long story short – attempting this race requires commitment, dedication and sacrifice.

or, you know, you could just sorta wing it.

this is a memoir written by the nineteen-year-old woman who entered the derby on a whim, prepared not at all; didn’t train, didn’t get the required vaccinations, didn’t even bring a change of pants and somehow not only won the race, but was both the youngest and also the first female to ever win.

and this book is how a person like that writes a memoir, or an account of this race. it’s not quite either of these approaches; it’s a little flighty, a little flitty — it’s where that kind of mind goes when it’s largely unoccupied and let off its tether for long solitary hours. the book is full of sentences like this: Why do humans put so much thought into some decisions yet plunge into others like cavalier penguins? Are we met with a sudden urge to avoid the direct path to middle age and subsequent visions of growing old in a lonely world of cats?

parts of this book feel like the script for some “girls can be forrest gump, too!” sequel — not because the author is slow, but because of how unlikely her even finishing the race was, considering her level of preparedness — I had never ridden more than 20 kilometers at once, let alone with a GPS, and, as established, I didn’t know how to use one anyway. not only did she enter on a whim, she entered after the deadline had passed, didn’t read much of the fine print, only half-filled out the medical forms and yet at every turn, logic looked the other way, fortune was feeling generous, and history was made by someone who forgot to take the pills that would stop her period and wound up bleeding all over her pony.

despite embodying (and playing up a little, i suspect) the whole ‘god watches over drunks and fools’ angle — Wolves, snakes, and mountain lions can’t eat me because I’m not yet aware they roam these parts, she’s a little more savvy than some simpleton chasing a balloon; she manages to talk her way into paying less than half of the entrance fee, cadge gear off of fellow riders, and she’s got a deeply-ingrained competitive streak, so despite her somewhat-cultivated veneer of padded innocence:

I didn’t think about rain, so I don’t have a change of clothes. No pajamas. No second pair of jodhpurs. Just a spare pair of socks and a pair of knickers. “Oh dear, I’m going to have to sleep naked.”

It wasn’t necessary for me to say that aloud, but I don’t think anyone noticed.

there’s a flint of steely stubbornness at her core.

still, every single thing about her involvement in this race is haphazard – she remembers to bring some medicine, but removes the pills from their packets “in a fit of boredom,” flinging them altogether in one bag so she doesn’t know which are antibiotics and which are water purifying pills and which are ibuprofen, etc, so she just swallows whatever’s on top and hopes for the best.

I got entangled in my backpack first thing the next morning, which required the rescue of three crew members…

it’s a fun rompy read, but if you are looking for a book about the history of the race, or a book of sports writing, or one getting to the core of what makes a champion athlete tick, this might not deliver that for you. it’s a hodgepodge rummage sale memoir-daydream that is weird and fun and that was enough for me and maybe it will be enough for you! 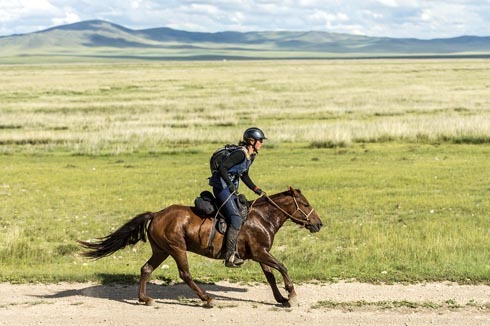