Riot Most Uncouth: A Lord Byron Mystery by Daniel Friedman
My rating: 4/5 cats

The old dons had provided me a humble three-legged stool to squat upon in the near darkness. The entire arrangement seemed orchestrated to make me feel small. Their plan had failed, however. Marble floors and Corinthian columns had no capacity to intimidate me, and I was not the sort of subservient youth who would prostrate himself before anyone with sallow flesh, colorless lips, and a craggy countenance. I was Lord Byron, and I could expand to fill any space.

i was reading this book all cozy curled-up on my bed, and by page 40 i’d already giggled audibly about 16 times. sean of the house asked what was so funny, and i explained that it was a book about byron and his pet bear and a series of murrrrderrrrrs.

me: yes! when he was at trinity, they had a no-dog policy, but there wasn’t any no-bear policy on the books, so – pet bear.

oh, and then it was on, friends, and there was passionate lecturing and hand-flailing and frowning, and my closing arguments were something like, yeah – if byron were around and doing all these things now, he’d be pretty douchey. but back in 1805? fucking rockstar.

drinking red wine out of a goblet made from a human skull?

in 2016, in hackensack, when you buy it from hot topic, that’s pretty douchey.

in 1805, when you find the skull on the property of your own crumbling inherited estate and commission artisans to transform it for you and then write a freaking poem about it that you recite during your drunken parties … okay, so it’s a little douchey, but also still fucking rockstar!

basically byron gets a pass because he was the first to do a lot of douchey things and he’s the o.g. of goth and punk and emo. 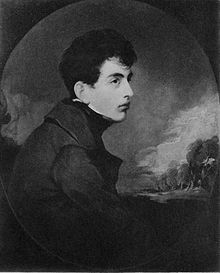 as long as you forget about this lounge-act period of his life, when he was the o.g. of dirtstache and co-opting albanian culture. 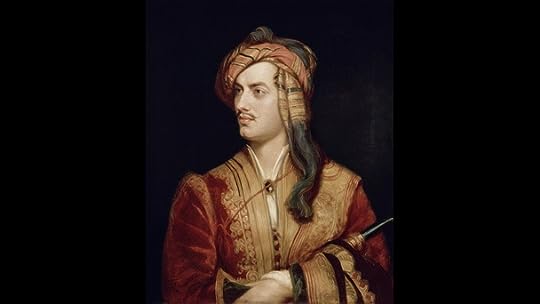 i’ve read a lot of novels in which byron is a character. it’s one of my interests. and they’re rarely well-researched or thoughtful, and what you get is this half-assed child’s-drawing version of byron, all emo-sighs and coarseness and exaggerated villainy and swagger. and it’s not like those aren’t elements making up byron, or at least of the mythology of byron, as he himself points out:

I am so changeable, being everything by turns and nothing long – I am such a strange mélange of good and evil, that it would be difficult to describe me.

but most authors miss one major characteristic: they never make him funny. if you’ve ever read his letters, you know byron was terrifically funny; whether he’s being languid and self-deprecating, or acerbic and pointed, or in one of his juvenile scatological or otherwise vulgar moods. this book occasionally veers a bit into oscar wilde territory, but i can forgive a lot if something’s funny enough, and this one gave me some serious giggles at the outset.

unfortunately, after i had to pause in my reading to berate sean of the house for his foolishness, the book never made me laugh aloud again. so maybe it’s just the beginning that’s funny, or maybe sean ruined my reading experience and now owes me many apologies in the form of cookies.

whatever the reason, i still really enjoyed this book and i frequently laughed in my head, if not aloud. and for those of you who want the gloomy-doomy byronic outlook, there’s still plenty of that here:

Women feel the heat and see the light, and they recognize that love is a kind of flame. But they don’t know which kind. They think love is a votive candle, and it isn’t. Love is a wildfire. It’s bigger than they comprehend, and more chaotic. It dances against the sky and sucks all the moisture from the air and earth, and leaves everything charred and desiccated. Love doesn’t redeem. Love consumes.

and it also features all the naughty womanizing that’s a big part of the byronic hero:

“I couldn’t stay away. You’re so beautiful.” I moved my face close to her neck and took in the scent of her skin and her hair. “Why do men always tell girls that they’re pretty?” she said. “Why don’t you ever say a woman is bright or talented or witty?” “We do say that,” I said. “We say it all the time. To the ugly girls. We tell them they have charming personalities and remarkable senses of humor, and we avoid looking directly at them; we fix our gaze on a point behind them, or off someplace to the side, to see if a prettier one is just beyond the periphery of our vision.”

which is shallow and misogynistic and all of that, but his daughter did write the first computer program, so he contributed to the sisterhood in his own way.

but the point is that this book does all the things those lazy authors do, but also remembers to bring the humor. which i applaud heartily.

the basic premise: when a young woman is murdered, nineteen-year-old lord byron takes time off from his busy schedule of drinking, cuckolding husbands, writing poems, dodging creditors, and skipping class to investigate the murder, frequently accompanied by his pet bear.

his reasoning is that:

A poet must have a keen eye for details and for feelings; for subtext and for innuendo. This same set of skills is also essential if one hopes to have any success at the pursuit and capture of murderers. The 1807 publication of Hours of Idleness, my first collection of verses, cemented my reputation as the greatest poet ever to have lived. It therefore stood to reason that I also was the world’s greatest criminal investigator. 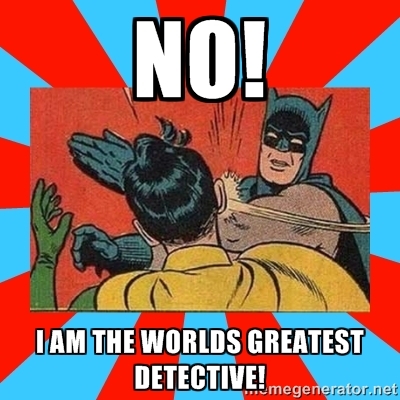 byron never loses his confidence in his abilities as a detective, despite his clear lack of aptitude or sobriety or even permission: …”I’ve found that if I behave as though rules do not apply to me, then they usually don’t.” but then there are mooooore murrrrderrrsss, byron’s theories take a supernatural turn, his daddy issues start to resurface, and he is a raw nerve of anxiety, which he occasionally uses to try to get some:

“I have seen terrible things today. Mangled corpses and murdered children. I am distraught, and I am seeking solace,” I said. “I believe I misplaced some between your bosoms.”

and of course, his eccentricities make him a target for suspicion by the actual investigators.

I leaned back against the velvet upholstery of the big chair. “Surely, you don’t think I killed the girl?”

“You’re as good a suspect as any. People tell me you made a crass and explicit sexual proposition to Felicity a couple of months ago, and responded with anger when she rejected you. Is that true?”

I rubbed my fingers across a carved armrest. “I don’t recall.”

“Lying to me is a futile enterprise, Lord Byron. I’m difficult to deceive, and I’m smarter than you.”

I shifted my weight, and crossed my legs in what I thought was a rakish manner. “No, I mean, that probably happened. But I don’t recall. I make crass sexual advances toward almost every woman I encounter, you see. Usually, when I’ve had a lot to drink.”

“You’re often drunk?” His eyebrow arched, stretching that long, wicked scar as he regarded me with distaste.

I shook my finger at him. “I’m drunk right now, as it happens.”

“It’s the middle of the afternoon, on a Tuesday.”

“Time is of little concern to me. I haven’t slept in days.” For some reason, I was proud of this. “May I offer you some whiskey?”

“Certainly not.” The furrows beneath his cheeks seemed to deepen.

“Very good.” I produced a silver flask from my waistcoat pocket and tipped it back. “More for me.”

i mean, what’s not to love here? it’s bloody and bawdy and funny and it’s so much better than 80% of the books i have read featuring some lopsided version of byron with zero chuckles. (the remaining 20% is pretty much just The Stress of Her Regard. i am horrible at math.) if this decides to become a series, i will continue reading it with pleasure.