Queen of the Conquered by Kacen Callender
My rating: 3/5 cats

i showed up early to a book reading/signing last week, and once i had settled comfortably into my seat, i took this book out of my bag and started reading. the woman next to me noticed the cover and exclaimed that she had just finished it herself and loved it, enthusiastically praising its merits.

this is that kind of book. the people who love it are going to gush about it; chatting up strangers, recommending it to friends, gift-wrapping it for family members. me, i’m the jerk who can’t keep my mouth shut and just nod along when a very sweet lady—a fellow book-nerd—is so passionate about a book that she assumes everyone loves it as much as she did, and i gotta go and deflate her squee-bubble with my honest-but-mood-killing, “yeah, i’m halfway through and i’m still trying to get into it…”

before i dig in, i will say that the ‘turn’ in this caught me completely off-guard in the best possible way; a perfectly ‘fair play’ resolution to the mystery that i did not see coming, but was so satisfying a solution that i thought it was going to be one of those books with such a strong ending that it would redeem the so-so feelings i’d had up until that point. but no; the ending is more like a baton-pass or a hot potato, which wouldn’t ordinarily bother me, if i’d been enjoying the book, but in this case it made me feel like shouting “WHY IS THIS MY RESPONSIBILITY??”

still, for a third-act chunk of it, i was so hooked.

there’s so much “almost” here—so much i almost like, and now that i’ve finished it, i wish i could sit down with that nice lady from the reading and hash it all out with her. instead, i’ll just type words here by myself. sniff.

first things first—i read an ARC of this, and it’s an ARC that—one hopes—was going to have another editorial go-round before publication; it’s got all sorts of distracting typos and misused words, and that’s fine—that’s pretty much expected in an ARC, and my brain will overwrite the errors as it reads, but there’re* also some less-cosmetic issues that bugged me—inconsistencies and repetitions and stylistic awkwardness, and it’s hard to know if this is ‘fix it in post’ ARC-roughness that’ll be smoothed and tightened in the final book, or if i’m just not keen on the author’s storytelling choices.

this is a fantasy-slant on scandinavian colonialism in the caribbean, in a world where certain individuals are born with magical abilities known as ‘kraft.’ here, the collectively—named ‘islanders’ have been enslaved by the fjern, subjected to all the brutality and indignities of historical slavery, as well as the authorized execution of any islander found to have kraft, which is considered too dangerous a weapon for the oppressed to have. only one of the many islands making up the nation of hans lollik is held by an islander—one sigourney lund, who was born sigourney rose, daughter of a noble family who were all massacred when she was a little girl. she escaped, but was presumed dead, and has been in hiding ever since, plotting to avenge her family, take the throne for her people, and then free her slaves along with all of the others. she is also the only islander (reluctantly) permitted to have kraft, which in her manifests as the ability to read minds. using her power to manipulate those around her, not above a little light murder, she manages to arrange her marriage to a fjerd whose family is one of the kongelig—noble families and advisors to the king, who has summoned the kongelig to his island for the storm season, at the end of which he will choose his successor from their number.

this number of contenders gets smaller and smaller as the kongelig begin to die mysteriously during their time on the island, and, although she does not mind that her competition is being eliminated—these pale-skinned monsters responsible for her family’s death—sigourney begins to suspect all is not as it seems with the king, the kongelig, the whole situation.

the premise is excellent; the outline of the story is great, if you were to bullet-point it all out, but the difficulty for me as a reader is in the delivery; the mode of storytelling.

i wholeheartedly applaud callender’s decision to make sigourney an unsympathetic protagonist, which was entirely successful. she is not well-liked—certainly not by the fjerd, who despise her on racial grounds, but also by her own people, who see her as a race-traitor for not freeing her own slaves. for both of these reasons, she also hates herself, which readers are told again and again throughout the novel. her big plan is to take the throne, free her people, and be seen as some savior, but she’s unwilling to free her own slaves until she achieves this goal because—she reasons—she needs them in order to get the throne in the first place; to be seen as an equal to the fjern, whose respect she craves even as she despises them, thinking that playing the game by their rules is the only way to win. she consoles herself with the fact that she doesn’t beat or execute her slaves (much), and she’s really doing all of this for her people and they’ll thank her for it later. all of which is wildly self-delusional, which her people recognize even if she can’t—the fjern will never consider her an equal because that’s how racism works, her people will never forgive her for owning them, and she’s really only out for her own power and status. she’s selfish and entitled and so fortunate to be free, she’s no different than the kongelig—believing that she knows what’s best for the islanders and making decisions for them accordingly.

What have I done for this boy—for any of the slaves of Hans Lollik—to hate me the way that they do? Shouldn’t they be glad, to see one of their own free and among the kongelig, to potentially gain the power to release us all from the Fjern? I’ve sacrificed myself for this—my freedom, my peace, potentially my life—and rather than meeting me with thanks and love, I’m met with such hatred.

it’s a bold move on the author’s part, making the protagonist so very much part of the problem, so complicit in the power structures keeping her own people down, so superficially conflicted, morally, about bedding her slaves when she feels the need for physical attentions. i prefer a complex, ethically-challenged character to one who’s squeaky-clean and flat (like beata larsen, the true-love of sigourney’s new husband), and i could have put up with sigourney’s constant stream of shame and self-loathing if she’d demonstrated some of the ambition and ferocity that got her to this part of her journey, but once she gets to the island, once her goal is in sight, she just…stalls. she obeys the king’s orders and submits to the other kongelig’s demands, even when she doesn’t agree with them, but when it comes to furthering her own agenda, she slows her roll, earning her an admonishment from her ally and confidante marieke, the only slave she’s ever freed:

“You should have patience, yes—but not to the point that you miss your opportunity.”

for someone who wants to rule the world, she sure isn’t enterprising. she discovers things and then just sorta waits around to see what will happen next, like there aren’t bodies dropping all around her and everyone hates her and she could be next. she’s inflexible; sticking to her plan, unable or unwilling to act on new information/adapt to new circumstances even when it becomes clear that she needs to adjust her approach.

for someone who can read minds, she sure can’t read a room. or understand people. or—most unforgivably—tell a story.

and here’s where i finally address my biggest complaint with the book (“it’s about time!” exclaims the one person still reading this review)

this book is written as one info-dump after another, as sigourney reads people’s minds and turns it into pages of exposition, which makes for such a dull and uninflected reading experience. when there’s dialogue, yay! when there’s action, bigger yay! but pages of first person present tense regurgitation of what people are thinking and feeling, recounting their memories and motivations, is just so limiting. it’s a slog to get through. least, it was for me.

anyway, there it is. there’s a lot in this book that i appreciated, and there were scenes that i liked, and a moment where i thought it could be love, but the writing style was difficult for me to get into, so as excellent as the excellent parts truly were, the first 3/4 of it was stylistically exhausting, and i could not recover, even though i so badly wanted to.

* i’m also curious whether the author’s insistence that “there’re” is a word will pass the gate. where are we on this? it’s not something i’ve seen before outside of phonetic dialogue, and they used it a lot and it stabbed me in the eye every time. i am blaming the overuse of the word “there’re” for this bloodblob that appeared in my eye last week—when i was reading this book—and i only just now, when complaining about this word, made the causal connection. 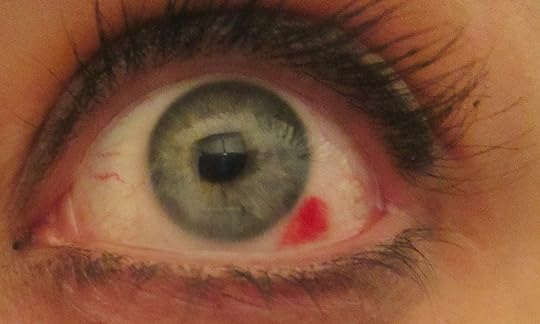 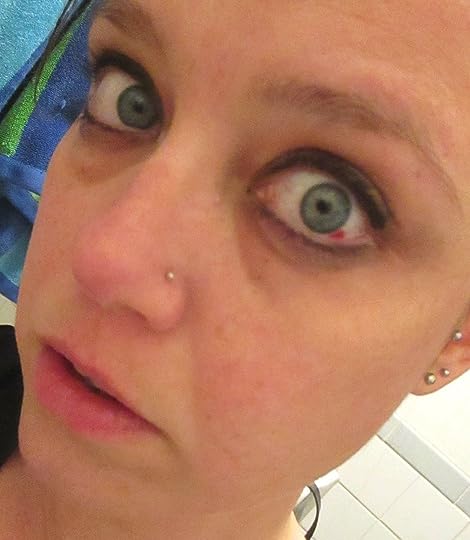 pause for now. fifty pages in and it’s not grabbing me yet, or i’m not *getting* it yet, but the writing style is uneven and the too-many typos in the ARC are distracting and i have too much to read right now to handle a slow-pacer, so imma zoom through some less-demanding books and circle back, maybe continuing with a finished copy.