PornBurger: The Cookbook by Mathew Ramsey
My rating: 5/5 cats

finally, here is the review with all the full-color pictures i promised so long ago! and i am giving this the full five stars cats now because the finished book has even MORE recipes and droolworthy pictures than the ARC, which i am going to hold on to so i can cook from it without smearing the inevitable smearable stuff all over this beautiful book. so, enjoy the colorful splendor of heart attack city!

this book is probably what’s going to kill me. 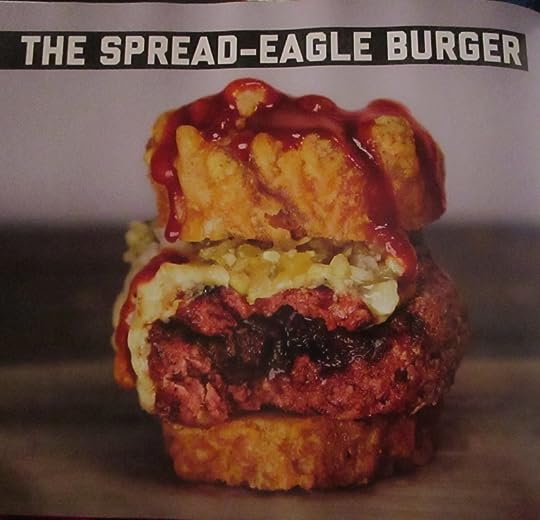 these recipes appeal to my own personal food pyramid, which is stocked primarily with comfort foods like cheese and bacon and peanut butter and various things that have been fried. it also appeals to the me who was an incredible stoner-hostess back in high school and college where i would invite like-minded marijuana enthusiasts over and while they enjoyed a fulfilling post-smoke conversation, board or video game, or terrible movie, i would excuse myself to the kitchen and let my munchie-imagination guide me, assembling platters of treats startling in both their flavor profiles and their physical construction. if i’d had this book back then, everyone would have gout by now.

there’s definitely a similar mentality at work here, and the recipes are a combination of inspired genius and culinary chops. on the one hand, it’s very laissez-faire stoner food. on the other, there’s a 3-page spread about how he makes his burger patties, which involves three different cuts of meat, more than one pass through his personal meat grinder at different “dyes” (which apparently refer to the size of the grindy-hole), and conversations with butchers about cow-things and ain’t none of that fits into my life.

fortunately, for all most of the above character flaws, he offers a workaround for faking it; divulging tips on pseudo-viding (which is a word i just made up and you may steal) and stovetop smoking for commoners like me (sadly, there’s no way to fake a waffle iron). and he’s very cool about acknowledging that not everyone has the same devotion to burger-making as he does, and that he’s just offering up his process for people more ambitious/wealthy/blessed with kitchen space for multiple appliances than i am.

so why, if i don’t want to go through all the rigamarole of grinding my own meat, am i so excited about this book?

well, it’s partly because this book is indeed straight-up foodporn, and i take pleasure in gazing and drooling with quickened heartbeat at recipes like the melon monroe: 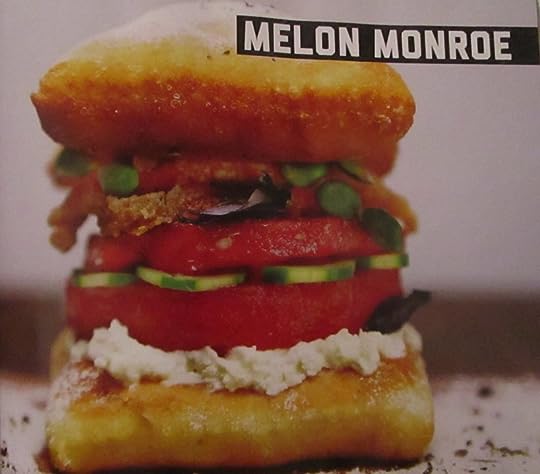 which sounds like a divine, but also really weird combination of competing taste sensations:

but let’s be honest – even with his helpful shortcut to stovetop smoking tips, i know i’ll never make that compressed watermelon patty because i lack moxie.

the book opens with a series of pages showcasing ramsey’s “burger stacks,” which involve twice-ground burgers, sure, but also so much more. each page offers a photo of his signature creations and lists what’s in ’em from top to bottom. the recipes for all the components are in the back, and he encourages a “choose-your-own-adventure” mix n’ match approach to burgering.

here’s one of his: 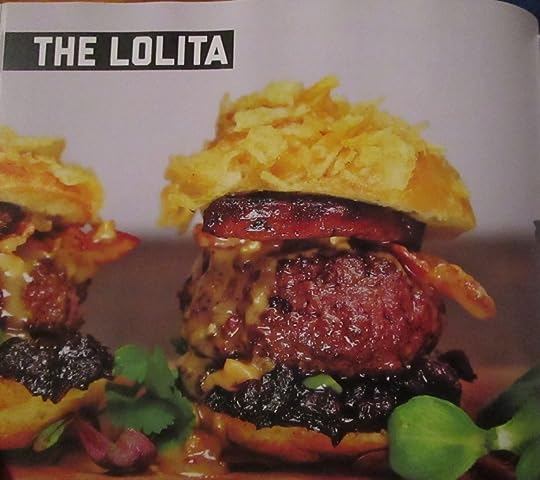 oh my god, right? don’t you want to know how to make every single thing in that burger stack?
because i do. 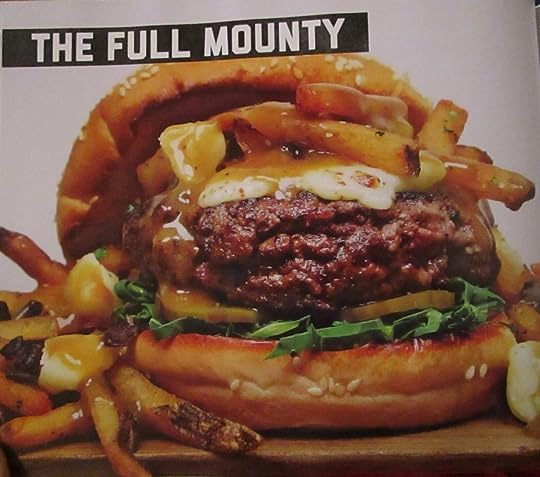 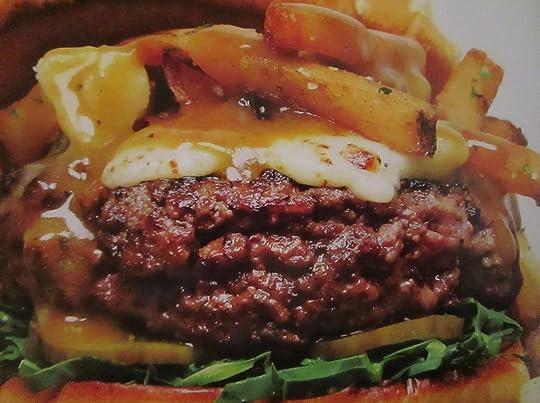 so, basically there are manymany things i want to make right now. here is a list:

kill me now because this is what heaven is made of.

there is also the truffled sausage gravy which looks amaaaaaazing and since it “makes an obscene amount of gravy” (which, for the record, i do not consider one quart to be SO obscene), there might be enough to share with greg!

it’s hard to resist a gravy that comes with this testimonial:

I’ve been known to eat it cold out of the refrigerator, with a spoon. Have a pillow and blanket within arm’s reach. There will be naps.

even the kalamata olive/onion confit and cherry cake sounds delicious and makes me wish olives weren’t so gross.

apart from all the (potential) deliciousness, since i haven’t actually made anything from this yet, i also appreciate the layout and writing style. it’s much less fussy than a lot of cookbooks i have read; the tone is chatty, full of terrible puns and suggestive language, and the burgers all have names like “harissa tomei” or “inglorious basquered” or “porknado.”

i enjoy that the making of burger patties is compared to the pottery scene in Ghost.

i enjoy the honesty of his notes, as in the recipe for candied prosciutto: when I need 4 slices for a burger stack, I always make one extra for snacking.

because OF COURSE there will be snacking, duh.

i enjoy that he sometimes calls his burgers “dudes.”
or a “boner of a burger.”
or a “juicy stack of smut.”

i enjoy his observations, particularly how bone marrow comes with a built-in straw, like nature’s very own Capri Sun.

i enjoy his confessions (or fragrance ideas, depending on who you are): Black vinegar holds the personal distinction of being the only vinegar I’ve ever considered wearing dabbed behind my ears as a cologne.

i enjoy his generous loose lips when it comes to his pornburger smoky burger sauce: Behind every great burger is a super-secret special sauce. This is mine.

and i enjoy his compelling imagery, like in his description of the half smoke burger stuffed with beef cheek chili: imagine all the beefiness of a Magic Mike dance routine, whittled down to a single hip thrust.

that burger is hypnotic.

and ramsey’s keeping it real; for every fancypants occurrence of a recipe calling for absinthe or oxtail, on the other end of the seesaw he’s championing msg or white castle. (although his suggestion that people who are not fortunate enough to live near a white castle should buy the ones they sell in the freezer aisle of the supermarket is terrible advice. moving is a much better option.)

a perfect example of the graceful dichotomy that is mathew ramsey is in a wonderful anecdote in which he praises dominique ansel and recounts how he made some delicious cronuts following ansel’s recipe; a recipe that takes three days to complete. and then he offers his own shortcut version, which is called “deesnuts,” takes 20 minutes, and involves tubes of pillsbury dough, which is rolled out with a wine bottle and has its holes cut out with a shot glass.

speaking of mofo, i’m a big fan of cussin’ in cookbooks like the potty-mouthed What the F*@# Should I Make for Dinner?: The Answers to Life’s Everyday Question, because sometimes food is loud and messy and uncivilized, and i appreciate when this is celebrated, offsetting those martha stewart types with their cool “i’ve never burned myself on a baking sheet” cyborg façade. and that is why i am so pleased to find here a recipe not for “hush puppies,” but for “shut the fuck up puppies.” because that’s how some of us live, and sometimes you just get too damn amped to mind your mouth, like ramsey when invoking the slumberjack:

there are just a few more burgers i have to call out as being especially panty-dropping. 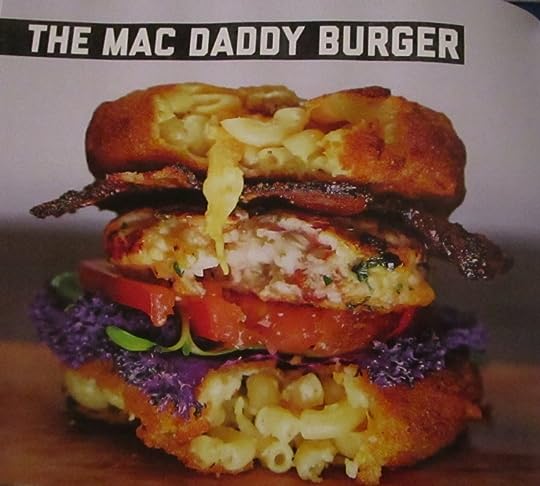 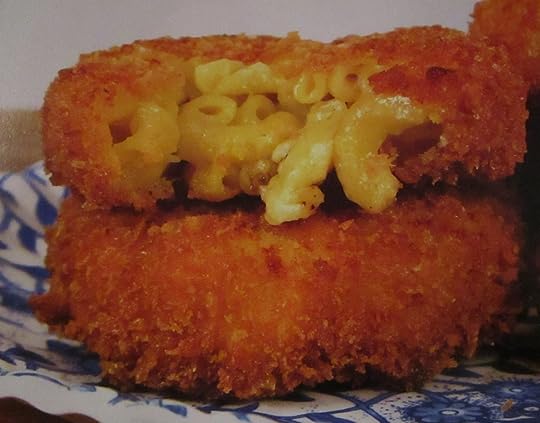 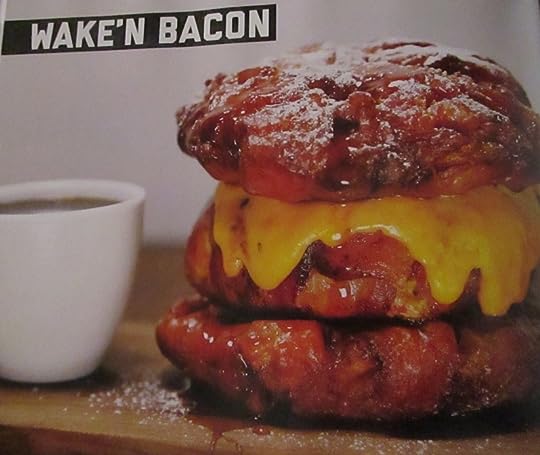 tell me more about this maple bacon-wrapped burger… 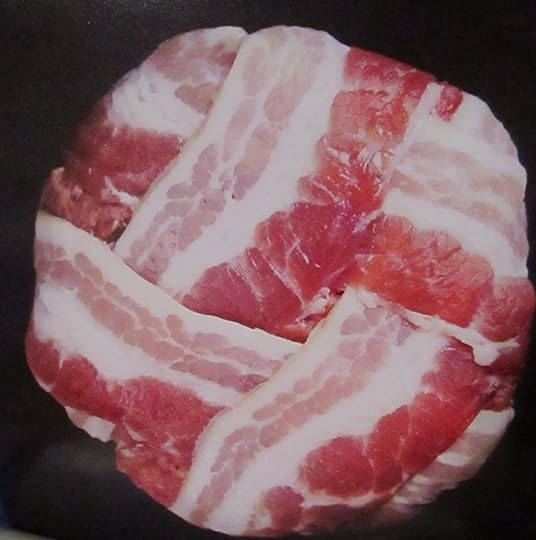 put a ring on that one.

do you even KNOW what this is???? it is a white castle cheeseburger (NOT from the supermarket, playa) that you put in your waffle iron and then you use two of them as a bun to hug a completely different burger. mind = blown. (and it makes me really want to dig out my copy of By the Sackful)

are you ready for this? it’s called “i can has pop-tart,” right? and it is a savory version of a pop tart where buttery pop tart pastry is filled with: bacon onion jam, beef, hamburger dills and molten cheddar and then dipped into pornburger sauce. 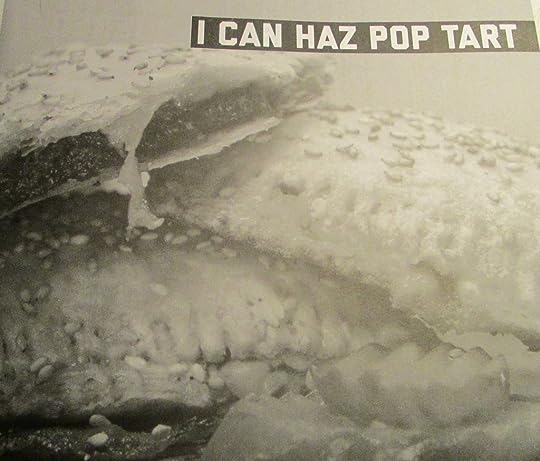 or, it was called “i can has pop-tart,” in the ARC, but changed to the more prosaic “cheeseburger pop tart” in the finished product: 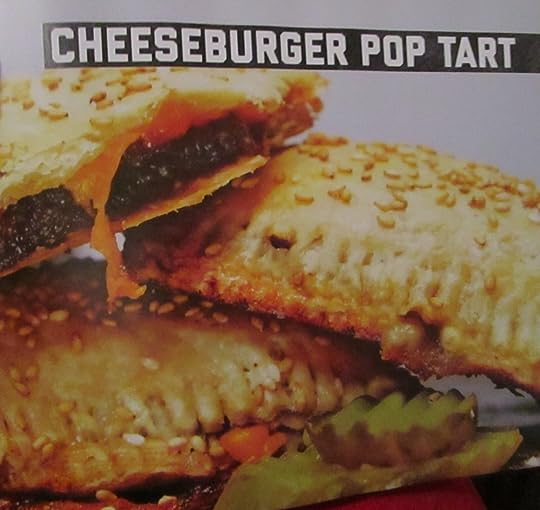 i can has ALL the cholesterol.

and finally, a drink recipe that i can’t even wrap my head around. it is called “the liquid diet,” for which one must first make white castle-infused rye whiskey, which involves stuffing warm white castle burgers into one of those big whipped cream canisters you charge with those little nitrous thingies you probably have only used recreationally, or if you once worked at ben and jerry’s like i did (there’s a venn diagram in those two sentences), and also making tomato water (here’s where the sieve i don’t have mocks me), and also includes spicy pickle juice, liquid smoke, and garnishes of onions, pickles, and tomatoes but THEN you drink it through a STRAW made of BACON.

not sure if this is love i am feeling or a heart attack.

i am only giving this four stars for now because i’m playing a little coy until i can get my hands on a finished copy where i can see the pictures in color. because this 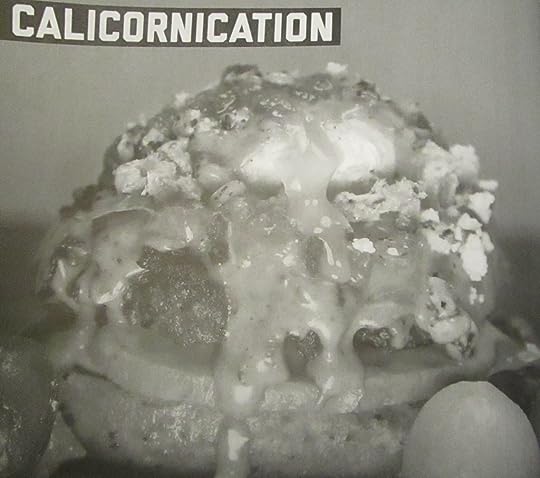 is all well and good, but can you imagine it in full-color? well, you’ll have to until i can swap it out for a color photo.

no more waiting! was i right in my prediction? 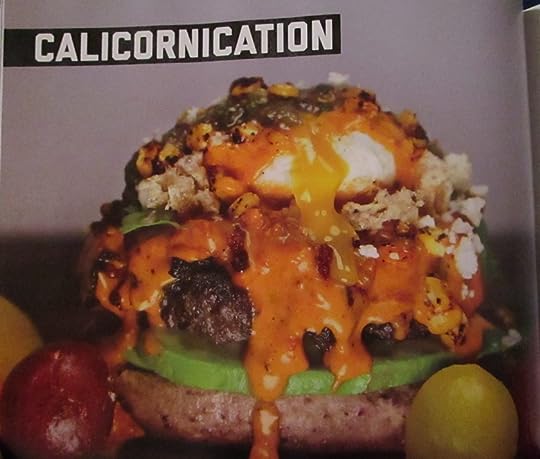 and this one – i bet this one is gorgeous, with the combination of colors from steak tartare, raw quail egg yolk, beet chips and trout roe, etc. 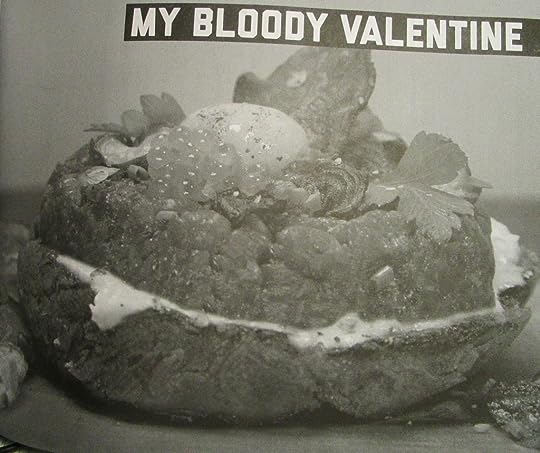 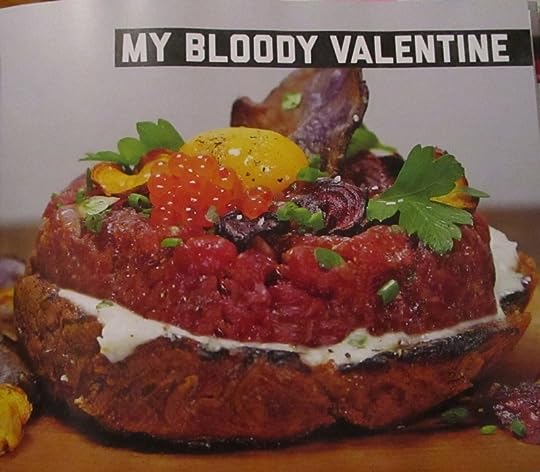 now go clean yourself up… 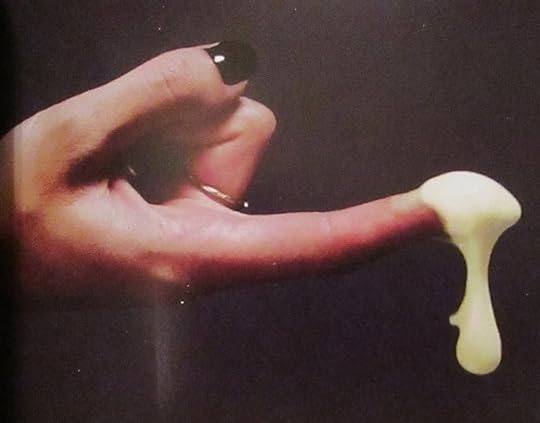