even though countless men, women, and children die in Motherfucking Sharks and a world is irrevocably undone by shadows in Sip, this new Brian Allen Carr book is much much sadder than either of them.

on the one hand, this is a very small story: riggle, an orphaned seventeen-year-old boy living with his meth-head uncle in rural indiana, is suspended from school during one of his uncle’s drug-induced disappearances and spends the week looking for him or for another way of paying the $800 in rent due at the end of the week, so he and his uncle’s girlfriend peggy won’t be evicted from their home. on the other hand, it’s a story as big as all america, as everything riggle thinks, observes, experiences, remembers, encounters, is a microcosm of the american experience; just an everyman ‘struggler’ in anytown, u.s.a.

Indiana history is the history of home building. Crop rotations. Outstanding winters. Their legends are of regular people—men who were strong enough to lift a wheelbarrow one-handed, women who could bake swell sugar cream pies.

…Hoosiers are some behind-the-scenes motherfuckers.

it’s sad, ruminative, meandering, honest, and surprisingly touching, especially in riggle’s memories of his mother and the stories she told him, by way of a shadow puppet named remote, about how the days of the week got their names, used here to mark each chapter/day. the stories are both surreal and revelatory, offering some insights into the emotional depths of the grief and hopes and fears she was wrestling with before her death. 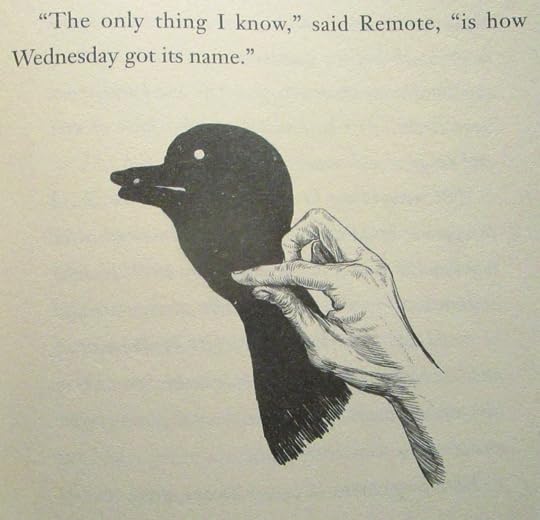 this is a sad and lovely book. it’s not a no-hope soul-gutter, but what a reader takes away from any book depends on what that reader brings to a book, and for me right now, ‘boo-hoo’ is my resting state, so the sad bits are gonna linger.

maybe your glass is half-full and you will experience this as a midwestern Ferris Bueller reboot about a kid who gets to take a week off school, sees Black Panther and makes new friends and an excellent omelet.

either way, you should check it out.

…I remember my mom after dad died, and I remember she had two modes. She was either staring off at nothing and holding her face, or she was slamming things around and cussing under her breath. And one time I told her that she was always angry, and she said that if she wasn’t supposed to be angry she wouldn’t be angry.

“You heard what I said.”

“What does your body need? When you’re angry.”

She scooped me up and held me to her. “Who knows?”

I think she was right. Sometimes you feel so terrible that all you know is that you need something, and when people feel that way, they go out looking. My uncle went out looking for drugs. My mother went out and found death. I think those shooter kids go out looking for violence. They think it will stop the ache they have, but my guess is it doesn’t…

I think, if you asked an adult, they’d say it just gives them more pain, but that’s probably not true. It probably gives them different pain.

well, then you get to check out my sweet Opioid, Indiana bag: 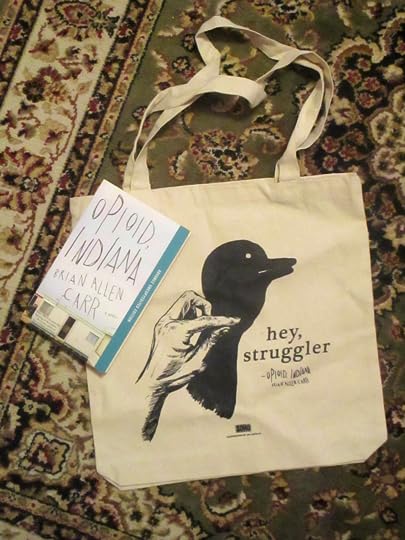