Nothing to See Here by Kevin Wilson
My rating: 5/5 cats

“This is weird, Madison. You want me to raise your husband’s fire children.”

i won this through the gr giveaways but i didn’t read it right away—choosing instead to read ARCs of books that were coming out before this one, then delaying it further for my horror-only october bookplan. i thought i had plenty of time before it pubbed because i saw this on the side of the ARC:

and misunderstood it to mean it was pubbing on the 19th of november instead of in november 2019. which i now realize is a monday—wait, no it’s not but ANYWAY THE POINT IS i put off reading it and the book came out before i began reading it and the joke’s on me because i liked this so much more than most of the books i read while i wasn’t reading this one.

THIS BOOK IS SO GOOD

before this, i’d only read one other book by him, Perfect Little World. i liked it fine, with some reservations, which was probably another reason i dragged my feet in favor of books i thought would be more slam-dunks in my heart.

but this one—good lord, i couldn’t read it fast enough; it grabbed me right from the start, and i never put it down without feeling a little tug of regret that i had to go do other things. i am someone who folds over pages in my books when lines are pleasing or memorable, and i was already a-folding by page two. all of it—the characters, the story, the conflict, it is brisk and funny and warm and wise and heartpunchy; it’s a perfect book about imperfect people; of love and family and responsibility, and you better believe i cried. <— and that? that is a thing that just doesn’t happen.

i’d been drawn to this one initially because spontaneous human combustion is rad, even if this is not quite SHC, because the h’s that are c-ing spontaneously are physically unharmed by the experience; they’re just two little kids who burst into flames when they have temper tantrums.

“How are they still alive?” I asked.

“It doesn’t hurt them at all,” she said, shrugging to highlight how dumbfounded she was. “They just get really red, like a bad sunburn, but they’re not hurt.”

“What about their clothes?” I asked.

“I’m still figuring this out, Lillian,” she said. “I guess their clothes burn off.”

“So they’re just these naked kids on fire?”

“I think so. So you can understand why we’re worried.”

which is all very striking an image, but it is so much more than the novelty of that situation. quick aside: i was at the bookstore the other day and this little girl was just LOSING HER MIND and through all the shrieking and wailing and snot and tears, all i could think was “welp, at least she isn’t on fire.”

the “children on fire” angle is the hook, but at its heart, it is about lillian—a woman trapped in the smallness of her own life after her chance to rise up out of her working-poor upbringing was stolen from her by the betrayal of a friend. as a teenager, lillian worked her ass off to win a scholarship to an elite boarding school where she met her roommate madison billings—a wealthy girl with just as much weirdness to her as lillian. the two became close friends and teammates—basketball phenoms who were inseparable until madison got into trouble, her father paid off lillian’s mother for lillian to take the fall, and lillian was expelled and sent back to her hometown in disgrace. the bribe money—meant to be put aside for lillian’s college tuition—was instead quickly spent by her mother on her own comforts. without the challenges and opportunities of the rich-kid school, without the possibility of a college education, lillian just sorta sunk into herself and stopped trying.

Everything was so easy, and nobody cared, and I lost interest…I started to care less about the future. I cared more about making the present tolerable. And time passed. And that was my life.

fifteen years later, lillian is twenty-eight years old and still right where she started: she’s been living in her mother’s attic, plodding through long aimless years of smoking pot, living paycheck to paycheck, defeated and angry but still in madison’s thrall; maintaining a periodic correspondence-based friendship with her—madison’s letters filled with tales of one cushioned success after another; the ease of wealth enabling a charmed life only getting more charmed as she grows older.

when madison writes to lillian, asking for her help, lillian doesn’t hesitate: I tried to think of a time when I hadn’t done what Madison had asked me to do. That time did not exist.

what madison needs from lillian is her loyalty and discretion; to take care of—and keep out of sight—her husband’s children from a previous marriage; ten-year-old twins bessie and roland who have just lost their mother and are afflicted with this unseemly fiery rage. madison’s senator husband jasper is in the running for secretary of state and flaming children would disrupt their picture-perfect family image: a beautiful, wealthy couple with a young son of their own who doesn’t burst into flames.

despite having zero training or experience with children, much less with “fire children,” lillian accepts the position and becomes their governess and sorta-jailor, which puts her once more in madison’s charismatic orbit—living on the grounds of their sprawling estate in tennessee, doing her best to keep the twins calm, extinguishing them when necessary, and sensing in them kindred spirits, an affinity unexpectedly kindling (heh) her unexplored maternal instincts.

Maybe that’s what children were, a desperate need that opened you up even if you didn’t want it.

the children have been uprooted and are full of raw emotional pain; grieving their mother, resentful of their sudden displacement, their long-absent father and his pretty young wife, their pampered half-brother, and this stranger being paid to care for them. the situation is not ideal, but the three soon find their footing and begin to form their own outsider version of a family, their trust built through honesty and candor, and lillian’s transition from reluctant foster parent into fierce mother bear is beautifully written.

i feel like i could go on and on about this book, typing out lines from the oh-so-many folded-over pages, and all the ways in which lillian’s situation—of squandered promise and self-disgust; feeling defeated and giving up, the anger, frustration, and shame of poverty—was so horribly relatable to me as i was reading it that i just wanted to howl.

Because I kept fucking up, because it seemed so hard not to fuck up, I lived a life where I had less than what I desired. So instead of wanting more, sometimes I just made myself want even less. Sometimes I made myself believe that I wanted nothing, not even food or air. And if I wanted nothing, I’d just turn into a ghost. And that would be the end of it.

And there were these two kids, and they burst into flames.

And I had known them for less than a week; I didn’t know them at all. And I wanted to burst into flames, too. I thought, How wonderful would it be to have everyone stand at a respectful distance?

the book simply crackles. it is all flames and fire and emotional damage but it is also hope and purpose and human connection, and even though i am not typically an emotional reader, this one got me right in the feels. i’m sorry i didn’t read it the moment it fell into my little hands, but i’m extremely glad i won a copy, because i probably wouldn’t have read it anytime soon without the guilt-prod i feel every time i win or accept a free book. maybe this glowing review will be your prod. if not, maybe this overlong quote’ll do it, the single best description of the oncreep of love i have ever read:

Sometimes, when the kids were invested in something, when they didn’t look entirely blasted by how shitty their lives had been, I’d try to truly look at them. Of course, they both had those bright green eyes, like you’d see on the cover of a bad fantasy novel where the hero can turn into some kind of bird of prey. But they were not attractive children, the rest of their faces soft and undefined. They looked ratty. I hadn’t even tried to fix their cult haircuts. I feared that fixing them would only make the kids more plain. They had round little bellies, way past the point when you’d expect a kid to lose it. Their teeth were just crooked enough that you could tell they hadn’t been handled with care. And yet. And yet.

When Bessie managed to get the layup to bank perfectly off the backboard, her eyes got crazy; she started vibrating. When Roland watched you do anything, even open a can of peaches, he looked like he was cheering you on at mile marker nineteen of your marathon. When Roland put his fingers in my mouth in the middle of the night, when Bessie kicked me in the liver and made me startle awake, I did not hate them. No matter what happened after this, when the kids moved into the mansion with Jasper and Madison and Timothy, no one would ever think that they were really a part of that immaculate family. They would always, kind of, belong to me. I had never wanted kids, because I had never wanted a man to give me a kid. The thought of it, gross; the expectation of it. But if a hole in the sky opened up and two weird children fell to earth, smashing into the ground like asteroids, then that was something I could care for. If it gleamed like it was radiating danger, I’d hold it. I would.

i missed out on this at BEA, but i won it through goodreads—hooray! 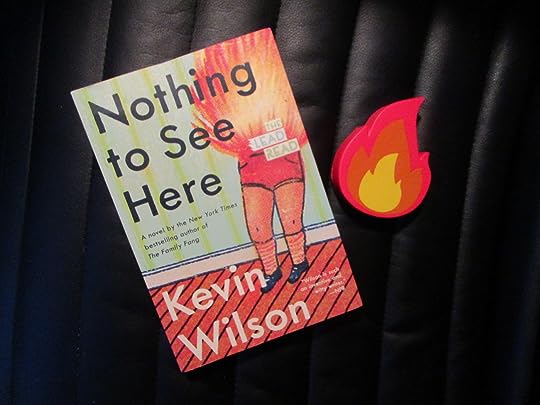 and it came with a squishy flame-shaped stress thingie. 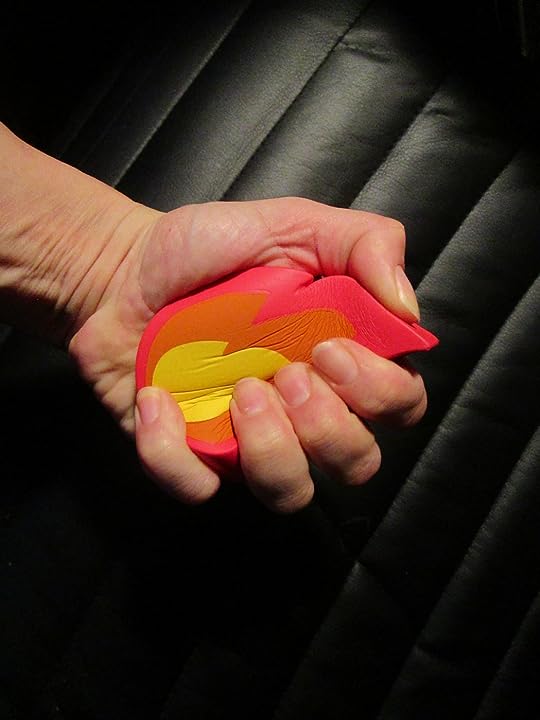