this book is how we solve our overpopulation problem.

it’s pretending to be an educational book warning toddler-age children about specific members of the animal kingdom—how they must be respected, treated with caution; how they are not domesticated animals who want to be cuddled and alla that, WHILE AT THE SAME TIME inviting and guiding their chubby little hands towards friendly cartoony representations of the verysame creatures on the page, baited with nubbly rubber bits for tactile stimulation. 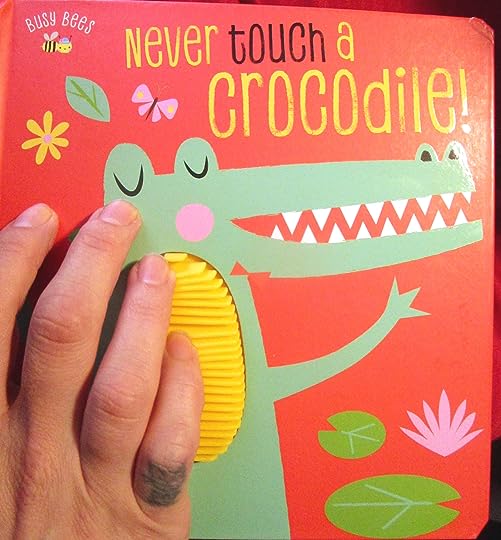 never touch a crocodile, but ooooooh so scrinchy!! 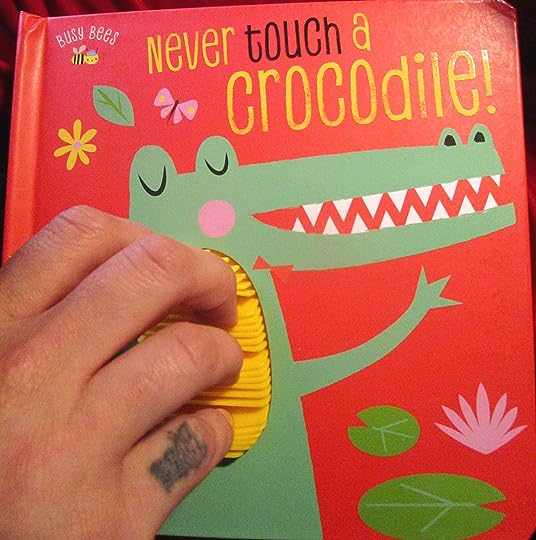 you can’t fool me, book!

i’m going to be spoiling the plot to a board book again. all ten pages of it. but i am going to do so in the role of a whistleblower so think of me like one of those little rubber doodads you stick into your outlets when you have kids that you’d rather not electrocute.

after the come-hithery of that crocodile on the cover—eyes closed and arms outstretched in vulnerable invitation, there follow pages featuring a tiger, an elephant, a walrus, and a hippo; all of whom are wearing either a hat or a bow tie or a hair bow, all of whom have ‘dorable little pink circle-cheeks (except for hippo, which is a matter of angle), and each cherubic little beastie comes with its own rhyming “warning” about how dangerous these creatures can be to the unwary. however, the warnings are themselves dangerous because of how misleading they are.

You must never touch a tiger. Don’t trust that fuzzy face. He may look nice and friendly but he loves a game of chase!

now, i realize that a board book for the 0-4 age set that went into graphic rend-and-tearing detail about what a tiger could really do to the human body would probably not sell well, but “he loves a game of chase?” who doesn’t love a game of chase?

that is not a deterrent to a child, nor are words like “fuzzy face.”

and, not to belabor the point—look at the layout here: 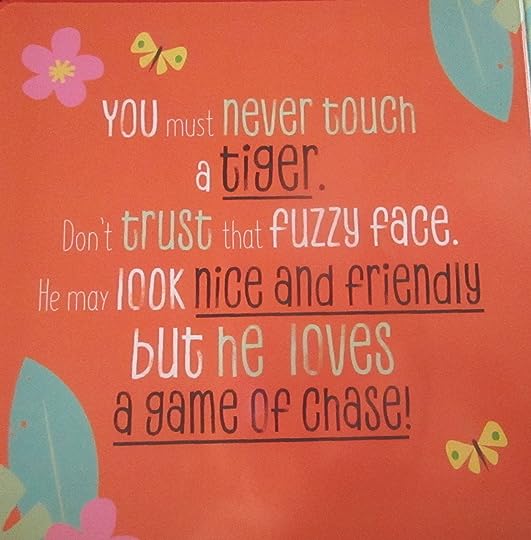 the underlined words say it all—a bullet-pointed subliminal advertisement: tiger. nice and friendly. a game of chase. succinct enough for a tombstone.

and coupled with this? 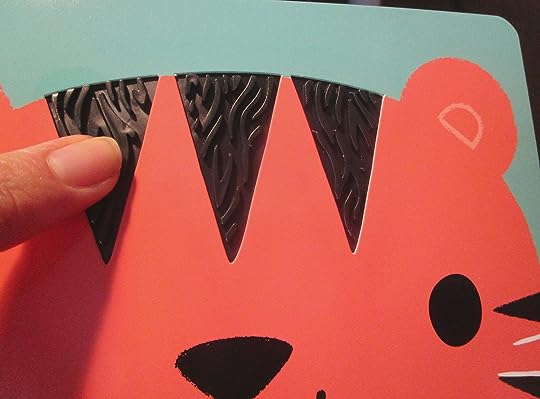 the elephant is next, and is arguably the least dangerous of the animals included—they’re not carnivores, they’re not defensively skittish around humans, and zoos even offer elephant rides to children—maybe even the verysame children drool-chewing on this book, so the only reason to throw one of these creatures in the mix is to make kids question, and ultimately disregard, the entirety of the book’s ‘no-touchy the animals’ message: “never touch an effelant? but my daddies paid the zooman for me to ride the effelant in the dusty circle and it ate an apple from my hand with its NOSE! hahah i love animals i go hug that bear cub in the woods now!”

You must never touch an elephant. Don’t trust that wrinkly grin. Elephants hold grudges and remember everything! 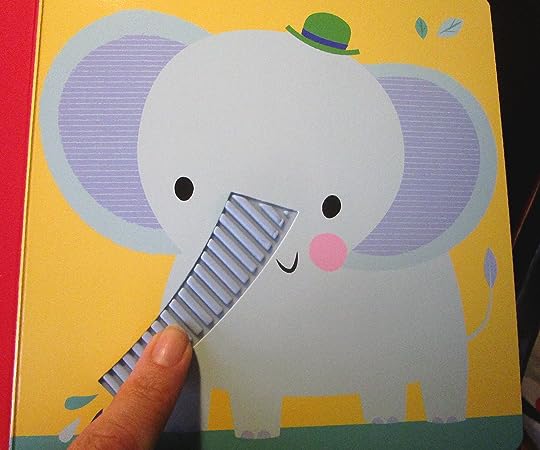 i remember everything, too, book, and i see what you’re doing. i am not distracted by a jaunty chapeau.

You must never touch a walrus. Don’t trust those toothy chops. And if she wears a yellow bow, it’s best to call the cops. 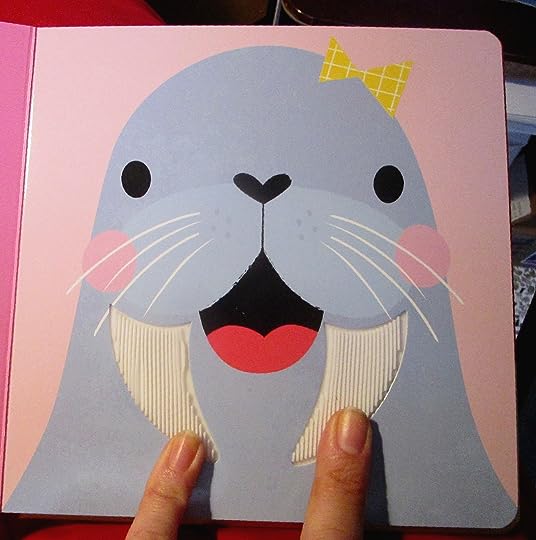 i mean, this is a worthless warning because it’s a completely manufactured threat—the ferocious yellow-bowed-walrus as some sort of boogeyman of the animal kingdom. but even if it WERE a thing that existed in the world, don’t call the friggin’ cops on a walrus! police are not equipped to deal with a walrus—their handcuffs are far too small. 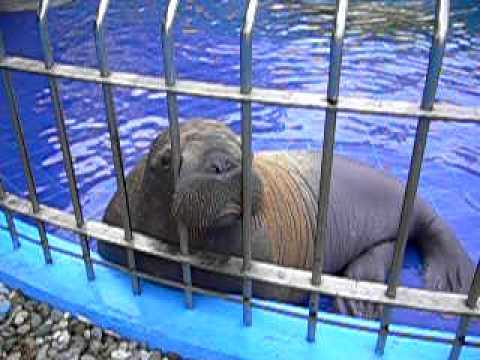 this poem’s writing is on par with lang leav’s word-garbage, and it is of as much use to humanity. besides, after that netflix/our planet doc, i am giving all walrus everywhere carte blanche—take it, take it all. you wanna call eminent domain on montana? done. you wanna pied-piper an entire generation of children to serve you iced drinks on trays while you bellow and sun your tummies—please, take them all, with our profoundest apologies.

on to the hippo, which is the animal most likely to mess you up without provocation and also, not coincidentally, the cutest fella in the book, with his enticingly bumpy LEGO-nose and that dashing sailor-cap implying that he’s a military hero protecting our shores and can totally be trusted, kiddos. come, touch the sailor’s bumpy nose… 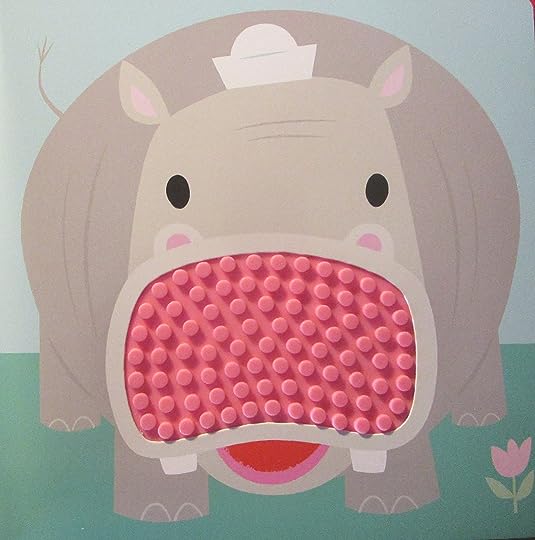 You must never touch a hippo. Don’t trust those jumbo jaws. This one’s always stealing hats, and might take one of yours!

that is an understatement at best. most hippos are not going to stop at a little lid-lifting. and you know some punk toddler is gonna read this, take a deep hit off their organic boysenberry vape pipe and be all ‘well, i’m not even WEARING a hat, so i’m totally safe’ and then they will learn the hard way, albeit briefly, where the real danger of hippos lie—in the stomping of feet and grinding of teeth but loooook aww… 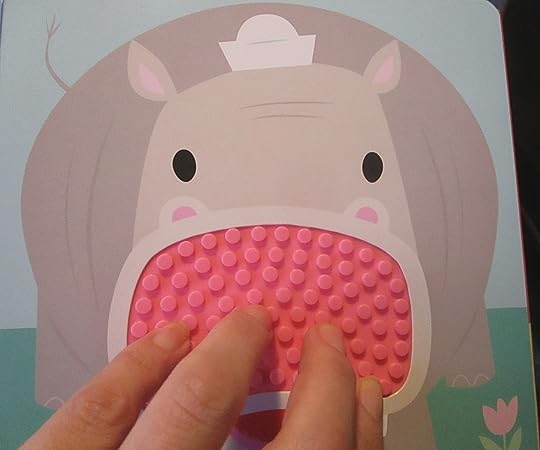 you do the math.

and finally, the cover model, who doesn’t even get his own poem, just a general “rule:”

So never touch wild animals: you just can’t trust this lot. Take our advice and please think twice—stick to the pets you’ve got.

along with the boldest invitation of all; not to scratch the tiger between its ears or stroke the elephant’s trunk, but to pet the very things that will be used to puncture your flesh. 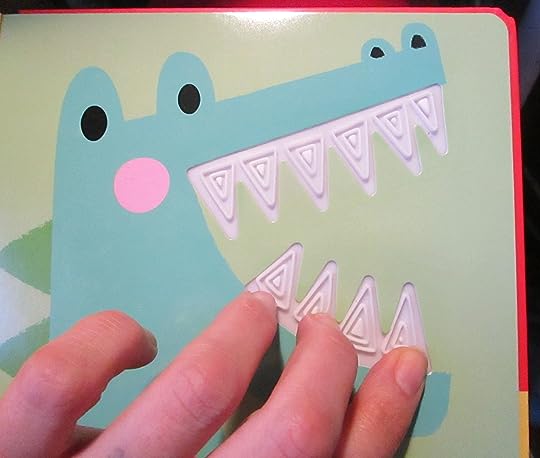 this book’s agenda is crystal clear: it wants to serve up your little mikeys and mollies like veal to every apex predator in the land. i suspect it was co-written by a hyena and a vulture with some sort of agreement about who gets the stringy bits that are left after the lions and polar bears have been sated. 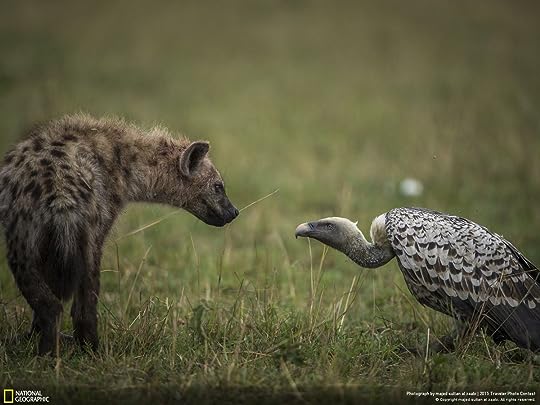 YOU HAVE BEEN WARNED