My Heart Is a Chainsaw by Stephen Graham Jones
My rating: 5/5 cats

REVIEW TO COME! for now, enjoy the song that was playing in my my head the whole time i was reading this, my smile is a rifle.

it came at me like a slasher-villain; stalking me quietly for aaaaages before murdering me spectacularly in the last act, and i never even saw it coming.

i’d been enjoying it—i may be a latecomer to the SGJ-appreciation society, but i’m an enthusiastic member, and this one’s got a strong opening scene, a good build, and a memorable teengirl protagonist/unreliable narrator named jade whose obsession with slasher films has earned her the same ‘spooky loner’ status of any tim burton character

but alas, there’s no conga-line-with-ghosts light at the end of jade’s tunnel; hers is an ingrained, bone-deep sadness characterized by loneliness, self-deprecation and self-harm. unlike her peers, she’s not looking forward to prom or graduation, the only thing she’s impatiently awaiting is a real-life slasher event in her hometown.

she views the world through a slasher-film lens, framing her life’s events within the context of genre rules and conventions; cataloging the parallels, interpreting the harbinger-y signs, convinced that a bloodbath is imminent, and she’s gonna relish watching it all go down.

an outsider through and through, she expects her role in the coming events will be as a witness rather than a participant—she’s not planning to instigate this slasher-scenario, nor does she aspire to become the final-girl-heroine of such an event, she just wants to watch the inevitable horrors unfold. her peculiar convictions strew breadcrumbs of ambiguity throughout the pages, but nestled alongside all the doubts and logical explanations surrounding her observations is the possibility that maybe—just maybe—she’s on to something.

its tonal stew of creepy and sad ticks all my horror-loving boxes, and it’s seasoned with wry humor and slasher-film references out the wazoo, but it lights such a long fuse, engaging in some prolonged narrative edging, which—for some readers, no doubt, cultivated an excruciating sense of anticipation, but to me, it felt unfocused and repetitive.*

the last part is just one giant bolus of horror-movie tropes and references you can practically roll-call: Friday the 13th? here! Get Out? here! The Ring? present! Jaws? blub blub rraaaarr! 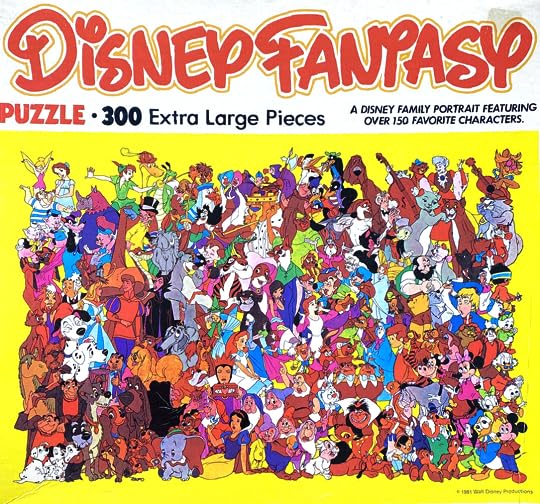 like that puzzle, i loved seeing everything take shape here and, just as i couldn’t, as a baby-karen, identify all of the depicted characters, i’m sure i missed many references, but they were clearly all part of the same world, contributing their part to the big picture, their pieces all fitting together in such a satisfying way.

here, the finished puzzle is a Cabin in the Woods meta-mash rollercoaster of adversaries: slashers and supernaturals and animals, oh my! a concatenation of realizations and retractions and spoke too soons and not quite deads and are we safe yets; a relentless bloodbath parade of stab stab stab

culminating in a breathtaking and unexpectedly emotional catharsis.

and when it was all over, i was raw and scoured and spent, and i was grateful for all of it.

and now that i know this is going to be a trilogy? my chainsaw heart is revving.

* when someone asked how i was liking the book, i said it felt like it had been treading water for ages, and after finishing it, i remembered that comment and laffed and laffed. for reasons.