”…nothing could be more pointless than to mourn the passing of a world that has only ever meant you harm.”

between the form and the content, this book is challenging in many ways, and i don’t see it making oprah’s book club anytime soon.

even though i have been shamefully negligent of czp of late – good at purchasing the books, bad at getting to ‘em, i do generally adore their contributions to the dark fantasy/literary horror part of my heart and when this one was pitched to me as “monstrously…horrendously bleak,” that it was “exquisitely written” and would “destroy me in a good way,” well, i scoffed and swaggered, figuring my appreciation for bareknuckled grit lit and maudlin thomas hardy had me covered across the entire “bleak” gamut. but that’s back when i thought “bleak” meant something along the lines of “dismal,” “full of misfortune,” “pessimistic.” in canada, it apparently means “a relentless assault of pain and suffering that doesn’t even give you a moment to process before it shoves more at you until you JUST CAN’T EVEN.”

just another of those slight regional linguistic variations, like how they call colored pencils “pencil crayons.”

interestingly enough, i once made a blanket announcement in my review for another czp title that the collective “you” couldn’t handle it. this one might be worse.

and it makes you WORK for the pleasure of having your head exploded – it’s written in a claustrophobically baroque style with prose you have to chew your way through. it’s not that it’s difficult, vocabulary-wise, but it is stuffed-to-bursting with words and highblown syntax doubling back in circuitous patterns, repeating, revising, speechifying, layering words on words on words until you wanna yell “talk like a person, sir!!” 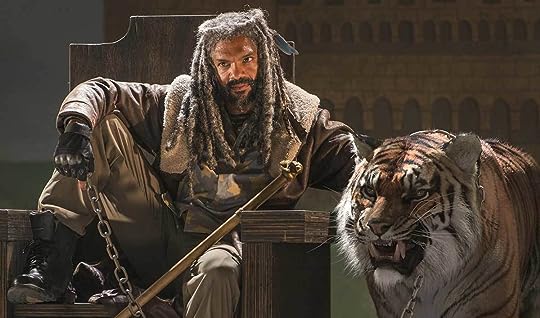 Given free rein I would cleanse this program of all rhythm and restraint and periodicity and instead submit every single trainee to an unremitting stream of horrors. I would devise an assault of dazzling ferocity — better to let the legion go unreplenished than admit even one candidate who bears the taint of the mundane — and exterminate them all.

yo, jason hrivnak, you tweet? nah, if words were music, this would be you:

i typically prefer my writing less… deliberate, but there are some passages here so gorgeous they’ll blow your mind. in a good way, not in that way from before with the forcefeeding of words and the animals fleeing in terror.

it’s an immersion into the madness of a character named thomas, which accounts for the claustrophobic frenzy of the prose; it’s dizzying and grim and disorienting, where time bends, motifs recur, stories are concluded many pages removed from where they began, and the focus is on a demon named dinn, who is shepherding thomas into the ranks of hell’s army using pain as a necessary converter, along with the desecration of the body through self-abnegation and the application of beautiful violence to carve a convert’s path towards something like a religious ecstasy, only more, you know, demony.

the process is … a lot, and one of the interesting details is that, in order to pass the training, it’s not just about being eeeevil,

but also being willing to self-inflict some of that suffering. dinn recounts the tale of one of his less-successful recruits:

From the very start he showed a distinct tendency to employ mundane notions of an unvolatile self, treating his body as some static reservoir for accumulated knowledge and power. He dismantled external targets with great aptitude and rapacity but balked like a child whenever called upon to direct that violence at himself. The final outrage took place just a few months after his recruitment. I ordered him to shear the flesh from his feet and in reply he looked at me as if there had been some misunderstanding, as if his little studies and little spells had endowed him with a snowflake-perfect uniqueness I would be foolish to damage or change. At that moment he seemed to regard me as some petty university bureaucrat, a dean who refused to recognize a prerequisite that he’d already and with distinction obtained. I could only shake my head. ‘I have seen your kind before,’ I said. ‘You believe that the wounds raddling my body are some kind of mere accoutrement, that autodestructive violence is an adjunct to demonism that you can take or leave as you please. The truth, however, is that my wounds constitute the most reliable proof of my accomplishments, for a trainee can acquire none of the necessary skills without enduring monumental suffering. The demonic potential of a given individual inheres first in his hatred of his own mundanity and second in the pitch of the violence he sustains in chasing that mundanity from his body. So far as I can tell, you have garnered to your name no accomplishments rooted in deeds noxious to the self. You are a stranger to elective anguish and no level of attainment in any subdomain of our craft can compensate for this particular shortfall. True embrace of the left hand path means flinging yourself voluntarily into the shredder of the training program, submitting your body to a long brutalization from which no part shall emerge unscathed. It means besting me in a race to discover the pain that you are least equipped to bear,’ I said. The occultist knelt before me and grovelled at my feet like some pederast before the mob, but the error of having fixed upon me such a queer and condescending look had already sealed his fate. Instead of killing him outright I confined him to an installation where he now spends all his hours being rolled flat feet first beneath a massive stone wheel. Every day at the stroke of noon the entirety of his upper digestive tract erupts like a prolapse from his screaming mouth and every day at sunset his brain-matter explodes onto the blackened flyblown floor. His fate is typical as only a small minority of trainees from the occult subtype are able to make the leap to an evil bereft of narcissism, to an understanding that the left hand path is not some childish treasure-hunt but rather an endless torment in which the body perpetually reforms itself around the task of inflicting harm.

sorry for such a long quote, but that’s what happens when every sentence is swollen with words like he’s some diabolical proust and it’s difficult to tell, in a book of block-text unrelieved by paragraph breaks, when to cut it off. that passage i find very successful, even though ordinarily, i would call “too many notes” on it.

the breaking-down process isn’t all physical – it also involves isolating the individual from friends and family, although family may be doing itself in just fine on its own, The institution of the family is a damage-factory. It’s purpose is to ensure that only the very worst traits of the forebear are passed along to the child, each new generation thereby systematically divested of both the desire and the ability to improve.

there’s also pain inflicted through nostalgia and loss and visions and oh, so many other ways:

I led him onward into a detailed mirage I’d crafted for this very occasion, a wide patch of floor that was lit from above as by a single downward-pointed spotlight. A long table stood athwart his path and as he approached it he saw that its surface was covered with all the treasures he had lost over the years. An inordinate number of the objects in question originated from back in his childhood, many so deeply buried in memory that but for the mishap of this late encounter he might never have thought of them again. Here lay the storybooks that had lulled him to sleep, favourite toys miraculously healed from states of irredressable breakage. The puppy that had died just weeks after entering his childhood home lay sleeping peacefully in a nest of blankets, calmly and factually restored from the death as through some brilliant form of forgetting. Other items on the table came from later phases of his life and these induced a more complex form of heartbreak for their status here was necessarily more strained, each having been treasures despite the certainty that they would eventually be lost.

there really is some beautiful writing here, and some descriptions that are going to stay with me, not all of them of the tooth-extraction/dismembered animal variety.

three stars because the style isn’t my personal cuppa, but the guy sure can write.

”No wonder the world looked empty and blank, no wonder you saw no place within it for a creature as ignoble as yourself. By the onset of adolescence every mundane is a war-veteran and like every war-veteran he longs for a return of the peril in which he knew himself most alive. The adult is not the apotheosis but rather the wreckage of the child, the tall thin shadow of a toddler-king who reigns with the dawn at his back.

not…an easy read. i feel battered, and i’m going to need to sit with this a bit before i can sort out thoughts and feelings and all that.