whenever a goodreads friend asks you to read their book, there’s always that momentary burst of panic. what if it’s not good, what if they’re very sensitive, what if my reaction to it causes awkwardness on the internet???

but, man, does that pressure lessen when it’s a parenting book about how using the values of judaism to raise your child will increase your likelihood of raising an awesome kid, and you have no children and no plans to breed and you can just sit back and read it, relieved that since you have absolutely no authority to judge this book’s usefulness in practice, your lack of qualifications make any response you have to the book utterly meaningless.

which is very freeing.

i have never ever read a parenting book, so i have no clue how this stacks up to others of its kind, but this one has such a strong voice, and is such an excellent mixture of history, personal anecdote, theology, pop culture, and common sense, it’s an absolute delight to read, and while it didn’t make me wanna spawn, it did make me think that if a baby immaculately popped out of my lady-bits, i would totally use this book to guide it to awesomeness.

you don’t have to have an ounce of jewishness in you to get something out of this book. as the author says, Jewish motherhood is a philosophy, not an identity!, and the lessons here are not religious in tone, but they emphasize the jewish values of community, family, reading, awareness of the world around you and your place in it, independence, good deeds without the expectation of praise, and just general menschiness.

and it is FUNNY!

i grew up in a place with a very small jewish population (rhode island – which is coincidentally where the author is from, and when she mentioned ocean state job lot, my heart did a little flip), before moving to a place with a very large jewish population (new york city – also like the author, who apparently lives right near this hell’s angels club where i once had a really great conversation with a biker about paradise lost). my familiarity with the jewish faith has all been experienced through reading or watching things, and i know the basics, but this book did an excellent job detailing the values, priorities, and other important touchpoints through lively discussions of ritual, historical elements, stereotypes, and everyday practice, so even if you know nothing, you will learn what you need to know.

there’s no sense of superiority here:

I don’t necessarily think Jews are smarter then other groups. Maybe we just read more. If I actually believed that Jews were inherently brainier than other people due to our awesome Jewy genes, I would not be writing a book telling you that Jewish parenting is worth emulating. Also, I would be insufferable.

and all the proof you need that this lady is worth listening to is in her astute observations about parenting trends:

When we helicopter-parent, we not only don’t teach our children independence, we teach them that they’re doomed to fail – or at least fall short. Because they quickly learn that in the real world, which shockingly does not, in fact, revolve around them, they won’t be repeatedly told they’re perfect. We teach them to be cynical (because we’ve lied to them) and contemptuous of themselves and others (because no one can live up to the impossible standard that’s been set for them).

and on too-easy praise:

Help your child in their quest for meaning. Don’t try to bolster their sense of self by applauding stuff that’s essentially meaningless. If they are over the age of two, do not coo at them, “I like the way you used your words!” If they got a good score on a dumb multiple-choice test you know they didn’t study for, don’t celebrate it. Tell your children what is expected of them, and after you have told them what is expected of them, stop cheerleading when they do what they’re supposed to do.

the goal should be to Worry about building a kid who is good, not a kid who has good self-esteem, which is simple, perfect, logical.

also to her credit is the fact that all of the stories she shares about her daughters prove that they are hilarious little pips, like this punchline of a tale about when her daughter was three:

“Daddy says that when someone teases me, I should walk away. And I did walk away. But then I came back. With a bat.”

bats aside, they also know how to throw a party. one of her daughters even held her bat mitzvah at the strand, proving she is the coolest kid ever:

She gave each friend a book. There was no band, no DJ, just good food and a bunch of kids lying on the floor in fancy outfits reading.

ingall quotes leonard cohen, poo-poos philip roth, is ready to throw down with harold bloom, calls the mother in Love You Forever a freak, was the the senior writer and books editor at sassy freaking magazine, and has Jurassic Jane Eyre: The Dinosaur Turned Me Lesbian on her e-reader. although she has neither rated nor reviewed it here on goodreads, which is a shame.

even though it’s frequently funny, it’s not at all frivolous – there are some excellent points here. i read this on my nook and i have never bookmarked as many pages in a nook-book as i did with this one. and while no babies are gonna come out of me, i kind of want to push some of these lessons at all the new york parents (or nannies, to give to the parents), because so much of it seems like common sense, and yet the uncivilized behavior i see around me means that someone’s falling down on the parenting job.

it’s solid, practical stuff: building a relationship with your child in which discipline and community, the importance of asking questions rather than giving answers, actions over lip service and beliefs, all contribute to shaping children who are kind, independent, ethical, hardworking, creative, generous, and engaged in the world.

it’s thought-provoking, and she delivers her ideas in a witty, straightforward tone that’s never afraid to point out her own missteps or throw in a “jews run the media” joke. because humor is one of the most important jewish values.

i loved this book, even though i’ll never use it in any real-world way. however, i encourage all you chilbearing folks to check it out and take it to heart, even if it’s just for this one lesson, because it could really fix a lot of the world’s self-congratulatory bullshit in one go:

You and your kid don’t have to do astonishing, creative things to do tikkun olam*. Small acts can be powerful. But it’s important to do work that meets an existing need (as opposed to yay, we wanna help hunger, let’s collect cans of old beets!) It’s vital for upper-income kids not to see themselves as heroic rescuers of downtrodden peoples, ennobled by consorting with the rabble. Make sure your kids know about the vast numbers of people working in their own communities to make change. They’re heroes, not victims. (As the midrash says, “More than the wealthy person does for the poor, the poor person does for the wealthy.”) Making sure kids are educated by reading books about diverse communities and by learning about injustices throughout history (not just those perpetuated on the Jews) is as important as refraining from charging in with a savior complex and a lack of historicity thinking you’re a champion.

i’m really glad i read this, and i hope it starts having an effect and making better humans who will be nice to me when i am old and frail and alone in the world.

*A Jewish concept defined by acts of kindness performed to perfect or repair the world. 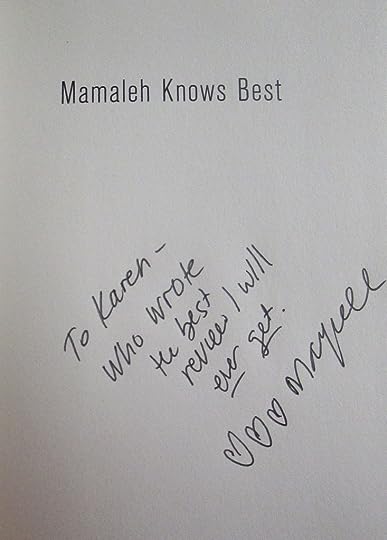 and she’s freaking adorable when she reads and fields questions: 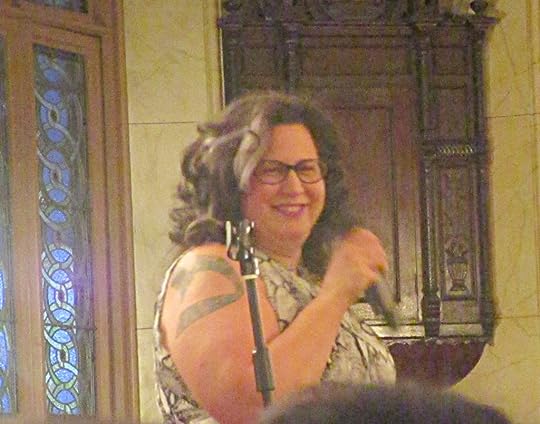 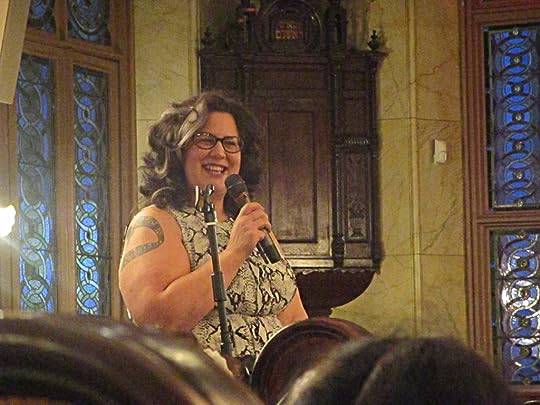 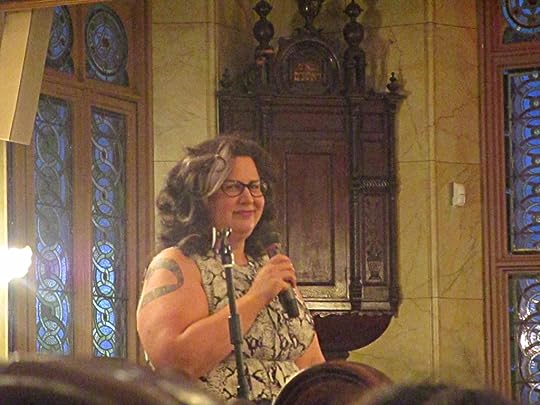 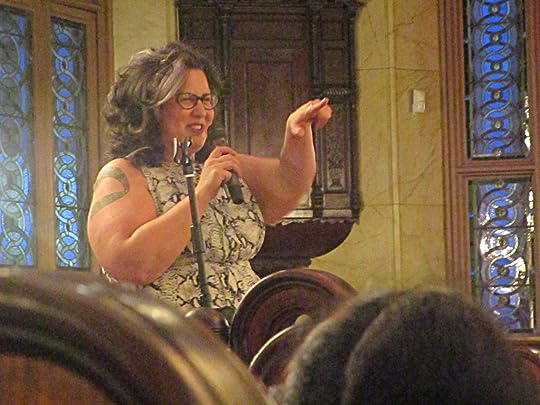 and a little badass when she poses for pictures, where she’s probably thinking – “i worked at sassy, bitches!!” 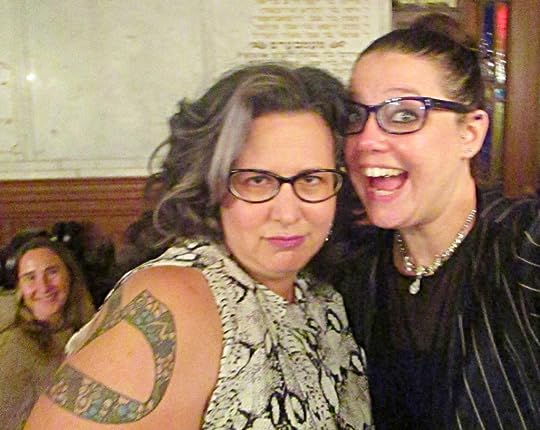 when greg asked me what i was reading, i took great delight in his baffled expression when i said “a book about jewish parenting!!”

i got one ovary, no patience for nurturing, and i’m full-on gentile, so i’m not the target audience, but so far, it’s a lot of fun!