Whodunnits are all about truth: nothing more, nothing less.

thank goodness for this self-imposed 2019 project o’ mine, where i finally start chipping away at books that have been sitting unread on my shelves for years; books i bought in hardcover (sometimes on the very day they were released) and for one reason or another, never got around to reading and then suddenly time has passed, the paperback’s come out and i still haven’t read the hardcover i was so motivated to buy with MUST HAVE NOW grabby hands, and seeing them sitting on my shelves, all silent expensive accusations, makes me feel SO guilty. 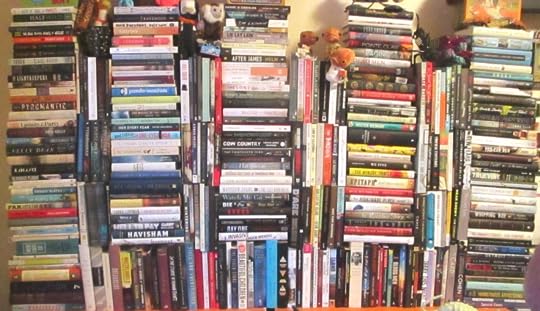 but this one shall judge me no more!

i’d forgotten everything i’d ever known about this book – what its deal was, why i wanted to read it so badly in the first place, other than ‘people were dancing in the streets over it a few years back,’ and going in memory-wiped was a real treat for me.

this is one of those books that is just plain fun. to save myself time since you’ve probably already read it (or to allow you your own journey of discovery if you haven’t), it’s enough to divulge that it is a mystery within a mystery written by someone who loves …wait for it… mysteries. it’s both a love letter to and a loving dissection of the genre, paying conscious tribute to mystery’s tropes and traditions: the red herrings, the clues and codes, the least-suspected suspect, the misunderstood conversation, the unseen observer – all the deductive breadcrumbs of a conventional english cosy mystery, whose most appealing feature is the relationship between the reader and the detective:

In just about every other book I can think of, we’re chasing on the heels of our heroes — the spies, the soldiers, the romantics, the adventurers. But we stand shoulder to shoulder with the detective. From the very start, we have the same aim — and it’s actually a simple one. We want to know what really happened…

here, we get two mysteries; one bound up inside the other, both literally and figuratively. (incidentally, the attention to detail of the book-within-a book was very much appreciated – ♥ the blurbs! ♥) once the second mystery hits, and the inspirations and parallels and similarities between the two start playing out, it becomes such a fun ride, and conway’s bitter humor, private jokes and judgments tucked into the story as he bites at the genre that feeds him were a hoot.

this is a fun, breezy book. it’s not reaching for the stars, but it’s a solid whodunnit with metafictional flourishes that don’t detract from the actual mystery plot(s), which are fair play, tie up nicely, and i only regret i didn’t get to read it under the proper conditions described in the book’s opening chapter:

A bottle of wine. A family-sized packet of Nacho Cheese Flavoured Tortilla Chips and a jar of hot salsa dip. A packet of cigarettes on the side (I know, I know). The rain hammering against the windows.

What could have been lovelier?

alas, i had to settle for dunkin’ donuts coffee, a rattling subway car, interruptions by buskers with keytars and loud cellphone conversations in a variety of languages, and zero cigarettes or booze. #StillShePersisted