We were burnouts in a burnout town. It took half the length of a Sam Decker movie to get to Orlando from where we lived, and even the city was a four-year-old’s dream, not a nineteen-year-old’s. The high school that we had gone to was not the type whose graduates went on to Ivy Leagues, or first- or second- or even third-tier liberal arts colleges. There was a community college in town where some of our classmates floundered and delayed having to look for jobs that paid by the hour, and the valedictorians usually made it to Florida State or the University of, but that was about it. By not bothering with these consolation prizes, we felt like we were making a point, though I’m not sure we could’ve told you what it was.

i’m kind of a sucker for bad girls. i have a “girls gone wild” shelf on here for a reason.

for me, megan abbott is the one who writes these kinds of stories best. even in her arguably less-successful books like The Fever, there’s still something so darkly glimmering in the way she writes about the underbelly of teenaged female friendships, it gives me thrills.

this book is fine, but it didn’t give me the abbott-thrills.

which is surprising, considering its components and how they are all so much in keeping with my tastes: the narrative foundation is of a group of four teenage girls: maggie, nina, lindsey, and lila, who are a little wild and tighter than tight until a tragic EVENT drives them apart. years later, now nineteen, they are still living outside of orlando – stuck in the wake of a tourist town with no real prospects in love or work, returning to the same dive bar every night and going in sluggish circles, exhaustedly bitchy and directionless as they obsess over celebrity magazines and dream about getting out of their hometown.

It felt like everyone was only ever one eye blink away from being somewhere else – somewhere even more glamorous and charming, where they would smile even wider. It felt like we were all one reality show or contest away from joining the faces on these pages, and this made us wish for things it might never have occurred to us to want, otherwise.

three of the girls are still friends, but it’s a tainted friendship, compromised by that shattering EVENT in their shared past and lila’s subsequent splintering off into enemy territory – a group of bitchy rich girls. they’re all a bit more cynical now, bored with their lives and with each other, just kind of going through the motions of friendship. until the night both lila and, separately, one of their beloved dreamy celebrities walk into “their” bar and *gasp* sam decker chooses to spend the evening drinking with the three of them. he’s hunky and charming, and it ends up becoming like some kind of live-action reality show where he is given a glimpse into the lives of regular folk as they flirt outrageously and competitively; dishing about themselves and each other and their former friend while they ply him for celebrity gossip and see what they can get away with.

he will be dead the next day.

the premise is good, but it’s the execution that flounders a little. the problem for me was mostly with the voice. the story is told from the perspective of maggie, as an adult, looking back on this night when she was nineteen, which night is largely spent looking back on their earlier adolescence. so, although it is an adult voice telling the story, there are too many instances where thoughts are presented as occurring in the brain of a teenager that do not ring true. for example, this, which occurs at halloween when maggie is still in high school, just after her little group has been scattered post-EVENT:

and there are more examples of this :

I remember feeling, when I saw them, the full weight of how young we were, and that we wouldn’t always be. It was one of those rare moments when you’re not sitting around waiting for something to happen or reflecting back on something that already did, but simply marveling at what is. When the present, the middle child of tenses, swallows the ever-dominant past and future, and your entire life floats within a single moment. I remember thinking, This is what it is to be young. You will tell this story later.

now, if she hadn’t said “I remember feeling” and then threw on an “I remember thinking” on TOP of that, i could have written this off as ’emotion recollected in tranquility;’ an adult articulating the youthful moment with adult perspective. but, no. and so it comes across as inauthentic, overexplicated; these lofty and measured thoughts that don’t mesh with a teenager in the middle of pranking a boy. you don’t really feel this kind of bittersweet and grasping nostalgia in the frenzy of a careless and immortal teenage life. unless you have benjamin button disease.

so it just comes off a little graceless and contrived, which spoiled my reading experience by bringing me out of the story to question the narrator’s reliability. not in a good patrick mccabe way; in a way that brought out my inner editor.

and what teenage girl can drink SEVEN beers before she has to pee? and where can i learn that trick?

i’m being unnecessarily catty, so these girls would probably dig me. it’s far from hopeless – there are some really lovely parts, especially those that describe that restlessness to leave the place of one’s birth, and the lack of resources limiting options:

…I suddenly wanted everything to match the electric buzz that Decker’s presence had created at our table, and in our lives. The friendly, chatty exchange of information that our conversation had been up until that point suddenly felt like a waste of the opportunity we had been presented with*. Maybe I had reached the point of drunkenness where you talk just to hear yourself and reckless ideas take shape, but it suddenly occurred to me that if even a movie star joining our table couldn’t change the routines and settings of our Saturday night, maybe we were doomed to a life where nothing ever changes. Not the scenery or the seasons or the things you did to pass the time, no matter who** you passed them with.

it’s mostly entertaining, if a little overworked. you get two “mysteries” for the price of one: what the EVENT was that drove the girls apart, and how decker dies. although the EVENT was less shocking than i had hoped. wow, i am stuck in a negative spiral today! i gotta get out of this review while i still can.

tl:dr – an entertaining book, but not the best of its kind.

* with which we had been presented
** whom

i KNOW, this character would never say “whom,” but once you unleash the inner editor, there’s no stopping it… 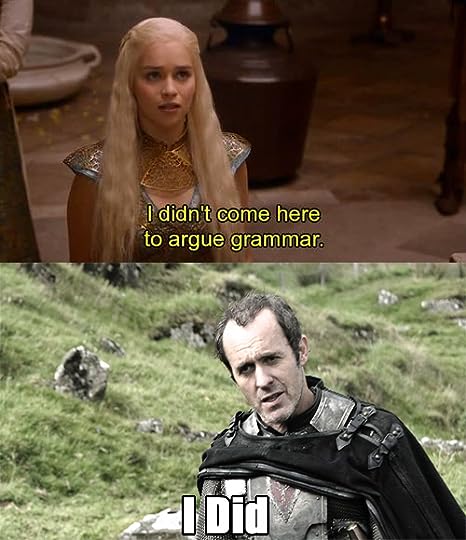