The strong do what they can. The weak suffer what they must.

a zombie book that takes place on the appalachian trail with survivalist elements?? ummmm – YES!! but even though i didn’t win this through the firstreads program (grrrr) and it seemed to be unavailable anywhere for the longest time, i finally got my hands on a copy. talk about survivalist skills! i survived long enough to read it, and i am so glad, because it is all the things i love.

The Appalachians is a part of the world no one really understands. It’s a hard place to live. It is cold, isolated, and requires effort. You really have to love the place to live there. But you can’t go there hoping to find something inside you. It’s a place you go when you know that something is already there.

it is one of my favorite book-locations, full of tough, enduring people, who utter stoic expressions such as:

“What you want ain’t what you’re gonna get. Now you have to want something else.”

2) badass protagonist who is hiking the appalachian trail after he loses his job working for the major meat inc and says things like:

–But the Appalachian Trail is an inspiring thing. Two thousand miles of the hardest terrain, isolated from single conveniences…I was happy to see the winter. Happy to wake to snow and frost, to shit in the woods, to go without. To carry a knife and rations and sleep on hard ground.

–I slept naked, but not without my hunting knife.

–When your body burns and wants to stop, you tell it to shut up and you press on.

so – three great reasons to read this book. our badass, jack, has been hiking the trail for about a month when he runs into something unexpected. and even the terminally badass can be afraid of a ZOMBIE BEAR!! 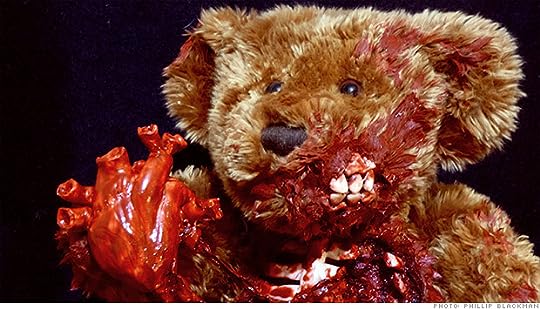 and he manages to do what needs to be done, naturally, but the experience leaves an impression on him.

I’ll tell you again. There wasn’t much I was afraid of. I was thirty, seasoned and all-knowing. After that night, I was just thirty.

after the bear episode, jack meets up with some people and learns that while he has been sleeping naked in the snow and killing vicious bears, there has been a zombie epidemic, resulting from tainted meat from the very same company from which he was fired.

and from then on, it is all zombie action and bloodshed. jack will be forced to kill people and animals, run from vigilantes, escape compounds of the infected, and while readers will learn about what not to do when it comes to bear traps, jack himself might learn a little… about loooove. but tough love. because, rarrrr.

it’s very good. a fast-paced and very practical zombie story with a few surprises along the way. also, a tree saw.

who needs you, anyway, firstreads?