I Am, I Am, I Am: Seventeen Brushes With Death by Maggie O’Farrell
My rating: 4/5 cats

At the time, I gaze up at the sky, the birds, the fast-moving clouds, and I am thinking about the dense forest behind us, about how I do not want to be dragged in there, not at all. I do not want to see the trees closing over my head, feel the scratch and pluck of bushes against my skin, my clothes, the cold damp of the ground in there. My thoughts are very simple. They pulse through my head: let me go, let me go, not the forest, not the ground, please.

conceptually, this is wholly original and a bit chilling – a memoir told through all of the author’s near-death experiences, with a total of seventeen chapters.

that’s too many, right? i became outraged at capital-d death on her behalf, for cat-and-mousing her around so much – go pick on someone your own size, etc etc.

but it’s not quite as dire as it appears – the final chapter is about her daughter, whose severe food allergies reminded me of another memoir – Don’t Kill the Birthday Girl: Tales from an Allergic Life, so it’s really only SIXTEEN personal near-death experiences, which is much more reasonable; slightly more lives than a cat, considerably more than most humans.

and some of the situations in those sixteen chapters are nearer to death than others – going for an AIDS test after your partner has been unfaithful is a far cry from having a machete held to your neck. although, machete-to-neck should be weighted to count for at least two, especially if it is not the first time a killer has threatened your life via that slender stalk. and just some friendly advice – after three near-drownings, you need to take the hint and stop going into the water. it does not want you inside of it and is saying “no,” the only way it can.

it’s a very novelistic approach to writing memoir, both the novel-ty (HA!) of the approach, and the style of the writing, which is vivid and descriptive, expands and contracts in focus, wraps anecdotes around other anecdotes, and switches from first to third to even second-person from chapter to chapter.

although the premise seems designed for thrills, it’s a much more reflective than sensational approach. she’s very pragmatic about her experiences:

There is nothing unique or special in a near-death experience. They are not rare; everyone, I would venture, has had them, at one time or another, perhaps without even realising it. The brush of a van too close to your bicycle, the tired medic who realises that a dosage ought to be checked in final time, the driver who has drunk too much and is reluctantly persuaded to relinquish the car keys, the train missed after sleeping through an alarm, the aeroplane not caught, the virus never inhaled, the assailant never encountered, the path not taken. We are, all of us, wandering about in a state of oblivion, borrowing our time, seizing our days, escaping our fates, slipping through loopholes, unaware of when the axe may fall.

the chapters are titled after the part(s) of the body made vulnerable by or responsible for each close call, with a nice olde timey anatomical rendering of said parts. 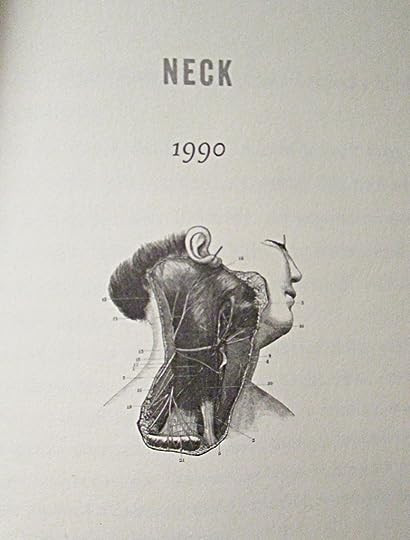 i’ve chosen a pull-quote from each chapter to entice you with her writing chops or the shivery allure of the situation. there’s a lot packed into these stories, and i definitely recommend this one as an intriguing alternative approach to memoir.

I am careful to use strides that are confident, purposeful, but not frightened. I am not frightened: I say this to myself, over the oceanic roar of my pulse. Perhaps, I think, I am free, perhaps I have misread the situation. Perhaps it’s perfectly normal to lie in wait for young girls on remote paths and then let them go.

I am eighteen. Just. I know almost nothing.

(this story was really frightening, but it reminded me of an even more horrifying close call story, which you need to watch here: http://www.trutv.com/shows/the-chris-…)

At sixteen, you can be so restless, so frustrated, so disgusted by everything that surrounds you that you are willing to leap off what is probably a fifteen-metre drop, in the dark, into a turning tide.

I remember that I kept going. I kept moving my feet, kept powering on through the mountain air, as if nothing could touch me, nothing bad might happen, if I could just keep going, keep running, keep moving.

The air is filled with screaming, with curses, with prayer. A man with blood coursing out of both nostrils starts to yell in a language I don’t understand, gesticulating wildly. Drops of blood scatter from his face to mark the seats, the ceiling.

We had more money in our pockets and bags than we’d ever carried before, at any time in our travels. The man takes it all from us, pulling it out from the various places in which we’d stashed it. We hand it to him, in exchange for my neck, its arteries, its tendons, its muscles, its trachea, its oesophagus, for it all to remain in its current unbreached state.

The floor was awash with blood and people were running. It is never a good sign, I’ve found, when medics run.

You will watch your body backtrack, go in reverse, unpicking its work: the sickness recedes, your breasts shrink back, your abdomen flattens, your appetite disappears.

I straighten my swimwear, watch the water drawing the blood off my skin and whirling it away, as if it has need of it, as if it has some purpose in mind for it.

Because why not? Why not let a man you’ve never met, a man you have no reason to trust, throw a fistful of knives at you?

”There was that other time,” she says, “when you didn’t stay in the car. Do you remember?”

She is aware of having dodged something, of having pulled her leg out of the trap, once again, at the last moment.

What came out of me was streaked with blood, mucoid, meaty in texture.

Infidelity is as old as humanity: there is nothing about it you can think or say that hasn’t been thought or said before. You go back and back over the days, the conversations, the walks you took, wondering why on earth you hadn’t seen it, how you could have missed it, how you could not have known. The pain of it is interior, humiliating, infinitely wearying.

Right now, my son is nine weeks old and I’m finding my way, blundering forward with this new job, this new life. Right now, I’m in France, for reasons that are no longer clear to me, trying to breastfeed in a hot car by the side of the road. Right now, Will has disappeared over the dunes to look at the sea and two men are rustling their way out of the maize field on the other side of the road.

I gather, from all the listening in, that I am to have what is called a CAT-scan. The name of it is a comfort to me, conveying as it does fur, paws, whiskers, a long and curled tail. It will, from what I can glean, take photographs of my brain and these will tell the doctors how to make me better. I like the sound of this CAT-scan: the photographs, some manner of feline involvement, the making-better.

We never leave the house without her medication, her emergency kit. We know how to inject her, how to administer cardio-pulmonary resuscitation, how to recognize the signs of low blood pressure, respiratory distress, urticaria, the onset of cardiac failure.

I know I must nod calmly when people tell me they understand exactly how I feel because they have a gluten allergy, which makes them really bloated whenever they eat bread. I know to be patient and genial when I have to explain that, no, it’s not OK to bring that hummus into our house. No, it’s not a good idea to give her a little bit to get her used to it. No, please don’t open that near her. Yes, your lunch could kill my child.

and although, thankfully, this following quoted portion does not end in a near-death experience for the author (although i can certainly envision it going that way), i just wanted to include it because what it describes is what i imagine heaven to be; what i hope will be waiting for me after my axe falls.

My mother instructed us not to touch the kittens, not yet, and we nodded gravely. As soon as she had gone back to the kitchen, however, I told my younger sister to keep watch at the garage door. Obviously, I reasoned to her, there was no way I wasn’t going to touch these kittens. No way at all. The keen joy of plunging in your hands and lifting up all four kittens in a mewing, writhing mass and burying your face in their aliveness, their softness, their miniature faces, their never-walked on paws: how could I forgo this? 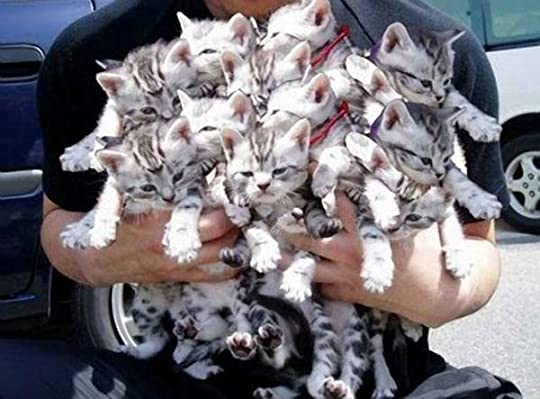 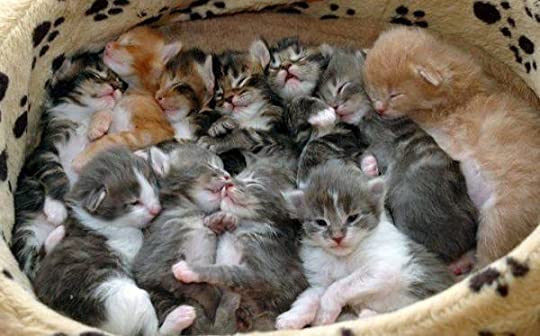