**now with all-new tragedy in the spoiler thingie!!**

hell hath no fury like a rich teenager accustomed to evading responsibility for her actions.

if you want to read about my personal journey through pain and terror and shame and eventual, tainted, triumph, you may click on this spoiler thingie:

View Spoiler » wow—now i know who gets off on hearing about how bleak and sorrowful my life is. noted. so, i had been wanting to get my hands on a copy of this book for ages, ever since all the YA queens on here had been gushing over it. it really sounded like my cuppa; bad girls, secluded community, murrrderrrr. i tried a few sites that kept listing it as being in stock, and then suddenly becoming unavailable just as i gave up my credit card info. bill thompson ordered me an outlandishly expensive copy, which eventually also turned out to be “unavailable.” this book was playing so hard to get, it made me want it even more, and then i was invited to participate in the book tour. awwww, the YA ladies are accepting me into their fold! i will be on my best behavior so we can nurture this relationship and they will not regret extending the hand of internet friendship to me! so i dashed off my email and street address, and waited by the mailbox. and waited and waited. and eventually, wendy darling contacted me and sweetly asked me if i had received it. and that’s when we realized, together, that i was a complete idiot. in my haste or excitement or exhaustion, i had managed to mis-type both my address, and my email address. wonderful. so the package was sent to an address that had one number incorrect, according to the USPS tracking system. on the site, there was delivery confirmation to an address that was close to, but not exactly, my address. no problem—i will go to the address and fetch my package. i wrote a lovely note and sealed it in an envelope, requesting that the person who mistakenly received my package either leave it with my super or arrange a time for me to go over and retrieve it. and then i went running out into the late-night rain to find this address. this address that does not exist. in a perfect world, it would be right across the street from me, but that is a gas station on its own island right before queens boulevard, across from which is the big six shopping plaza and this giant land of condos. i went there, anyway. i went on either side of my building. i went several streets over, because queens can be weird sometimes with its numbering. but nope—there is no such address. there were tears. and phone calls. and “oh my god they are going to hate me why did i make such a stupid mistake??” i am very sensitive when my actions inconvenience others. this is why i cannot understand people who litter, for example. i really hate letting people down. so i called greg and yelled at him, because i am a bad friend. and then he came all the way here and asked at the gas station if anyone had delivered a package there, because he is a good friend. and the gas station attendant was apparently a jerk. so, double thanks to greg who was out in the rain while i was bawling like a moose. so the very next day, i got to the post office a half-hour before it even opened, with the tracking number and everything—ready to hear that “why, yes we have your package right here!” instead, my postal guy just pointed me to the machine at the back when i finally got to the front of the early-bird line, and told me to look up the number. which i did. and got the same result as online—delivery confirmation to an address that doesn’t exist. so i got back in line, because i am—again—very very polite. and i got the same guy, and i explained that yes thank you i knew it had been confirmed, but i was just curious about where it had been confirmed, since there was no such address, and i was kind of hoping it had been brought back to the post office. so he toddled away and eventually came back and told me this tale: my regular postal worker was not working on the monday when the package came, and their substitute did not know what to do with it, so they did indeed bring it back to the post office. on tuesday, my regular postal worker returned to work, recognized my name, and knew where it should go. so he brought it to my building and left it in the foyer. excellent. so my super must have it! but my super did not have it. and it was not on the little table where people leave mail that isn’t theirs. and it was not on the radiator where people leave stuff they don’t want. and it had not fallen behind or under the radiators or tables, because i checked. and it was not in front of my door. and a really politely-worded note posted in my foyer for days and days yielded no book: 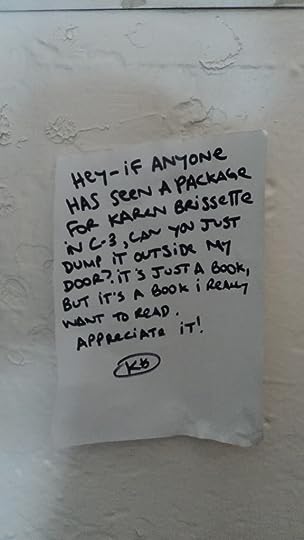 it was the worst. somewhere in my building, someone has that book. and i live in a really nice and friendly building where most people are either old-timers or young families. packages sit on that table all the time, without anyone snatching them. i have never had a package go missing, even when they have just been left in front of my door. why did it have to be the irreplaceable book that went missing? so then it was time to snap into action. wendy darling had been a sweetheart throughout this process, but that did not stop me feeling gutted and like the worst human being to ever ruin things for an entire internet community. i boo-hooed all over the internet, and people started to help me out. jen fisher found me a link to a copy on abe that was fairly expensive, but manageable. and connor contacted the publisher for me. my plan was to order a ton of copies from the publisher, and send them out to the next few people in line after me, to unruffle feathers and make sure no one would murder me. eventually, the publisher got back to me, and it seems the cost of shipping for even just one copy of the book would be more than 60 dollars. which kind of blew my plans. i would have willingly paid that for the book, but i am kind of resentful of the cost of shipping things these days. that is probably stupid of me, but it is a fact. and i am terribly poor right now. so i bought the copy on ABE, and it said it would be shipped in 6-16 business days, even though it was just in the middle of the usa. whatever, it’s fine. 18 days later, i still have no book. connor contacted the sellers, since we did it under his name and address just to prevent another book-theft. and they were all, “hmmm. it will be there in 2-3 days” but it wasn’t. and then they contacted someone and fixed something and eventually i had it. BUT AT WHAT COST??? wendy is still working out some magic on her end about getting more copies, but i am shattered still from this. my advice to you all is—if you get your hands on a copy of this book, do not let it out of your sight. there is something haunted about it, and all sorts of mayhem may visit you.

****i feel so much better now, because another copy went missing, and it had nothing to do with me! another poor person on the book tour was sent a package that somehow opened itself in the mail, and the book went one way, and the empty package went the other, and was delivered. how depressing is that—to get an empty envelope in the mail, knowing fury was inside of it? the horror!! but in good news, i sent my copy to them, and i have had confirmation that it arrived safely. let’s hope the luck holds…

what is the deal with this book?**** « Hide Spoiler

if you just want to read my book review, here it is. eliza boans is a staggeringly wealthy girl from a gated community with a tight-knit group of friends and a narrow worldview. and she has just committed murder. this book will give you the who, what, where, how, and most importantly, the why. lizzie’s got her reasons.

fyi—this is not a character you are going to love. even when she is being loyal and noble, she throws just enough of a catty edge into her speech to remind you that she is no one you would want to hang out with. but you wouldn’t have it any other way, and at least she is funny. sometimes you just want a good story about a rich snotty girl who does something deplorable and does not get redeemed at the end. it is way more realistic that a manipulative sociopath will remain a manipulative sociopath until the very end. considering she is basically raising herself, except when her mother breezes back into town with expensive gifts and stories of sexual conquests, it is pretty impressive that she has only killed one person. that we know of. the mystery is not that she killed, but why.

and as far as that mystery goes, it is not any big revelation. this reader has been around the block enough to spot a dropped hint. but as a character study, it is top-notch. eliza and her friends are fascinating. there is more at work here than just a group of modern-day furies enacting justice on their own terms. it is not simply shallow bored rich girls with an axe to grind. these are inconsistent characters with no self-awareness who operate purely on impulse. especially eliza. her inner thoughts are terrifying and she is not only an unreliable narrator, she is also wildly self-deluded. and it is very striking to watch all of this play out.

considering what i went through to get a copy of this, the book had a lot of unreasonable expectation and anticipation to fulfill. and it mostly succeeded. this is a great new addition to the world of aussie YA. jane austen fans—rejoice—there are a lot of bonnet-tips here. and a character named jane ayres, which should make me want to barf, but somehow, in the context of all the other allusions, works just fine for me. i would have liked a bit more neil, and a bit more closure, but this is a solid book that will maybe someday be easier for y’all to get.

and now i await my orders.

baby’s first twitter review @karenbrissette! which i still don’t understand, because don’t tweets have to be under a certain character-number? i am new to this! m’aidez!!