yeah, five stars cats, what of it? i was ready to give this one five stars cats just on premise alone: a massive hurricane in florida isolates an amusement park full of workers entrusted with keeping an eye on things after the customers have been evacuated, and despite having plenty of food, water, medical supplies and shelter, once they are rescued by the national guard a month later, the place is destroyed, many have died, the survivors are injured, and on top of the staggering property damage, there are also corpses hanging from wires, heads on spikes, tales of spectacle-murders, cannibalism, and the warriors-style themed-gang affiliations and epic battles that led to all this violent devastation. 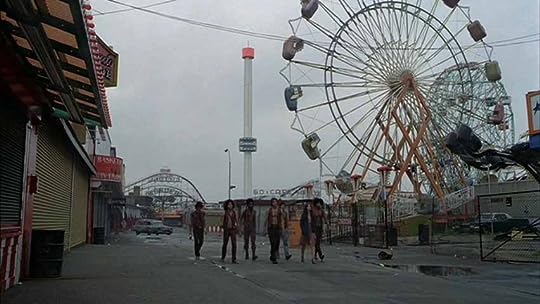 this is my kind of awesome.

it’s told as a series of interviews from survivors, rescuers, people evacuated before it all went down, lawyers, the park’s owner, etc. collected by a man writing a book on the incident, so it has the same general shape as World War Z: An Oral History of the Zombie War, but on a smaller scale, where you get a piece of the puzzle; one perspective of the horror, before moving on to the next fresh hell. it’s vivid, wonderfully gory, and as absurd as it seems on the surface – that people would deteriorate into Lord of the Flies lawlessness in under a month – given the circumstances, the participants, the escalation, the book does a good job making it seem like something that could totally happen. there’s an afterword that’s a little weak – some sort of too little, too late attempt to guilt the reader into a self-examination of why we are so entertained by violence that has been done, and much more elegantly, by so many others. this is not a book that should be trying to stimulate moral unrest in the reader – this should just be a straight-up romp of blood and brain matter.

despite how violent it is, i think there’s crossover appeal for teen readers. the characters are mostly late-teen, early-twenties, and the whole “we are separating ourselves into groups based on really superficial characteristics” is pure YA-adventure trope. (there’s even a nod to the The Hunger Games & etc in a chicks n’ crossbows sequence.) 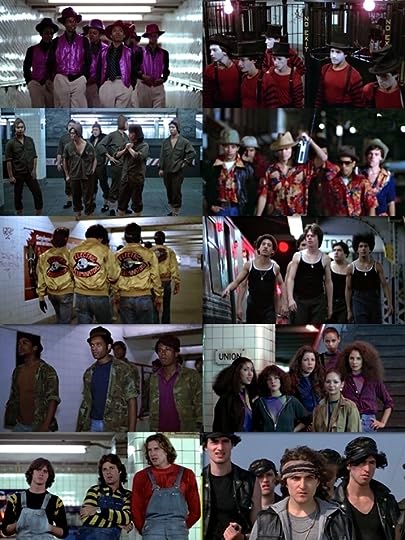 the groups here are not dauntless or district 12, they are deadpool, the pirates, the robots, the shopgirls, the mole men, the freaks, the short-lived fairy prairie, and the unaffiliated few. also, the warthogs, which are the absolute coolest pair in the book and were very wisely left mysterious, so their chilling ways were much more effective. BEST CHAPTER EVER!

me, i’d probably be with the shopgirls. i have an overdeveloped work ethic that makes it seem like the most sensible thing to do in this situation is protect thy inventory with bow and arrow, ‘cuz that’s your job, even if no one’s gonna give you a raise for it. or pay for your funeral expenses. however, i have a soft and mooshy place in my heart for the freaks, and i definitely have a book-crush on glenn guignol, who is played by jim rose in my head. 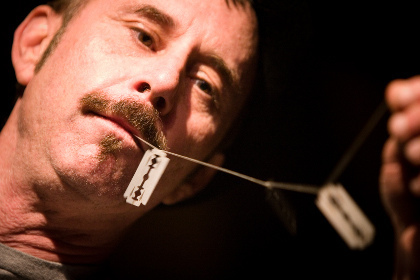 there’s only one thing i’m confused about. it’s not a true spoiler, but it involves some plot-dissection that will probably be useless to anyone who hasn’t read the book, so i’m gonna spoiler-tag it so no one gets bored. View Spoiler »the book’s stance on rape is odd. for those of you with triggers, there is no rape in this book. it’s mentioned, and there are assumptions, because the pirates are grabbing girls from other groups and taking them back to their lair, but while they are totally okay with killing people, the pirate leader does not condone rape, however, his reasons are only because of stds and babies. now, i totally understand why an author wouldn’t want to write about rape. you can make stabbing someone in the eye fun, but there’s no way to make rape fun. but when there’s so much consensual sex going on, you cannot use stds and babies as a reason to veto rape. and just how long did they think they were going to be trapped in this amusement park, where that would be a concern? or alternately – how long did they think they were going to live? because the life expectancy in here is short and no one’s gonna have to worry about chlamydia here. and there’s also a “respect your women” argument expressed for why you should avoid having too many partners in the sack in case they get jealous and fighty, which also doesn’t really wash when you’ve already, you know, murdered a bunch of females. this is all reported from a member of the pirates, and not the leader himself, so there’s a possibility there’s more to it than that, but from what is explicitly on the page, it’s illogical. you may not want to write rape, and i applaud you for that, but you have to give a better reason for its absence, because there’s no way it wouldn’t have been happening once dismemberment and decapitation were on the activity-board. « Hide Spoiler

that’s all i have. it’s a fun, fun book. warthog sequel?

finally got around to reading this one and now i double my advice to those of you in theme parks – get OUT! even if there’s no hurricane.

but seriously, stay safe, my friends… i will be thinking about you.