Dora: A Headcase by Lidia Yuknavitch
My rating: 3/5 cats

so, if you like this character’s voice, you will like this book. if it grates on you, you will find this book a drag. me, i am halfway in-between. i didn’t mind it sometimes, but there were moments where i was wicked annoyed by how forced and deliberate the “cool” and “unique” voice was.

I shove the last of the bacon in my mouth. It’s salty and rubbery yet crisp. What is bacon but fat and gristle and thin strips of ass meat? tastes like… family.

i spent some time eye rolling and imaginary character head-petting, “yes, yes, you are very very cool, ida/dora… putting safety pins in your t-shirts is very cool. creating “art attacks” in the mall and at restaurants and picking your nose to gross people out, and cutting and drugs and oh my, kissing a girl, how very edgy.”

so on the one hand, you are yawning because of the strain of how impressed you are supposed to be with these rich girl punk rock antics, and on the other hand, you are thinking OH MY GOD, I USED TO BE SEVENTEEN! some of this seems so embarrassingly familiar. but it was cooler when i did it, i assure you. 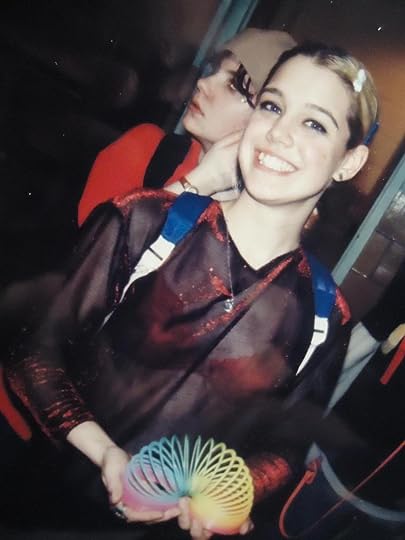 well, maybe not. but i always wore clean underwear, so i am one up for hygiene.

how you personally react to this book will depend on whether you are the owner of the lawn, or the punk kids taking a dump on it.

a lot of it is showy artpunk nonsense, and no, thank you, i do not want to watch your film, nor read you describing it and telling me its meaning at the same time. i seen teen-rebellion before. live.

but then there are these other, quieter moments, that are truly lovely. basically, any scene with marlene, ida/dora’s rwandan tranny bacon-frying bestie, is going to be worth reading the book for. these parts of the book read like francesca lia block, who has that effortless, floaty quality to her scenes, and whose shock value never seems quite as forced as some of the ones here. but these particular scenes evoke genuine emotion, not the brittle front she is putting up elsewhere.

this is another book that would probably do all right with a YA crowd—it’s a little rougher than usual YA, and it is not marketed to them, but i think if anyone’s gonna not be annoyed by a feisty teen voice…

don’t be mad at me, keri!! i did like it, i’m just feeling particularly old and cranky tonight.write a better review than me—that’ll teach me! but even you have to agree that even on the page, ave maria was the worst. i would kick her shrieking ass out of the store the second she set foot. no lie.