before i dig into the review, a quick reminder that three stars cats means I LIKED IT, OKAY??

the only reason i didn’t LOVE IT is because of my own personal preferences when it comes to the various subgenres of horror. i like psychological and visceral horror. i do not like folk or cosmic horror.

having said that, i didn’t dislike any of these. the collection features a strong stable of authors, and the stories themselves are pretty long, so even when an individual story belonged to one of those categories of horror i dislike and the tropes went a-troping into hypnotic black holes and human sacrifices because tradition, the authors had enough space to give me something more than the sum of its tropes, and i enjoyed the parts i could enjoy.

creepy, slow-burning psychological horror. it has a bit of a megan abbott feel to it—her brand of dark coming-of-age exploration into the dangers young girls can stumble into whilst navigating the newly discovered terrain of their sexual opportunities. it’s an uncomfortable and tense story, but it lacks the finesse, the fineness and subtlety that abbott brings to these themes. this one is like an urban legend version of a megan abbott scenario, where the female characters are more broadly depicted as cautionary tale victims without any of the dark, delicious adolescent power abbott bestows. i do not know why i’m so hell-bent on doing a compare-and-contrast piece on these two authors, but at least i committed to the exercise. the only other thought i have about this one is that the ending was weak and tacked on and it really deflated the narrative for me.

A Life in Nightmares—Ramsey Campbell
★★★★☆

this one goes on down to cosmic town at the end, but before that, i was really enjoying the slippery dream-within-a-dream shape of the story; the author’s skillful manipulation sending me into a succession of tightly controlled spirals and echoes, the very familiar and palpable sensation of waking up in that blurred state of not knowing what’s real and what’s a dream—he replicated the sharp tang of dreamfear disorientation perfectly. and then he had to go and get all lovecrafty on me and i said “no thank you, sir!”

i guess this is technically folk horror, but it’s truly the gentlest horror story i’ve ever read. i was really looking forward to this one, because Rag and Bone and Fabulous Beasts were extremely good stories (and judging by my four-star rating, i also liked The Anatomist’s Mnemonic, but since i never reviewed it, i do not remember what that was even about—whoops). the writing is good, i just wasn’t very excited by the story. which is a me-problem.

people who dig cosmic horror will probably gush all over this one because even though iiiii don’t enjoy it, i can still identify an objectively good version of a thing i don’t subjectively like and this one is objectively good. it’s got a cryptic antiheroine at its center—a ragey social con-artist with…some kinda magical/supernatural capabilities i didn’t fully understand, and the way the story builds is great, until it got the the part i really didn’t understand because cosmic horror is a tease that never wants to tell you what it is you’re supposed to be afraid of.

All the Things He Called Memories—Stephen Graham Jones
★★★★☆

this is the first covid horror story i have ever read (i mean, besides the news). it’s about what happens when you’re forced to quarantine with a mad-scientist spouse and what her experiments might unleash. it is legitimately creepy and now i’m afraid of pockets.

this one is closer to urban fantasy than horror, although the heavy bird content pushes it into my own personal horrorverse. it involves horror nouns, like ghosts and demons and possession, but they aren’t used in a horror way if that makes sense. it’s more metaphorical than spooky, about loss and ambition and sacrifice, and it’s another story that’s written well, but just not my personal cuppa.

like the two full-length books of hers i have read (The Deep and The Hunger), her writing is smooth and measured and she knows how to pace a story, but honestly? it’s not the most envelope-pushing horror story of all time. but it’s also that i feel like i’ve reached my saturation point w/r/t vampire stories, and i’m not sure what it would take to impress or surprise me in that vein (hardy har), but this isn’t it.

this could probably be a four, my ratings are fluid. it’s an interesting premise, and the prose is so cinematic that it feels like a pitch for an episode of some horror anthology-type show i would binge-watch the hell out of.

this was the most delightful surprise of the bunch. years ago i read this author’s A Book of Tongues and i hated it, so i was kinda dreading this one. but i ADORED this story, and it was my favorite in the whole collection. it, too, is more urban fantasy than horror, which is a genre i do not often read, but i would happily read more—many, many more—stories, novels, whatever about this character and this world because i freaking loved it. it’s bloody wonderful (hardy har reprise).

this was very similar to the ramsey campbell one in both its cosmic horror leanings and its inception-y* line-blurring between dream and vision and reality and yadda, but this one had more characters to keep track of and, coupled with its aggressive vagueness and the author pushing and pulling the reader into different half-detailed scenarios was a wicked confusing experience and i admit i lost the thread of it pretty early on, and then i realized i didn’t care enough to go back and finetooth-comb it for meaning so i just let it carry me to its dissociatively vague ending, shrugged, and moved on.

*although the tattoos-as-notes-to-self are a nod to a different christopher nolan movie. 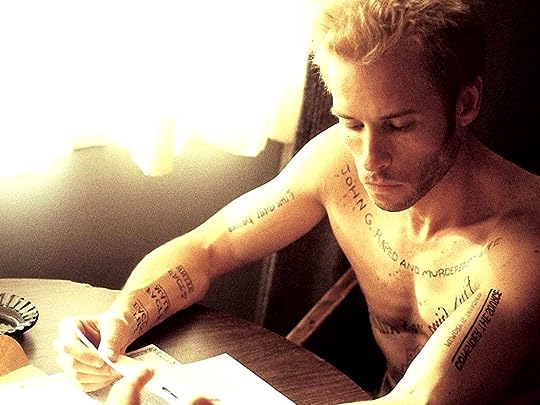 more folk horror, but i preferred this one to Papa Eye, because it’s more much layered—even though the ending is inevitable given the genre, the stories branching off the trunk of the main plot are both their own things and thematic contributions to the main story, making it a richer reading experience all around. fuck, i’m a pompous douche sometimes.

a very classic feeling horror story, putting a coat of supernatural frosting on the story of a murderer. langan takes his time to tell this one, but that is in no way meant as a criticism. i definitely appreciated the care he took with his storytelling —the slow creep of the horror felt purposeful and inexorable. but, like vampires, View Spoiler »i might be all wendigo’d out « Hide Spoiler. for some reason i have encountered them a lot lately IN MY READING and the novelty has worn off.

i’m not in love with the cover, but the guest list is OUTSTANDING! i’m gonna chip away at this for a while to get those ‘spooktober in springtime’ feelings.