The Sisters of the Winter Wood by Rena Rossner
My rating: 3/5 cats

man, i was so looking forward to this – it seemed, from the description, to be exactly my kind of book; one blending fairytale sensibilities with realworld atrocities à la Gretel and the Dark, with girls shapeshifting into bears and swans, and coming as it did in an envelope full of bear n’ swan confetti and GOLDEN FEATHERS, Y’ALL! 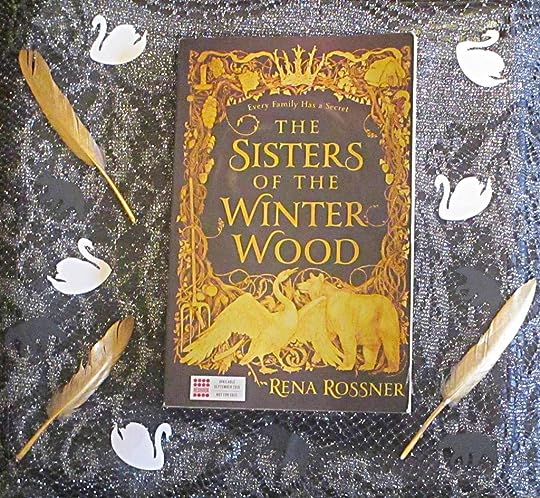 and, because those bears are too good at camouflaging themselves: 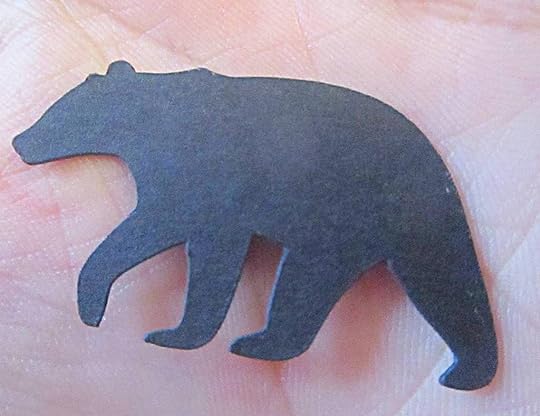 feel free to read my palm!

knowing it was an unusual blend of rossetti’s goblin market, jewish folklore and history (anti-jewish pogroms in moldavia and ukraine), i was looking forward to something dark and surprising. and it was surprising, just not in a way that pleased me, although it clearly pleased many other readers, so feel free to disregard any and all of my own personal gripes.

it is sort of dark historical fantasy, but its front-and-center taxon is YA fantasy romance. even though it lists and is priced as adult fiction, it does not seem to offer as much to an adult reader as it would to a teen: the characters are teen girls, very sheltered, whose parents are called away unexpectedly, and they are forced to take responsibility for themselves for the first time – keeping themselves fed and out of trouble, but also with their strict, religious parents out of town, they’re free to let their repressed sexuality off the chain a bit, and even though people in their village are going missing and the news of the pogroms targeting jews reaches them, that is largely in the background, and it really is mostly a story of duty and desire as it relates to boys – liba likes a boy who is tender and chaste and devout, but she knows he is not who her parents would choose for her husband. meanwhile, laya is seduced by a bad boy and made giddy by the temptations of fruit and freedom, and they are both discovering their shapeshifting abilities (i.e. their changing bodies); liba = bear, laya = swan, which are manifesting alongside all of these confusing new feelings.

so, thematically, it’s very YA: a coming-of-age, emotional/sexual awakening story, where the parents are conveniently absented so the sisters can begin to make their own decisions and take on adult responsibilities and their characters can be tested for the first time as they become independent young women. but the balance is heavily slanted towards the individual rather than the historical – there is so much time spent on the inner battle of permitting/suppressing the body’s urges, and liba being ashamed of her curves, her appetite (for food), her sensuality, her wild inner self, and so little time spent on, you know, the ethnic massacres occurring offstage.

did i want graphic descriptions of torture and murder? no, but it’s such a superficial treatment of historical brutality – i thought it would be used as more than a backdrop for romance. if this is supposed to be adult fiction, the expectation is that it will explore themes more meaty than ‘first kisses’ and ‘establishing an identity apart from the family.’

i personally find the romance parts of books tedious, so a book with this much “will they or won’t they?/should we or shouldn’t we?” is wasted on me. and it’s even worse when it occurs in laya’s chapters because her POV is written entirely in verse:

his lips touch mine
and everything around us
disappears. I drink him in,
ravenous, I can’t get enough
of his lips, I nip at them
and tug at his tongue
with my teeth,
sucking on his lips
like they are life
and air,
like I am thirsty
and his lips
are an oasis
in the desert.
I feast on them.
On him. As
every
thing around me spins.
He breaks the kiss,
both of us breathless, eyes wild,
lips swollen
and red.
I shake my head
and rub my eyes
trying to clear
the glare, the fog.
I lean in again
so close, my lips
almost at his,
and beg for more.

there is never any reason given for the decision to write her segments in verse, and the whole “everything is poetry!” mentality so pervasive these days is bad enough when it’s all that kissyface stuff, but the “i have found the return key!” attitude is even more baffling when it’s fancying up life’s most banal moments:

Liba didn’t wake up
early this morning
like she usually does.
I’m worried about her.
I’ve never seen her
like this.
Sad, quiet, thoughtful.
So I get up
and do the chores,
and let her sleep.

so that’s where i’m at: a crank who’s too old to be reading about teenagers in love, too widely-read to be impressed by metaphors already encountered elsewhere, too appreciative of the dark and gritty to have it be sidelined. unless you are me, sleepwalking, you are a different reader with different preferences – fans of The Weight of Feathers would probably dig this.

i will say that i liked the author’s note very much, in which rossner discusses her intentions and inspirations, both historical and literary. i wish more of that had found its way into the story.