one of the last social events i attended before the pandemic shut nyfc down was an end-of-february cocktail party showcasing a bunch of PRH’s summer releases, and this book was one of them. the memory of the evening is, to me, marked by a bittersweet nostalgia for that carefree time when one could mingle unmasked amongst other booknerds, sipping fancy alcohols and chatting, getting home safely and uninfected.

to segue with EXTREME GRACE into the actual book-review part, the character whose “true story” is at the center of this unclassifiable debut is a woman named alice who, as a teenager, also spent an evening drinking at a party before passing out in the backseat of the car driving her home, waking up the next day with no memory of the sexual assault the teenage, lacrosse-playing driver and his teammate-pal are bragging about committing upon her while she was unconscious.

the novel takes place over the next fifteen-or-so years, but it is far from a straightforward narrative—it shifts repeatedly between various genres, formats, and POVs into something resembling a mash-up between Brief Interviews with Hideous Men, Thirteen Reasons Why, a lifetime original movie, and some A24 film.

the story of that night’s events and its aftermath comes out piecemeal in emails, transcriptions of audio interviews, successive drafts of annotated college admission essays, and screenplays; it crosses from realism over into horror and stylized noir; it mixes up fact and fiction and memory until the “true” part of the story is as muddled to the reader as it is to alice herself.

the constant changeups make this an incredibly fast read, and one very hard to put down—it destabilizes the reader with what is essentially one hook after another, and before you ask—yes, virginia, there is a closure.

at that pre-plague cocktail party, the author was discussing how early readers of this novel kept commenting to her about how “timely” it was; what with the me too movement, its subsequent trials and the slew of survivor memoirs and polemical feminist texts that were suddenly dominating the publishing industry.

and then she revealed that she’d begun writing this in 2015, which is funny and ALSO depressing.

another thing that is both funny and depressing is that here we are, and now this book is being released into a world transformed, where the subject matter is no less timely or relevant, but it has become somewhat o’ershadowed by…well.

it’s an inventive way to tell a story whose details are all-too-“ripped-from-the-headlines”-familiar: the victim blaming, the protective closing of ranks around the accused, the gaslighting, the gulf between truth and memory or truth and belief.

for alice, the incident derails her life—not only what was done to her, but the slut-shaming, gossip, and rumors that followed, leading to the predictable fallout: a suicide attempt, an abusive relationship, and feelings of shame and low self-esteem hounding her as she grows into adulthood shaped by her damage.

ironies abound here: alice becomes a professional ghostwriter—someone who can’t remember her own story helping other people tell theirs—who is being pressured by her documentarian friend haley into telling her story, which, for all the effects the traumatic incident has caused, is somehow not really “hers,” as she tries to explain to haley:

You’ve always been the one who was brave—no, the one who was sure. You’ve always been so sure of the story you want me to tell, the story you’ve been asking me for since we were seventeen: The story about the things that happened while I was asleep. “It’s your story,” you would say. “If you don’t let it out, it will take over your life.” But the story is mine only as the victim owns the prosecution, or the whale the harpoon. Telling it has always been the privilege of the perpetrators, who have the actual facts, and of the bystanders—like you—who believe they know.

it’s a messy situation told in a deceptively messy way that’ll surprise you with how tidily it resolves. i’d probably go on longer if megan abbott hadn’t already reviewed this better than i ever could.

i will confess that i am unreasonably angry at the UK cover for being so awesome: 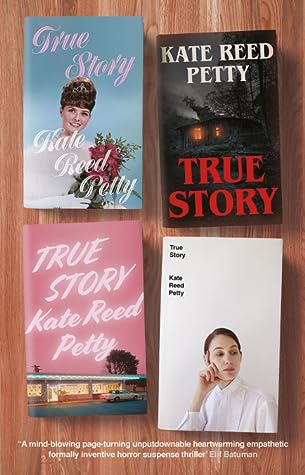 and soon, there will be a photographic update to this review. INTRIGUED?

as promised, a photographic update. it is also my birthday week, so i’m counting this as a present!

tadaaa!!! because plague, book tours aren’t happening, so kate reed petty did a postcard tour instead! there were options—i chose one from the cabin sequence for reasons obvious to anyone who’s read the book, and i love it!

it reminds me of home but ALSO gives me chills, for reasons obvious to anyone who’s read the book. please do not laugh at how inexpertly i affixed mine into the book with my (included) photo corner stickers.

hear that, literary culture?? I DO THINGS FOR YOU!! feel free to send one of your representatives to hire me to do more of those things.